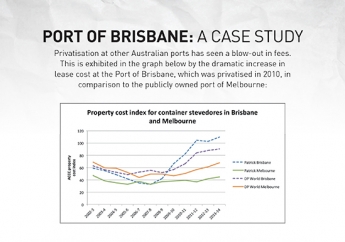 The Maritime Union of Australia (MUA) is demanding that Northern Territory Chief Minister Adam Giles release a secret consultant’s report into the privatisation of Darwin Port.

Melbourne-based consulting firm, Flagstaff Partners, has been advising Mr Giles on the privatisation but the chief minister refuses to share this information with the people of the Northern Territory.

Flagstaff Partners has been connected to the controversial East-West link in Victoria and the privatisation of the Port of Melbourne; which was lambasted in the media this week for increasing the rents of stevedores by 800 per cent.

Flagstaff is dominated by bankers and accountants from ANZ, Deutsche Bank, KPMG, and Ernst and Young. These types of companies profit directly from privatisations: Reuters predicted in February that upcoming Australian privatisations could generate a $1 billion ‘bonanza’ in bank fees.

MUA Branch Secretary Thomas Mayor said: “Territorians deserve to know who will benefit from this move. The Flagstaff report must be released. So far it looks like Mr Giles is more interested in having secret discussions with Melbourne bankers and accountants than listening to Territorians.”

A Senate Committee recently heard that banks, accountants and consultants make at least 5-6 per cent of Australian privatisation transactions.

This week, Asciano chief executive, John Mullen was quoted in the Sydney Morning Herald as saying that privatisation and the related price hikes would cause long-term harm.

"It's a golden gravy train for state governments, investment banks and consultants, but ultimately it’s local industry and consumers that are left to pay the bill," Mr Mullen told the SMH.

Mr Mayor said the port of Darwin substantially increased its fees for ships last month, in a move that will undoubtedly be passed onto exporters and importers and then consumers.

“Based on the results of privatisations in other ports, rent increases for stevedores are likely to follow. It will also have a detrimental effect on the remote communities that rely on the port for their goods and essentials,” Mr Mayor said.

He said the cost of living in the Northern Territory was already substantially higher than the rest of the country and that an added burden would be unsustainable for many families.

“We know that the privatisation of Australia’s other ports has left Australians short-changed. South Australia sold their ports on a 99-year lease for $186million in 2001. Last year those ports turned a profit of $22million and paid out dividends of $25million,” he said.

“It’s obvious that in the long term, South Australians will miss out on millions of dollars of public revenue a year.  In addition, new infrastructure investment by the leaseholder has been directed to benefit its own subsidiaries that are now in competition with existing stevedores.

The MUA made a submission in the Territory Government's Inquiry into the privatisation of the port. Our document can be read here. 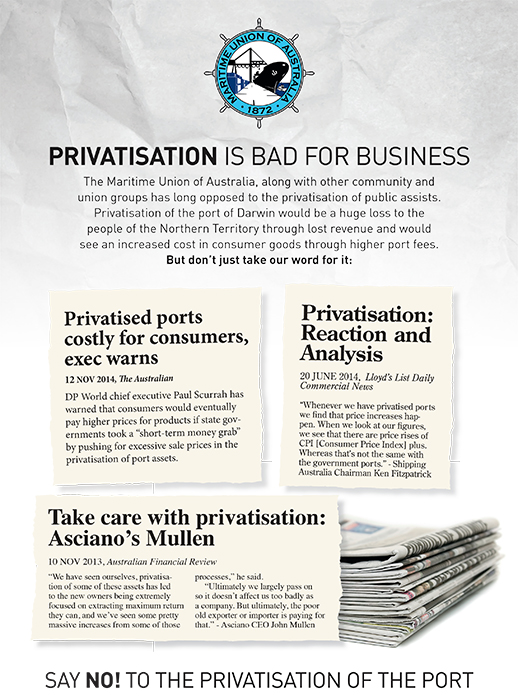 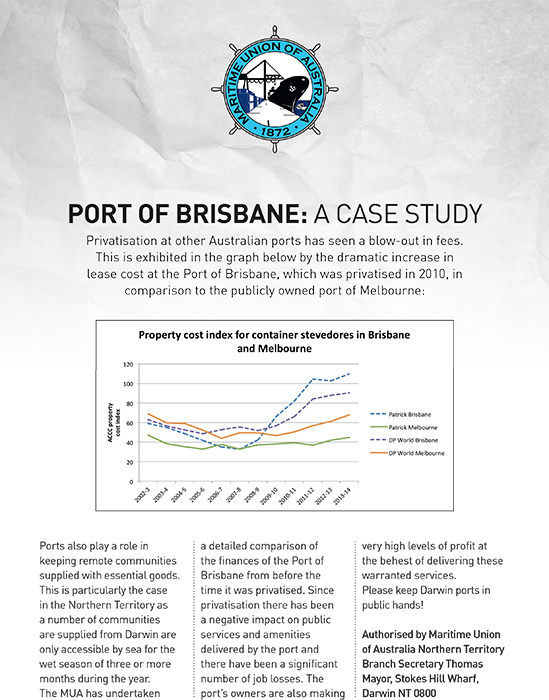