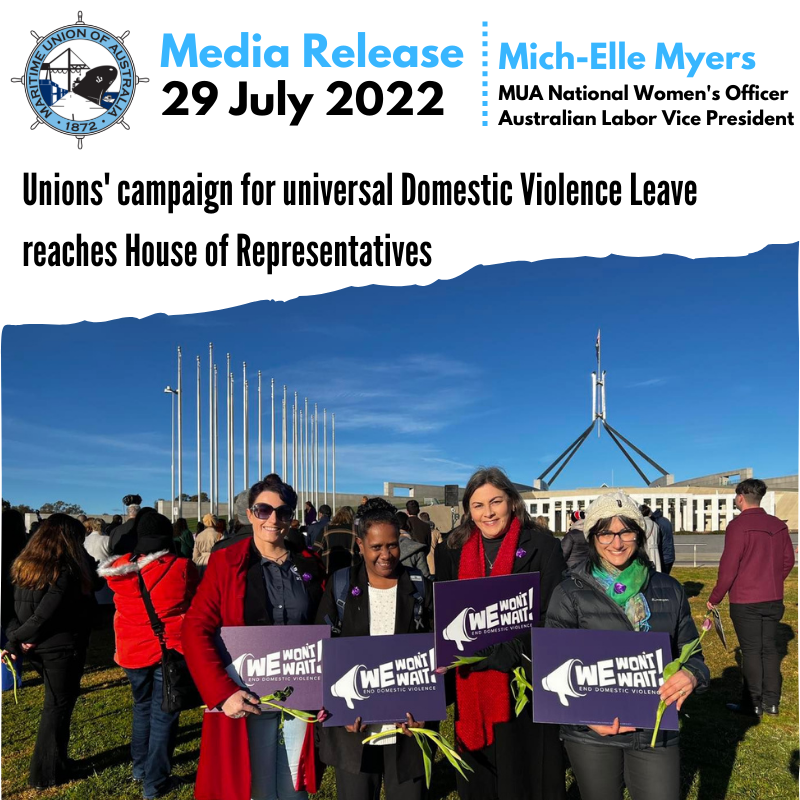 On the lawns outside Australian Parliament House this week, trade union members, domestic violence service workers and health professionals from around the country gathered to mark the impending introduction of a Bill to Parliament that will deliver 10 days’ domestic violence leave in the National Employment Standards, providing protection for women in every workplace and every industry with a base level of financial security to assist in escaping violence.

Led by the Australian Services Union’s NSW & ACT Secretary Natalie Lang, and joined by the Prime Minister, Anthony Albanese, and Labor’s Minister for Employment and Workplace Relations, Tony Burke, as well as dozens of MPs and Ministers, the assembly heard from campaigners and activists about the importance of this reform and the long road to its delivery.

Beginning in 2009, lifelong advocate and domestic violence support worker Ludo McFerrin began the campaign for inserting domestic violence leave provisions in to new Enterprise Bargaining Agreements, with the first such clause being won by ASU workers at the Surf Coast Shire Council in Victoria in 2010.

The campaign to expand this workplace entitlement to other industries and workplaces was taken up by members of the trade union movement nationwide, eventually becoming a reality for 1 in 3 workers covered by Australian EBAs.

Speaking to the gathering outside Parliament House, domestic violence workers explained how pay data and financial activity could be used by coercive and violent partners to track their partners and could reveal absences from work.

“That’s why the Maritime Union of Australia has been steadily negotiating and finalising agreements throughout the waterfront and seagoing industries which include domestic violence leave for its members at EBA rates of pay, so that when it is taken by a worker it isn’t apparent in their fortnightly pay,” said Mich-Elle Myers, National Women’s Officer for the MUA.

“The MUA is incredibly proud of our members and delegates who were early, staunch supporters of this important reform. Every member who joined the campaign, signed petitions or took selfies with a sign supporting DV Leave has contributed to the collective victory this in seeing it introduced as a new national employment standard,” Ms Myers said.