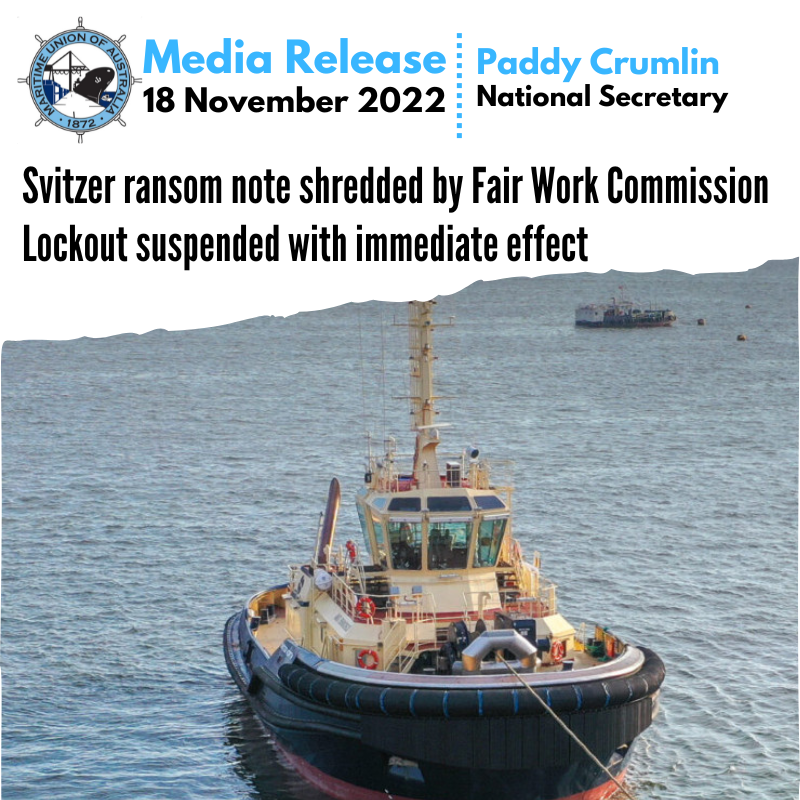 The Fair Work Commission has suspended the planned lockout of tugboat workers around Australia by Svitzer bosses and ordered a return to negotiation for a new employment agreement for the almost 600 seagoing employees of Australia’s largest tugboat operator.

For the past five days, Australia has been on the brink of economic and social chaos brought on by corporate pirates at the Danish-owned multinational towage company. As recently as last night, Svitzer was doggedly pursuing its planned lockout of over 590 tugboat workers around the country. The Fair Work Commission has suspended that lockout and directed that negotiations resume between the parties for a new employment agreement.

“Svitzer’s bosses have been held to account today and against their parent company’s public assertions of having one of the world’s most progressive ESG frameworks, they have been diminished in the most humiliatingly public way possible. Svitzer have demonstrated they are reckless and negligent in their management of a near-monopoly at seventeen Australian ports,” said National Secretary of the Maritime Union of Australia, Paddy Crumlin.

“After five days of holding the entire nation hostage, Svitzer’s outrageous demands have been refused by the industrial umpire,” he added.

“The three maritime unions have sought to negotiate and bargain in good faith for almost four years but we have been thwarted in that by a management team hell-bent on triggering harmful disputation and industrial conflict though goalpost shifting and obfuscation. They then sought the nuclear option of termination and a pay cut of 47% for our members, but the Fair Work Commission has given them a significant signal today that this campaign of corporate cynicism and negligence could not be tolerated,” said Mr Crumlin.

The lockout by Svitzer’s local bosses was to commence at midday today, but the Fair Work Commission’s suspension will ensure the 590 workers nationwide will be able to present to work and perform their duties.

“Tugboats are an essential link in the nation’s supply chain which operate 24 hours a day, seven days a week. Their work is highly-skilled, often dangerous, and crucially important to the prosperity and security of our nation,” said Mr Crumlin.

“That’s a responsibility that these workers and their families take very seriously, and it’s why the limited industrial action they had been taking was always low-impact, administrative action rather than lengthy work stoppages. So the proposed lockout by bosses was always a completely unreasonable and extreme overreaction by Svitzer and it couldn’t be allowed to go ahead,” Mr Crumlin said.

Today’s decision by the full bench of the Fair Work Commission states:

This is line with the Union’s offer on Wednesday to suspend its industrial action notices until after Christmas to allow parties to return to the negotiation process while Australian shipping movements could continue as normal during the festive period.

“Svitzer have an opportunity now, and indeed an obligation, to return to the process of good faith bargaining and work on repairing the relationship with their workforce. They can do that by withdrawing their application to terminate the existing employment agreement which is still on foot and take the ridiculous threat of a 47% pay-cut off the table,” Mr Crumlin said.