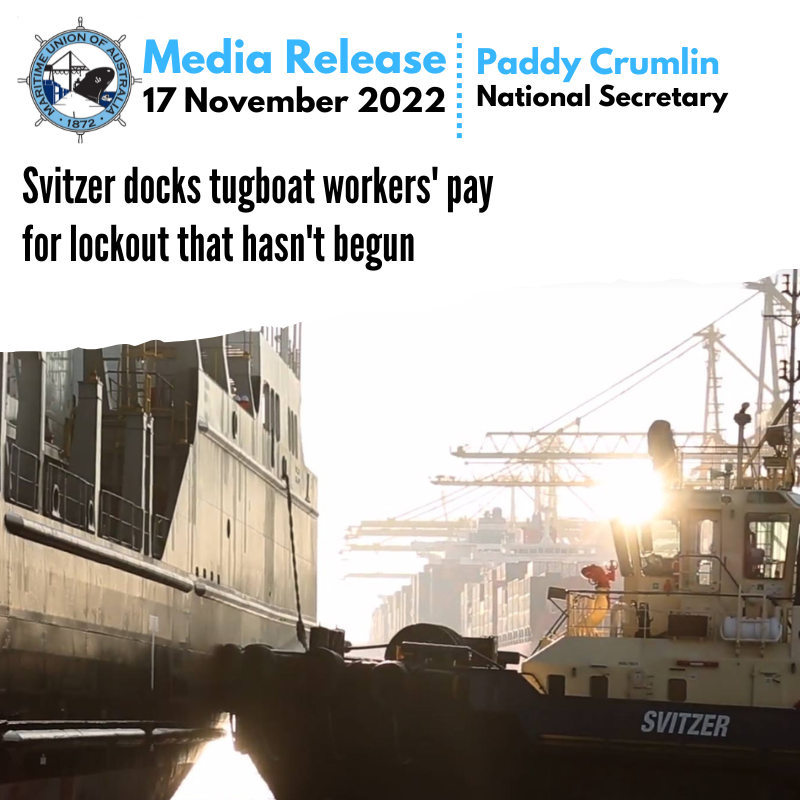 In the latest escalation of an employer-led campaign against Australian tugboat workers by Danish multinational towage company Svitzer, tug crews around the country have already had their fortnightly pay docked in payroll overnight for the planned lockout of workers by management on Friday.

“This demonstrates how brazen and contemptuous of their employees this company has become. While the Fair Work Commission was asking Svitzer bosses to voluntarily withdraw their lockout, the HR and Payroll team was busily docking wages in anticipation of an indefinite lockout,” said MUA National Secretary, Paddy Crumlin. “Clearly they are not happy having achieved a four year wage-freeze, now they’re summarily docking people’s pay for a lockout that hasn’t and hopefully won’t happen yet,” Mr Crumlin said.

There is a very real possibility that the Fair Work Commission will – at a full bench hearing today – halt the Svitzer lockout and order a return to work despite the company having now failed to fulfil its payroll obligations.

“This amounts of course to yet another gratuitous act of aggression against their employees who will in all likelihood be returned to work on Friday,” Mr Crumlin said. “It is consistent however with their intention all along to detonate the industrial bargaining process regardless of any economic and industrial damage this would cause,” he said.

After offering before the Fair Work Commission to withdraw all union industrial action in exchange for the withdrawal of the bosses’ planned lockout, the MUA wrote to Svitzer managing director Nicolaj Noes yesterday with a formal notice of withdrawal of all forms of Protected Industrial Action. This means the only industrial action on foot is the Svitzer lockout set to commence at midday on Friday.

“At every turn, the three maritime unions have and will continue to offer a good faith approach regardless of these provocations,” said Mr Crumlin.

“This company extracts hundreds of millions of dollars from the Australian economy through a de-facto monopoly operation and sends it offshore to Copenhagen. Not meeting their obligation to pay these workers, who are ready to work, reflects Svitzer’s view of their obligations here to Australia and Australians. Again, we appeal to them to desist and return to the table to finalise a new agreement in good faith,” Mr Crumlin said.