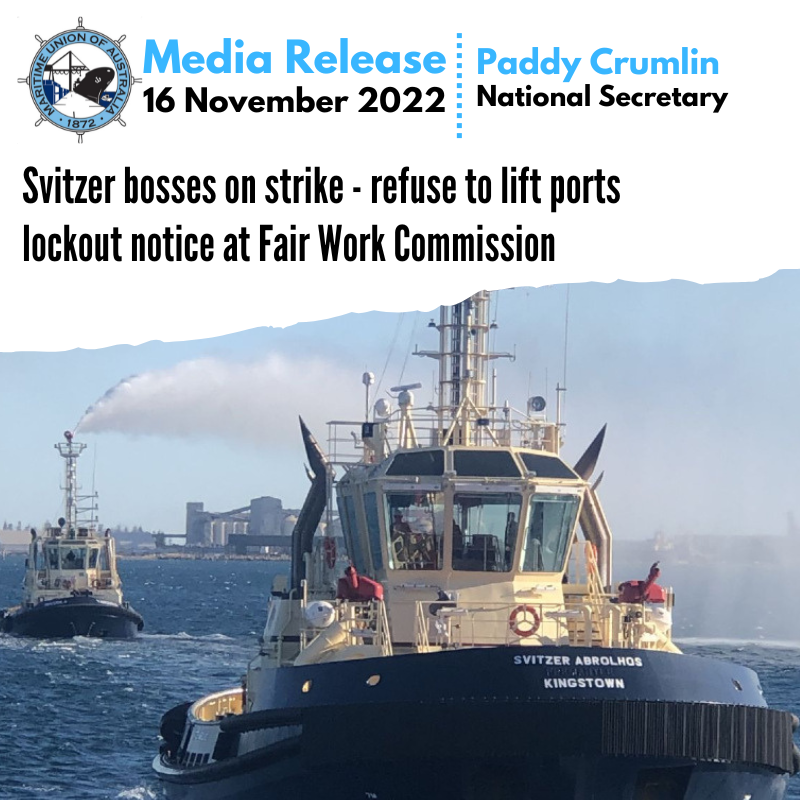 Svitzer’s bosses are on strike, not their workers.

At a meeting facilitated by Fair Work Commission Vice President Hatcher, Svitzer Towage bosses refused to voluntarily withdraw the lockout threat which looms over 17 Australian ports nationwide, prompting the Maritime Union of Australia to call for an inquiry into how Australia’s supply chains have been allowed to become vulnerable to employer-led militancy.

“We have seen Svitzer’s international bosses stuff a ransom note in the mail flap of the Australian community on the cusp of Christmas, to shake down the entire nation under threat of economic and social chaos for no greater purpose than their own profiteering,” said MUA National Secretary Paddy Crumlin.

“This company’s social licence to operate should now be in doubt, and an inquiry into how a multinational Danish owned company can be allowed to hold an entire country to ransom through this campaign of employer-led industrial militancy must be held so we never again find ourselves vulnerable to this corporate piracy,” Mr Crumlin said.

The Fair Work Commission has signalled that it may intervene formally to prevent the economic and social chaos of a nationwide port shutdown but gave company bosses an opportunity to withdraw their threat voluntarily and return to good-faith bargaining.

Vice President Hatcher had asked that Svitzer engage in a conciliation process this week to avert a supply chain disaster on Friday, but Svitzer’s management team refused.

Accordingly, with the bosses’ lockout of tugboat workers still looming large over the national economy, tomorrow a full bench hearing of the Fair Work Commission will consider whether to suspend or terminate the lockout threat made by Svitzer Australia management.

All three unions representing workers employed at Svitzer Towage – the MUA, the Australian Institute of Marine and Power Engineers (AIMPE) and the Australian Maritime Officers Union (AMOU) – offered to withdraw any further industrial action until beyond Christmas so that good faith bargaining could resume, however, the company refused to agree to this proposal and is persisting with its planned lockout on Friday.

“This amounts to a war on workers, a war on consumers, on households and businesses throughout the supply chain. Svitzer bosses’ dogged refusal to withdraw this lockout will destroy Christmas 2022 and bring our economy’s post-COVID recovery to a grinding halt,” Mr Crumlin said.

The facts about Svitzer Towage:

The facts about Svitzer’s workforce

The facts about the negotiation process