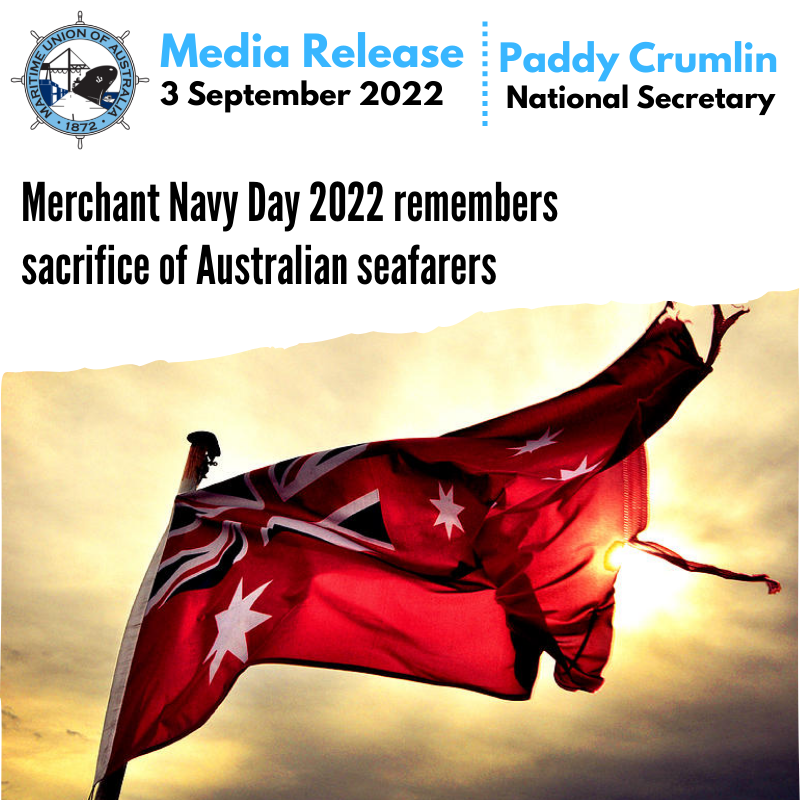 Australians are urged to pause today and remember the significant contribution Australian seafarers have made to the country’s security and economic success, and the importance of the industry to the nation’s future.

One in eight Australian merchant seafarers sacrificed their lives during World War II — a casualty rate that was higher than those suffered by any of the armed forces — in an effort to maintain supplies of goods and materials vital for the war effort.

Many Australian ships were requisitioned by the Navy while those that continued in commercial service were often the eyes and ears of our nation in the contested waters around our coastline.

Merchant Navy Day is commemorated each year to remember their sacrifice, marking the anniversary of the sinking of the first Allied merchant vessel during World War II on September 3, 1939.

Maritime Union of Australia National Secretary and International Transport Workers' Federation President Paddy Crumlin said that it was also important to remember that these sacrifices continued outside war, with merchant seafarers integral to the prosperity of our island nation.

“More than 800 Australian merchant mariners sacrificed their lives for the Allied cause during the First and Second World Wars,” Mr Crumlin said.

Mr Crumlin highlighted the COVID pandemic's impact on Australian supply chains and the importance for an island nation to retail the skills and capacity of a seafaring industry that provides self-reliance and independence from global shocks or crises.

With the Albanese Government coming to power in May 2022 with a promise to establish a strategic fleet of Australian crewed and flagged commercial vessels, Mr Crumlin said it was important to not only remember the past but to now look to the future as the government enacts new policies to revitalise Australia’s shipping industry and ensure it is able to support the nation’s economic and national security.

“Without seafarers, Australia’s economy will grind to a halt,” Mr Crumlin said.

“These are the people who transport Australia’s exports, supply the country with fuel and commodities, and ensure the overwhelming majority of everyday products are available to the consumers.

“In recent decades, the number of Australian-crewed vessels has been slashed, not only costing thousands of jobs, but leaving the country vulnerable to global conflicts or economic shocks that disrupt maritime trade.

“During past conflicts, Australian-owned vessels crewed by Australian seafarers were available to ensure our supply lines remained in place, but decades of neglect has seen the industry hollowed out.

There has never been a more important time to remember the past and make plans to protect the future by ensuring we have a viable Australian Shipping industry.