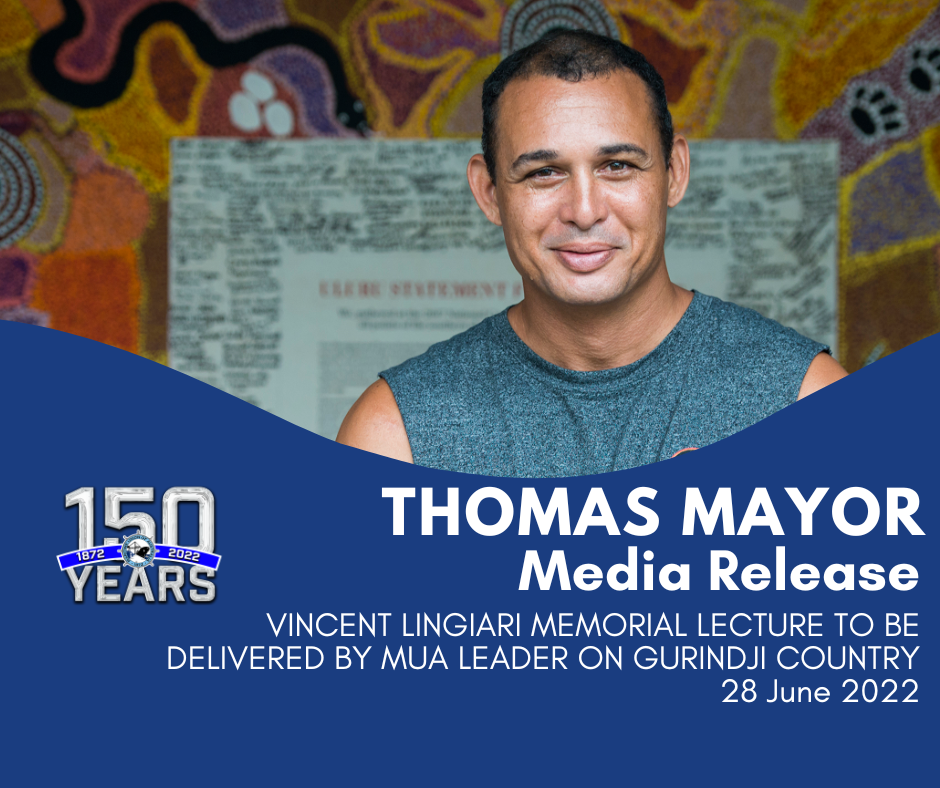 The Maritime Union of Australia is proud to announce that one of its national officials, the Union’s National Indigenous Officer Thomas Mayor, will deliver the 2022 Vincent Lingiari Memorial Lecture later in August. The annual Vincent Lingiari Memorial lecture, hosted by Charles Darwin University (CDU), commemorates the historic walk-off from Wave Hill Station in 1966 by Aboriginal station workers and their families will be delivered at the Freedom Day Festival held at Kalkarindji/Daguragu (Wave Hill) on Gurindji Country.

Thomas Mayor – as well as serving as the Union’s National Indigenous Officer – is an author and national advocate and signatory of the Uluru Statement from the Heart and has led on the national campaign for an Indigenous Voice to Parliament enshrined in the Australian Constitution.

His lecture titled ‘Walking on our land our way – The momentum towards a constitutional right to be heard’ will pay homage to Vincent Lingiari and his legacy as well as learning from the courage of the Gurindji people.

“There is no better place to deliver the Vincent Lingiari Memorial Lecture then on Gurindji country where the people sparked great progress in land rights and equality,” Mr Mayor said.

“This lecture comes at a crucial time. We now have a government that is committed to a referendum on a voice to Parliament. We can draw on the courage of Vincent Lingiari and the Gurindji people to win.”

“What greater unifying moment could there be for our country than this.”

The MUA’s national leadership team welcomed the announcement that the 2022 Vincent Lingiari Memorial Lecture would be delivered by one of its own and reiterated the union’s support for First Nations justice.

“The Maritime Union has always fought for issues of social justice and equality, so of course we have backed this up with political activism in support of the rights of First Nations peoples over the course of many years,” National Secretary Paddy Crumlin said.

“We are therefore incredibly proud of the contribution being made by Thomas Mayor on behalf of First Nations people throughout Australia and of course within our union,” Mr Crumlin said.

The Freedom Day Festival is a three-day festival held at Kalkarindji/Daguragu (Wave Hill) from August 26 to August 28. The Vincent Lingiari Memorial Lecture will be held on August 26.