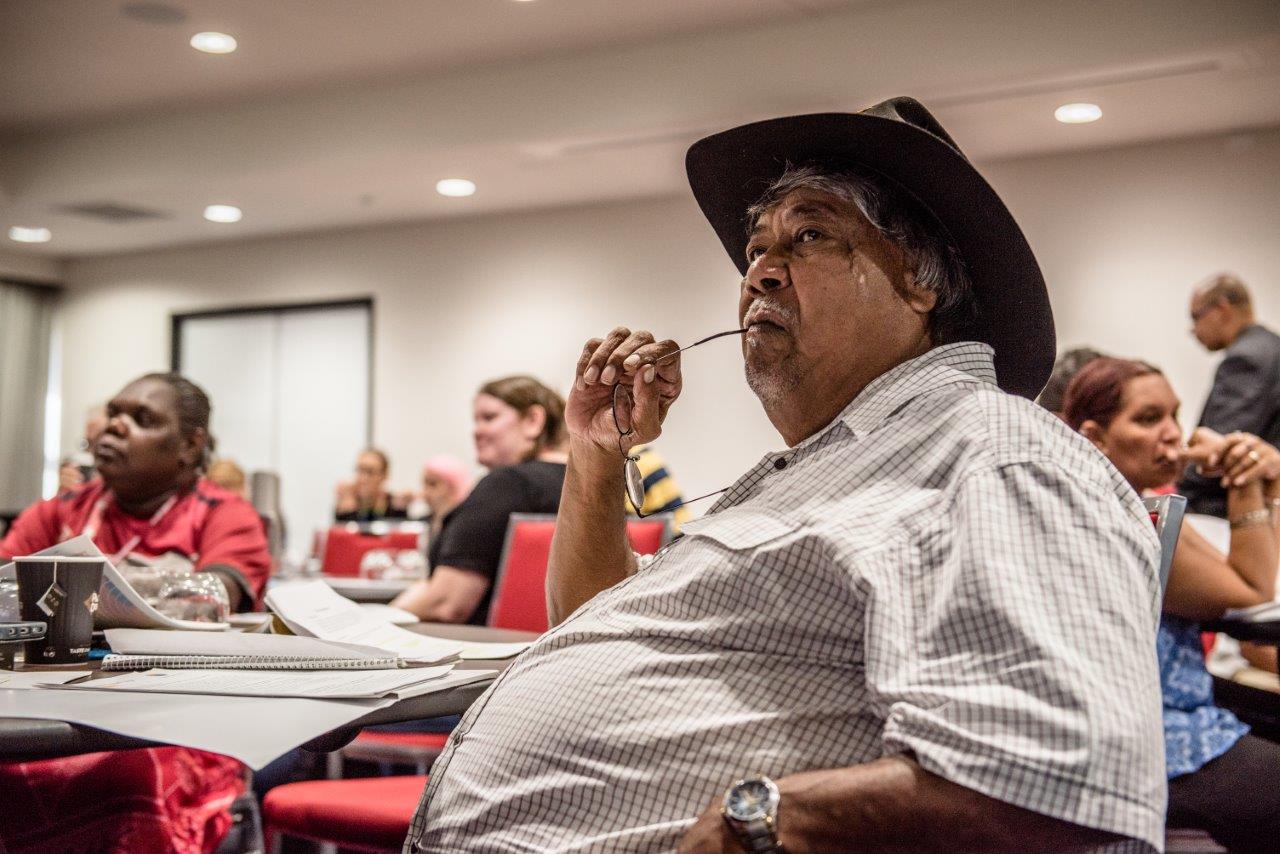 Uncle Jak at the 2017 Darwin Region Constitutional Dialogue where he nominated National Indigenous Officer Thomas Mayor to represent Darwin at the National Constitutional Convention that endorsed the Uluru Statement from the Heart.

As International President of the Construction Forestry Maritime Mining Energy Union (CFMMEU), National Secretary of the Maritime Union of Australia (MUA) and as President of the International Transport Workers Federation (ITF) with over 20 million members in aviation, road, rail, urban transport, shipping, dockworkers and maritime workers we would like to share our deepest sorrow and heartfelt condolences to Uncle Jak’s family, particularly his wife Aunty Gail, his daughter Ngaree Ah Kit and son Johnathon Ah Kit.  We would also extend those condolences Uncle Jak’s extended family, brothers and sisters, comrades and friends, Indigenous peoples and non-Indigenous peoples.

John Ah Kit was for a while a truck driver on the wharves in Darwin, he was greatly loved and respected inside the trade union movement and by the MUA in particular where he was a close friend to Branch Secretary Andy Burford, many of our members and mentor to MUA National Indigenous Officer Thomas Mayor.

After retirement Uncle Jak was well known for a drink and a punt with our members and other workers at the Pints Club.  His humour, insight, courage, leadership and charisma were legendary - a reflection of the long and important journey of his life and his life’s work.  Much will be said about that today.

From my union and members, we are proud to have stood shoulder to shoulder with him and other Indigenous leaders and peoples in the long march for justice, self-determination, recognition, freedom and respect for Indigenous peoples in this country and First Nations people’s everywhere

I was proud and honoured to have worked with Uncle Jak and many other maritime and CFMMEU members and officers did as well in that long journey.  Again, much will be said today about his leadership in the Northern Land Council, the Jawoyn Association, the battle and campaign to prevent mining at Coronation Hill, the sacred site and resting place of Bula, a creative being. His humour and personality were in the mix as to why Uncle Jak was such a skilled negotiator that translated into many achievements, such as the Native Title settlement at Mount Todd.

His restless and relentless commitment for recognition and justice for Aboriginal peoples took him also into the senior leadership in the Labor Party when he was elected as the first Aboriginal person in the Cabinet in the Northern Territory.  His work and leadership are as numerous as they are important during this period as well.

In retirement, his commitment and work was undiminished and among many other achievements he was central to the successful consensus at the Uluru National Constitutional Convention where he was appointed from the plenary to co-chair the meeting in acknowledgement of his great political abilities and his family and spiritual connections across the Northern Territory, APY Lands and broader Australia.

Again to Uncle Jak’s family and the many Australians who knew, loved and respected Uncle John (Jak) Ah Kit on behalf of all of the members, officers and staff of the organisations I represent and together with Thomas Mayor the MUA National Indigenous Officer, today as we say farewell, we respectfully join you in celebrating his life, his wisdom and great good humour along with his outstanding contribution to the rights of First Nations peoples, the Northern Territory and all Australians.

Vale Uncle John Ah Kit, First Nations leader, man of family, trade unionist, political leader and man of great wisdom, humour, leadership and courage who will remain an inspiration for others to follow in his footsteps.  Now at rest.

Sincerely and in Unity,