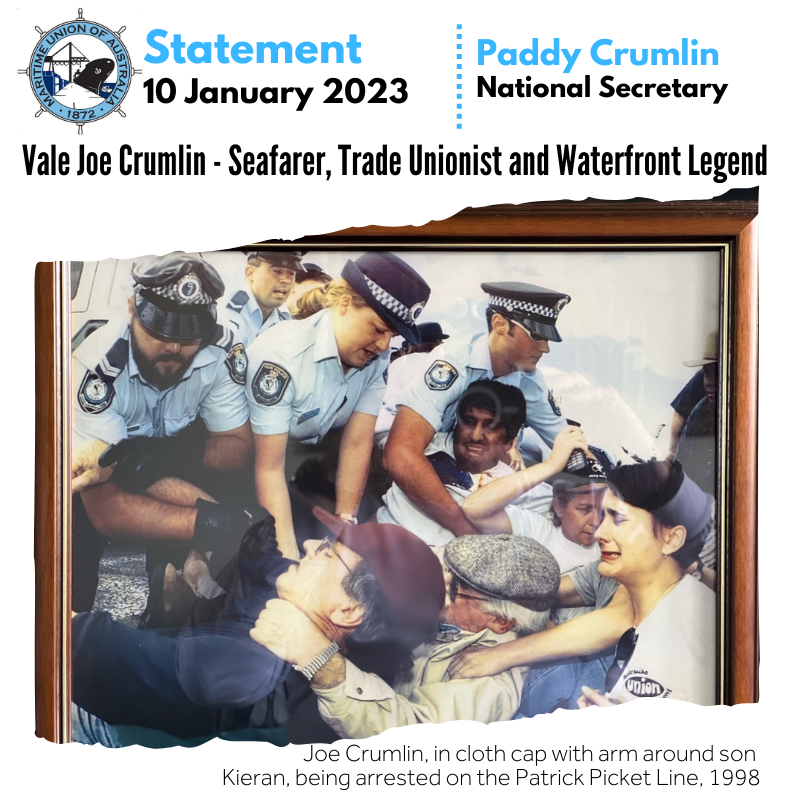 Passed away peacefully in hospital after a short illness on 9 January 2023 aged 93 years.

Following the Mass, the family will attend the burial at Mona Vale Cemetery.

In lieu of flowers, please consider a donation to Hunterlink, a service which delivers crisis intervention and wellbeing support to maritime workers and their families in Australia and internationally.

On behalf of the Crumlin family, thank you for your kind and supportive messages on the passing of my father Joe Crumlin yesterday.

Joe was a legend on the Sydney waterfront and was thrilled when the Sydney branch celebrated that with the award which he and other legends of the waterfront received a number of years ago.

A Bondi boy, sweep and life member of Bondi Surf Bathers Lifesaving club and School Captain of St Anne’s at Bondi, he went to sea just after the war as a deck boy out of Sydney and by his retirement, left the industry as a foreign going Master having put himself through his own certification at sea as an AB and subsequently as the coxswain on the famous Sydney pilot cutter the Captain Cook.

He was an officer with Adelaide Steamship company and came ashore during our school years working with Waratah tugs as a skipper. He was highly regarded as a salvage master and was involved in many outside salvage jobs over his years.

He was a close friend to many on the waterfront including our Union’s Federal Secretary Pat Geraghty and Presiding Officer John Benson who were shipmates in their years at sea and remained friends up to their passing.

He was an active delegate in the Seamen’s Union of Australia and subsequently on the Executive of the Merchant Service Guild. 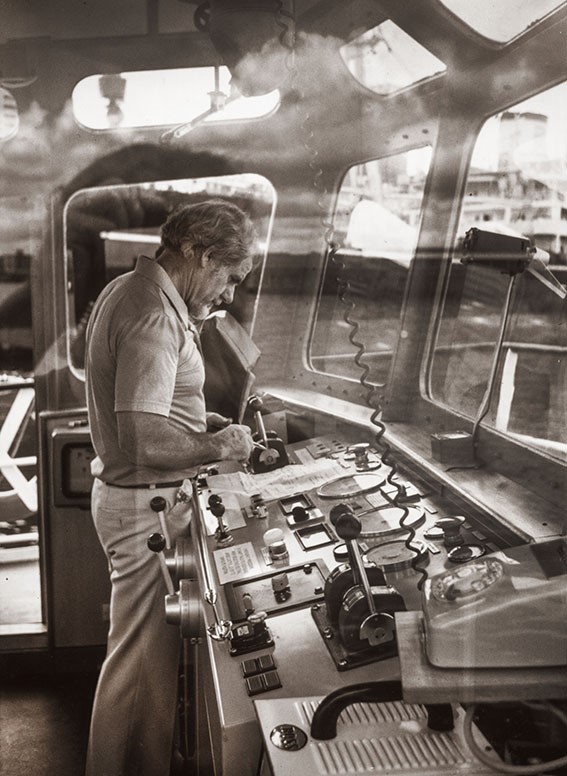 A great raconteur and historian, in later years he was a sought-after speaker on the Australian maritime industry in general and about the Australian Merchant Navy in particular.

He was also an active historian on our military history in general and the First World War, particularly concentrating on the Gallipoli campaign, an historical site he visited on numerous occasions. In that work he added much important and respected detail to the courage of the Australian effort and the politics and leadership that underpinned those sacrifices. Many Australian merchant seafarers were at Gallipoli, a high number dying including Simpson (who was a member of the Seamen’s Union) of Simpson’s Donkey fame.

He was awarded an Order of Australia medal for his historical work and was very active in the RSL movement, at one time playing a central role in military archives.

During the 1998 waterfront dispute, Joe – together with my brother Kieran and other members of our family – was arrested on the Patrick picket line in Sydney. He was a passionate, erudite, and lifelong advocate and activist for trade union rights and the rebuilding of the Australian Merchant Navy. He was very active with many of our veterans in the Merchant Navy Association and other seafaring bodies.

His sons Paddy, Kieran and Joseph and grandchildren Dan, Jed and Rory, and son-in-law Kris along with many others in our extended family have been or are members of the MUA following generations of involvement on the Sydney waterfront .

Greatly loved and respected by all who knew him, he remained active and lived independently right up to his passing after surgery last week with the support of his family including daughters Kate and  Erin and son Sean, all known to many within our industry and union and the progressive movement.

He greatly loved our mother Erin, another Bondi girl, and held her memory central to all his activities and achievements following her passing a number of years ago.

Details of his funeral and wake next week will be made available as the details are finalised. The family wishes to thank those who have sent messages of condolences both in Australia and internationally already.

Sincerely and in unity,

In lieu of flowers, the family asks that people can make a donation to Hunterlink in memory of Joe Crumlin. This will assist Hunterlink in their targeted support services for vulnerable seafarers and maritime workers throughout Australia and internationally.