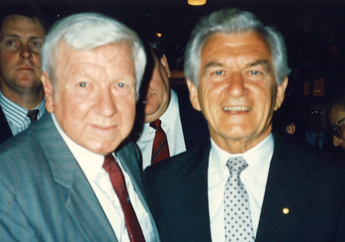 The Maritime Union of Australia wishes to record our sympathies and condolences to Bob Hawke’s family on their loss. He was a loyal respected and consistently determined friend and comrade of Australian Seafarers, Waterside Workers and Port and harbour workers.

As a trade union official he supported and, in return, was supported by Australian Maritime Workers. His rapport with the union and its leaders included Charlie Fitzgibbon, Eliot V Elliott, Norm Docker Tas Bull and Pat Geraghty. During those years, he secured a functional, productive, safe and progressive Australian waterfront and a merchant navy that was essential to Australia’s National interest. This is incremental both economically, through security and defence and the servicing of our widespread economic centres and in the premier role of our export and import industries to our national growth and development. Bob knew a sure and reliable waterfront and shipping industry was also a balancing factor to the dominance of foreign shipowner monopoly of those essential services.

He built on these trade union values as Prime Minister, helping to build these industries in the national interest through fiscal reform, labour reform and consensus building across all the shareholders in the industry

This was at the core of the so called transformative nature of his political leadership. A commitment to consensus building based on real compromise and mature and objective review. Combined with his personal charisma, great good humour, knock around humility and articulate intelligence he was an accumulation of the best of political and personal attributes of any of those that commit themselves to public life and service

He was a constant honoured guest and participant together with Blanche at every major function of our union over his long public life. In later years his and Blanche’s good humour and personal observations of the contemporary industrial, political and social development were a source of great insight sometimes, great hilarity often. These observations were always an inspiration and belief that the human condition and our mechanisms would always be improved by truth, mutual respect and honest and determined courage in the face of false misleading and distorted and dysfunctional thought and action.

The International Transport Workers Federation and our 18 million Workers worldwide have also asked me to extend their sympathies to a leader known by many throughout the world as a tireless activist for human, civil and trade union rights over his public life and into his retirement. There were numerous reflections on Bob today at the ITF Seafarers and Dockers Conference in Genoa Italy, including his long friendship with the legendary Australian trade union leader Harry Bridges who led the powerful and influential US Dockers union the ILWU for 45 years.

To Blanche in particular, and to Bob’s big family, our deepest sympathies and condolences at the passing of this great trade unionist, human rights activist, progressive intellectual, Prime Minister and for us most importantly proud worker and worker’s leader.

Vale our old comrade, a long life well invested in others in the finest traditions of leadership, a person of family, fighter for peace and justice who was indefatigable in his efforts to bring about a better world for all that reside here.

Fair winds and a following sea for your rest.