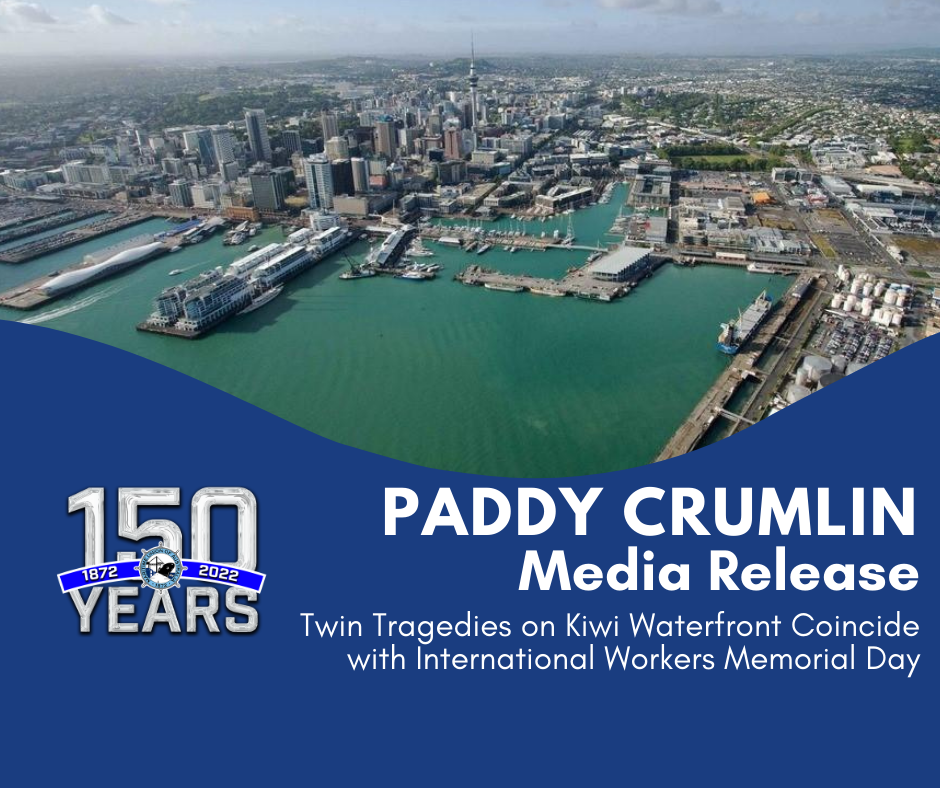 Tomorrow, on International Workers Memorial Day (April 28, 2022), transport and maritime workers in Australia and New Zealand will be in mourning for the tragic loss of two Kiwi wharfies who were killed within days of one another on the New Zealand waterfront this month.

Both deaths were avoidable tragedies that must force a renewed focus on safety at work for the many thousands of Australian and Kiwi stevedoring workers, says the Maritime Union of Australia’s Secretary and International Transport Workers Federation President Paddy Crumlin.

“It is with deep shock that we have learned that a second MUNZ member in a week has been tragically killed on the docks, this time at Lyttleton,” Mr Crumlin said.

“The MUA and ITF extend again our very deepest sympathies and condolences to the family, friends and workmates of the deceased and renew our calls for employers and government to engage seriously with the issue of safety at our ports and along the waterfront,” Mr Crumlin said.

Lyttelton Port Company has confirmed there has been a fatality aboard the vessel ETG Aquarius berthed at Cashin Quay on Monday morning. This tragic news comes just days after another young stevedoring worker was killed on the job at Port of Auckland last week while unloading the Capitaine Tasman.

“No family member should farewell a loved-one in the morning and wonder if they will see them come home at the end of that shift. Every worker must be safe on the job, and every family should be reunited at the end of the working day,” Mr Crumlin said.

The MUA and the ITF have added their voices to the calls for a government inquiry into New Zealand port safety and the preventable tragedies which have occurred in recent days on the Kiwi waterfront.

“Stevedoring employers and government must take their responsibility to the workforce seriously and enact significant changes to improve the safety standards of this critically important industry,” Mr Crumlin said.

Fatigue management is a massive issue within the New Zealand stevedoring industry, with many workers being asked to perform upwards of 60 hours of work per week. The Maritime Union of New Zealand has long been pushing for the enforcement of stevedoring standards to reduce the widespread dependence on dangerous levels of overtime at Kiwi ports. The tragedies at Lyttleton and Auckland reinforce the urgent need for legislative and regulatory reform to empower policing and enforcement activities.

“This is a tragic reminder that safety protocols and standards matter and must be taken seriously. Corner cutting is lethal, and waterfront workers will not put up with it when it’s their lives on the line, not the bosses’,” Mr Crumlin said.

The union has also underlined the dangerous nature of stevedoring work, and that the exposure of its workforce to these traumatic incidents puts them at a unique risk of mental illness and PTSD.

“The impacts of these tragedies are massive not just on the family left behind but every workmate and colleague who must return to work in the aftermath,” Mr Crumlin said.