Truss Up to His Old Tired Tricks 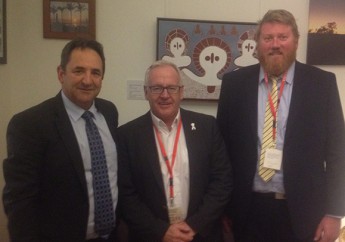 Maritime unions have descended on Canberra today to speak to members and Senators about the need to protect coastal shipping and jobs on the coast.

The agenda includes the review if the Coastal Trading Act, Offshore Visas and the Seafarers Tax Offset, which is being debated in the lower house today.

The Maritime Union of Australia (MUA) and Australian Maritime Officers Union (AMOU) are concerned by comments made in question time yesterday by Transport Minister Warren Truss, who continues to mislead the Australian people as he pursues an ideological agenda in shipping.

Mr Truss seems intent on ignoring the facts with his erroneous claims about coastal shipping.

Last week the Deputy PM delivered a speech to Shipping Australia that was littered with factual errors and as a result the MUA sought to correct the record in this statement.

Instead of conceding his mistakes, Mr Truss issued a rebuttal reiterating his flawed standpoint on Friday and stood up in the Australian Parliament yesterday to back his argument with a case study on Bell Bay, which has previously been disproven.

The fact is that Rio Tinto never paid the $29.70 rate and the voyages at this rate never took place. The $4 million loss that Truss quotes therefore also did not take place.

These voyages are all scrupulously documented in the Federal Court case, CSL Australia Pty Limited v Minister for Infrastructure and Transport.

However, the MUA is counting a small win in the fact that Minister Truss has quietly dropped his claim that 1000 fewer coastal voyages took place under permit or Temporary License by international ships after July 2012.

Deputy National Secretary Mick Doleman said the union looks forward to his department counting all the coastal voyages that took place under permit and Temporary License in 2012-13, and re-releasing the real figures.

Mr Doleman said he was more than happy to have an open discussion about coastal shipping.

“Mr Truss has said freight loads are down and this is true this is because Australia has seen a general decline in manufacturing," he said.

"To blame shipping costs for the death of manufacturing is more than farfetched, particularly with the Abbott Government's attacks on the sector.

“We don’t blame the trucking industry when retail sales slump.”

“Mr Truss has said it’s more expensive in terms of wages for Australian labour in comparison to foreign labour and this is indisputable in any industry, Australians should be proud we don’t pay people $2 an hour.

“And let’s not beat around the bush, this is what this debate is about – opening up to cheaper foreign labour.

“Here’s a fact for Mr Truss: Foreign seafarers are paid less than $2 an hour if they’re lucky to work on a ship that complies with International Labour Organization minimums.

“What’s to say that the buck will stop at coastal shipping, why not next bring in labour on third-world wages to drive our trucks, pilot our planes, and mine Australia’s minerals in response to Australian workers wanting to earn a living wage?"

"The Abbott Government needs to put ideology to one side and get on with the job of acting in the national interest and governing for all Australians.

"That's not just for shipping but offshore visas and the seafarers tax offset as well."