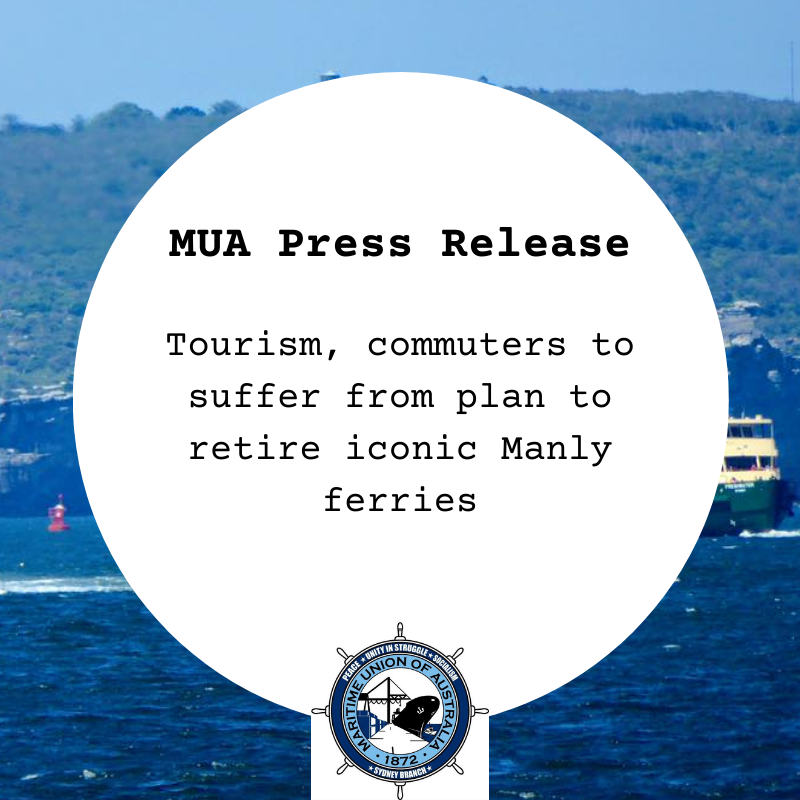 Tourist numbers on Sydney's most popular harbour route will be slashed if the NSW Government presses ahead with their plan to retire the internationally recognised doubled-ended Manly ferries from next year.

The Maritime Union of Australia said the proposal to replace the four Freshwater ferries with Emerald-class catamarans would see passenger capacity slashed from 1,100 down to 400 per trip, with the new ferries unable to operate to the same swell limit while crossing the Heads.

MUA Sydney Branch Assistant Secretary Paul Garrett said the decision was a costly mistake that would hurt tourist numbers right as the Sydney tourism market was trying to recover from the COVID crisis.

“The doubled-ended Manly ferries are an internationally recognised Australian institution, with these iconic vessels the jewel in the crown for Sydney Harbour,” Mr Garrett said.

“Families from all over Sydney love getting the Manly ferry from Circular Quay and spending a day at Manly Beach. It’s been a tradition for over 100 years.

“These vessels don’t just serve tourists both local and international, they are a vital part of the commuter network, reliably taking people from the Northern Beaches to work in the city each day.

“NSW Transport Minister Andrew Constance clearly knows his decision to call time on these iconic ferries is not supported by the local community, which was shown clearly by his attempt to sneak the news under the radar on a Friday afternoon.”

Mr Garrett said the decision wouldn’t just see the loss of an iconic tourist drawcard, it would be a costly mistake due to reduced passenger capacity and the replacement vessels being unable to operate in the same high swells.

“Particularly in school holidays and the warmer months, the replacement of Freshwater ferries that can carry 1,100 passengers with catamarans that only hold 400 will see a dramatic drop in tourist numbers in Manly,” he said.

“That situation will be made worse when big swells roll in through the heads, with the new Emerald-class vessels unable to operate to the five metre swell limit that the current Freshwater-class does.

“Despite their age, the workers who spend every day on these vessels know there is plenty of life left in these great ferries.

“Rather than see expenditure on maintenance and life-extension programs for these Freshwater ferries as a cost, the NSW Government should see it as an investment in an iconic tourist drawcard.

“This announcement is simply the wrong decision for Manly, the Northern Beaches and Sydney, but it’s not too late for what could be a costly mistake to be overturned.”