Workers employed by Hutchison Ports in Sydney and Brisbane have voted overwhelmingly to commence broad-ranging industrial action, accusing the company of launching the most severe attack on waterfront conditions in a generation.

The protected action ballot of Hutchison Ports workers from Port Botany and the Port of Brisbane, conducted by the Australian Electoral Commission, recorded 98.4 per cent support for a series of rolling work stoppages, along with a range of other actions. The first round of industrial action, involving bans and limitations, will commence on Thursday.

Negotiations over a new workplace agreement covering Hutchison Ports workers in Sydney and Brisbane reached a stalemate after the company refused to back away from plans to slash wages and conditions, along with automating some roles and outsourcing other jobs.

The Maritime Union of Australia said the company’s demands include: a 2.5 per cent cut to superannuation; reductions to sick and parental leave; cuts to redundancy and long service leave; removal of income protection; wage cuts of up to $10 per hour followed by a wage freeze; and reductions to safety standards, including the loss of full-time first-aiders and removal of personal protective equipment. 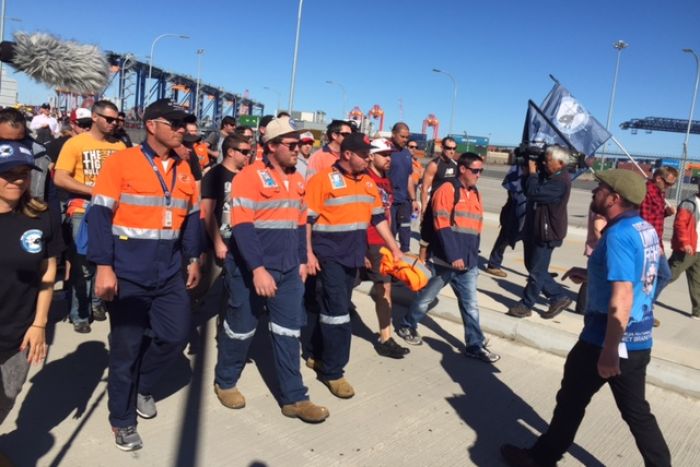 MUA Assistant National Secretary Warren Smith said the attempt by this multi-national port operator to slash the pay and conditions of Australian workers left them with no choice but to take industrial action.

“The world’s largest stevedore, the same company that sacked 97 workers by text message in 2015, is now telling its Australian workforce that it wants to slash their wages and conditions,” Mr Smith said.

“If Hutchison gets its way, waterfront workers would be left 26 per cent worse off in retirement based on the company’s planned cuts to their superannuation entitlements, while redundancy payments would be halved for the average worker, as would long service leave.

“Not content to attack wages and conditions, Hutchison Ports are going after the safety of their workers, with a push to remove the full-time first-aiders who provide potentially life-saving treatment in an emergency, along with taking away basic personal protective equipment.

“On top of that, they want to cut wages by up to $10 per hour, impose a 12 month wage freeze, with pay rises of just 1 per cent a year after that.

“Our members refuse to sit back and watch as four-decades of hard-won conditions are stripped away by a greedy multi-national whose only concern is maximising its own profits.

“We will not accept an agreement that rips us off and reduces our standard of living, and the MUA is committed to using every industrial and legal tool at our disposal in our fight to protect conditions and safety standards on the waterfront.

“The actions Hutchison Ports highlight exactly why the Australian union movement has launched the Change the Rules campaign, to challenge the actions of big corporations who are increasingly using the broken workplace laws to attack the conditions of working people.”