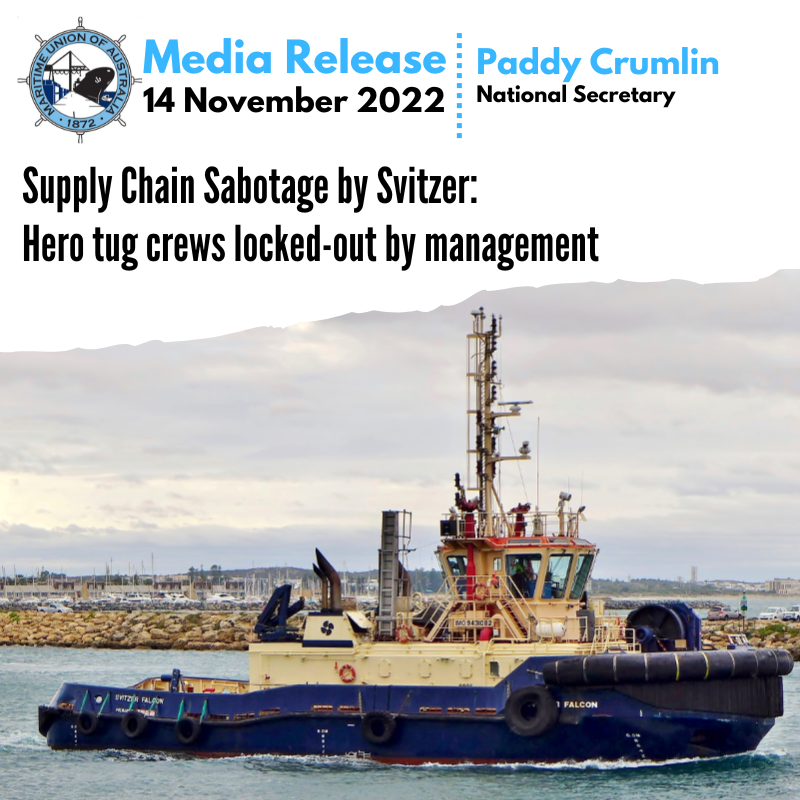 In a massive escalation of the simmering industrial conflict being waged by Svitzer Towage’s Australian management against local tugboat crew, the company has given notice that it will lock-out its entire national seagoing workforce on Friday 18 November, effectively destroying its capacity to deliver towage services and throwing Australian supply chains into disarray.

Svitzer receives taxpayer funding from the federal government and provides essential towage services at every mainland port in Australia and is a wholly owned subsidiary of the global shipping conglomerate AP Moller Maersk, headquartered in Copenhagen.

As an arm of this multi-billion-dollar behemoth, Svitzer Australia funnels hundreds of millions of dollars back to Denmark and pays almost no tax in Australia.

The Australian management team has spent the past three years refusing to finalise a new Employment Agreement to cover tugboat crews at seventeen ports around the country, effectively giving these workers a wage-freeze amidst soaring inflation and massive corporate profits during a COVID-boom for shipping and logistics companies. At every turn, the three maritime unions have sought to drag the management team back to the negotiating table and work on a mutually agreeable outcome.

The National Secretary of the Maritime Union of Australia, Paddy Crumlin, who is also the President of the International Transport Workers Federation (ITF), said that “Svitzer’s workers have continued to turn up, work hard and contribute not only to the massive profitability of this successful company but save lives and protect Australia’s coastline during daring rescues of stricken cargo ships.”

Svitzer receives public funding to be the on-call emergency towage provider for the Australian Maritime Safety Authority (AMSA) and specialist crews from the Port of Newcastle often sail into the night to respond to crises in Australian waters. Crews aboard Svitzer Glenrock and Bullara joined the daring rescue of the stricken Portland Bay cargo ship in July this year. A Svitzer Glenrock crew were recently despatched to the South Coast to recover another broken down cargo ship, the Rio Madeira – a ship owned and operated by Svitzer’s own parent company, AP Moller Maersk.

After almost three years reaping massive dividends from the supply chain pressures of COVID19, Svitzer has amassed a corporate war chest to fund a damaging and disruptive lock-out that will now bring Australia’s ports to a grinding halt.

Svitzer’s Danish parent company is on track to deliver more than $30 billion in profit to its shareholders this year after achieving a record profit last year of more than $21 billion.

For many years Svitzer has enjoyed near monopoly status as the only major towage provider in Australia’s biggest ports. Locking out their workers will wreck Australia’s productivity, prevent consumer goods, and bulk commodities being loaded or discharged at major ports like Botany, Kembla, Melbourne, Newcastle and Brisbane and every Australian business and consumer will now suffer from this delinquent company’s selfish and pigheaded conduct.

The last employer to unilaterally lock out its workforce was Qantas when it grounded its fleet in a dispute with its pilots over ten years ago.

"The actions of Svitzer today replicate Qantas' actions but in fact go far further in the damage to ports and port users, and the flow on effects that will have on Australian businesses, consumers and our global reputation is extraordinary," Mr Crumlin said.

Workers at Svitzer are represented by three maritime unions, depending on the work performed; the Maritime Union of Australia (MUA), the Australian Institute of Marine Power Engineers (AIMPE) and the Australian Maritime Officers Union (AMOU). The three unions have been working together to negotiate for a fair outcome that will deliver fair pay, safety at work and job security for these skilled and experienced seafarers, however the company has doggedly refused to negotiate in good faith.

“Svitzer representatives have repeatedly turned up to negotiations with sudden and unreasonable demands which they know will derail the negotiation process and undermine the prospect of a mutually agreeable outcome,” Assistant Secretary of the MUA, Jamie Newlyn said..

“In September 2020, on the cusp of agreement they dropped a fresh log of claims running to 30 new demands that the union had been given no prior warning of. This was done with the obvious intention of preventing any further progress and delaying an outcome while they pursued legal action against the workforce in the Fair Work Commission,” Mr Newlyn said.

Svitzer applied to the Commission in January 2022 to terminate the lapsed Employment Agreement and throw the workforce back on to the basic Award. This would result in pay cuts of up to 47%, the casualisation of permanent roles and the undermining of important safety standards that have been hard-won by workers over many years of negotiation.

Transport unions from around the globe are presently meeting in Zagreb, Croatia, where affiliates will now examine the conduct of the Maersk towage subsidiary at a series of high-level meetings of shipping and dock workers.

"At Maersk's AGM earlier this year our members and affiliates laid out the unconscionable conduct of Svitzer Australia to the company's shareholders. Global unions have made the case that the actions of Svitzer Australia are in direct breach of ILO principles of collective bargaining and undermine AP Moller Maersk's stated corporate values," Mr Crumlin said.

"ITF affliates around the world have expressed their support for Australian towage workers and extend their support to Svitzer towage employees in their ongoing dispute with a management team that are determined to put the company on a course which inflicts self-harm on their own corporate interests but also undermines the efficient, productive throughput of cargo through Australian seaports and imperils the international relationship between AP Moller Maersk and its workers worldwide," Mr Crumlin added.