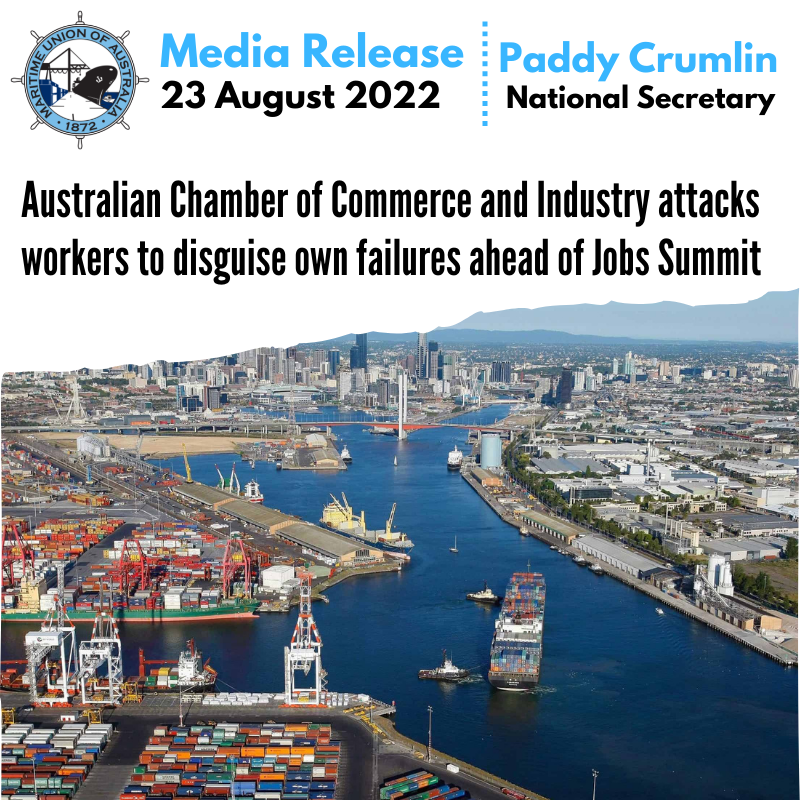 Once again, workers are under a sustained political attack, with their rights, pay and conditions in the crosshairs of big business in an opportunistic and dishonest misrepresentation ahead of the Federal Government’s national Jobs Summit.

The Australian Chamber of Commerce and Industry is entitled to its own log of claims as the Albanese Labor Government readies the Jobs Summit, but these demands should be acknowledged for being little more than a self-serving and opportunistic gambit ahead of a long-overdue reform process that will seek to correct more than 9 years of economic mismanagement by the former Liberal Government.

The truth is, the Chamber of Commerce and Industry – and the vested interests it represents – has had a very good time of it under the Liberals and Nationals in Canberra, but they should not mistake the deliberate entrenchment of wage-injustice for good governance, even if it is profitable for them!

Many of the complaints lodged by the Chamber at their National Press Club address arise from a chronic lack of investment in infrastructure, long-term mismanagement by private monopolies protected by conservative state governments, and our growing dependence on international shipping cartels that throughout COVID have manipulated freight capacity and timetabling to extract maximum profit at the expense of Australian businesses and consumers.

Moreover, the rankings they draw on are old, and have been discredited by Deakin University who put to a Productivity Commission inquiry that “World Bank Logistics Performance Index have sample and methodological issues that limit their use or do not factor in the characteristics of the Australian market.”

This ranking system is so lopsided it ranks small ports like Port Moresby, Bell Bay and Noumea higher than Australia’s capital city ports, and puts ‘respectable’ ports like Southampton, Felixstowe and Valencia near the bottom. Australian ports sit at the middle of the ranking, which partly reflects their role as gateway rather than transshipment ports.

Clearly the Chamber is more interested in mindlessly attacking the workforce, and their unions, than taking the opportunity to call for investment in freight rail or intermodal infrastructure that will decongest our ports. They are plainly more concerned about the collective effort of workers to demand a fair pay increase amidst shocking inflation, stagnant wages and soaring company profits, than they are concerned about small businesses and consumers being ripped off by international shipping cartels and local terminal operators engaged in some of the most brazen price-gouging and profiteering ever seen.

As of June 2022, only 40% of vessels are arriving on time. This is a slight improvement, but is half the pre-pandemic average, and demonstrates the extent to which international shipping cartels continue to manufacture scarcity in the supply chain to drive profits.

To this end, the Chamber of Commerce & Industry should take heart that the newly elected Albanese Labor Government has promised to revitalise Australian shipping, wean our economy off the global shipping cartels that have ripped us off for so long and are committed to an infrastructure investment plan that allocates federal funding on the basis of need rather than pork-barrelling based on backbenchers’ perceived electoral advantage.

But in fronting the National Press Club this week and attacking the union movement, the Chamber has revealed their hand too early and with too much enthusiasm to now be taken seriously when they attend the Jobs Summit later next month.

The company then decides based on merit. Workers don’t get to choose. The reason this was proposed and agreed to by the company was to get more women and more people from diverse backgrounds such as First Nations people into the workforce and this is what has happened. It was to address the lack of diversity in the workforce and is a way of working together cooperatively to achieve it.
Hutchinson Port is now the biggest employer of women in the stevedoring industry and approximately 8% of their workforce identifies as a person from Australia’s First Nations communities, well above the 3.2% of the overall Australian population.
Meanwhile, at a time when the rest of Australian society is grappling with the economic injustices working people are increasingly subject to, from wage theft through to industrial manslaughter, the tin-eared representatives of big capital still can’t hear anything over the din of their own self-interest.

They risk missing altogether the opportunity to work constructively or effectively through the Jobs Summit process by indicating at this premature stage that they remain preoccupied by old, irrelevant and debunked crusades against unions and the workers who join them.

How can they be taken seriously at the Jobs Summit when they have resisted a $1 increase to the minimum wage and have refused to acknowledge the growing disparity between company profits and workers’ share of those profits – through their wages? Likewise, how can their complaints about unions be taken seriously when, to date, it has been the corporate and managerial militancy of employers such as Svitzer, Qantas, Tuftmaster and the NSW State Government – that has prompted some of the most significant industrial disputation in recent memory?

The Jobs Summit has a number of significant challenges before it. Wage justice and reform of the Fair Work Act to restore workers’ rights to collective bargaining are two issues on which the union movement has indicated it is determined to achieve overdue change. The real question is whether big business’s representatives will join the process and participate in a mature dialogue or continue a lengthy tantrum about the outcome of the May election.