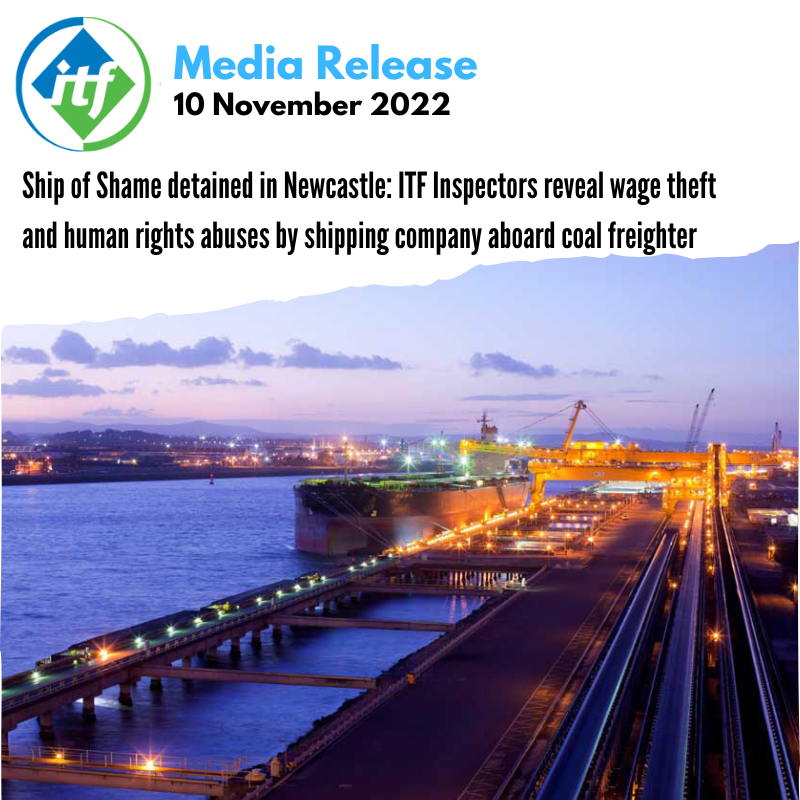 The International Transport Workers Federation (ITF) inspectorate has discovered a shocking case of wage theft and human rights abuse aboard a coal ship berthed in Newcastle port, with crew members denied their legal right to shore-leave and robbed of $75,000 in wages owed to them over three months. As a consequence of the ITF inspectorate’s findings, the Australian Maritime Safety Authority (AMSA) has detained the ship in Newcastle until these breaches are rectified.

While the $75,000 of unpaid, stolen wages are made up of a 20 per cent shortfall to about 21 crew through August, September and October, the ship is also in breach of maritime labour conventions which compel shipowners to permit shore leave and facilitate crew changeover.

ITF inspector Dan Crumlin, who boarded the Costanza and spoke to the crew, explained that COVID-era restrictions that had stopped seafarers going ashore in many countries during the pandemic had been lifted in Australia almost three months ago.

"There are people on that vessel who we understand have not been off the ship in about ten and a half months," Mr Crumlin said.

"We took our findings to AMSA as is the procedure and they have upheld our view and detained the Costanza until those wages are paid and we're looking into why the crew of the Costanza believed - or were told - that shore leave was still banned in Newcastle, when that’s simply not the case,” he added.

This shocking case of abuse aboard an internationally flagged ship in Australian waters has come to light only weeks after the ITF and the Australia Institute released a joint report into the endemic wage theft that is rampant within international shipping, especially along the Australian coast.

"The ITF has just put out the Robbed At Sea report, which looks at the endemic theft of wages from seafarers in Australian waters,” Mr Bray explained.

"Sadly, 30 years after Peter Morris, in Newcastle, initiated the Ships of Shame report, the evidence is that things are just as bad as they were back then,” Mr Bray added.

Robbed At Sea showed wage theft on visiting ships to Australia averaged $65 million a year for the past 10 years.

Mr Bray outlined how a small team of just five Australian inspectors was already on track to recover $US7 million ($10 million) from about 550 inspections this year, or just under a tenth of the vessels visiting Australian ports.

The Costanza will remain detained at Newcastle Port until the crew members have received their stolen wages and are relieved by a replacement crew for the onward journey to the Japanese port of Hitachinaka.