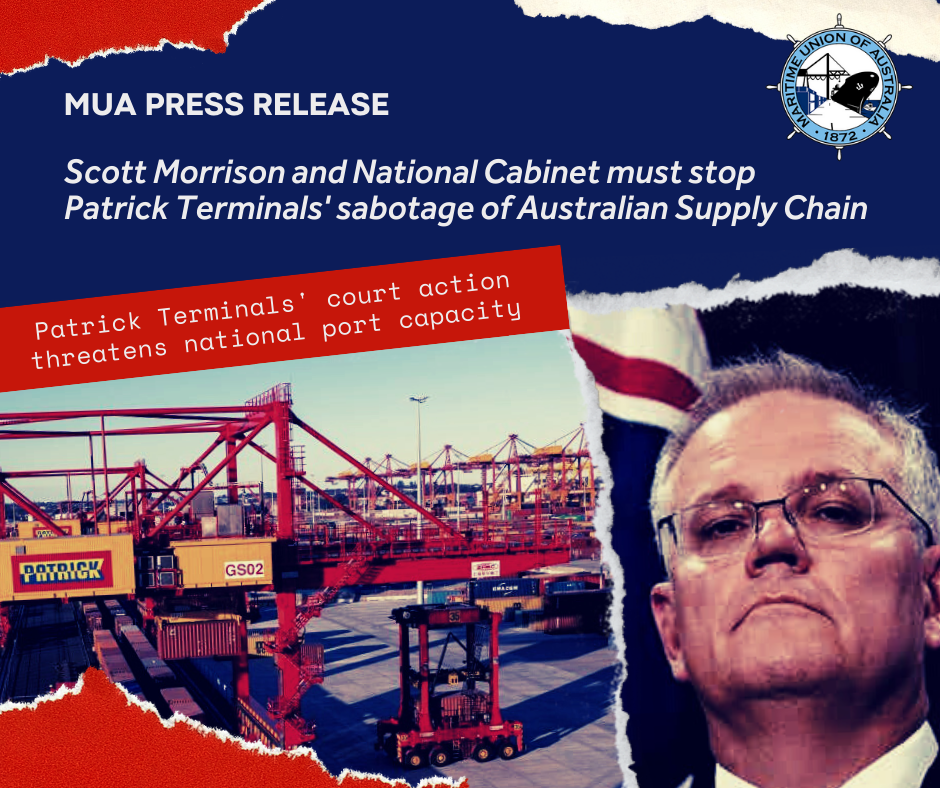 With Patrick Stevedores pushing ahead with planned court action next Monday to abolish its Enterprise Agreement with 1000 stevedoring workers around Australia, the Maritime Union of Australia is calling on the National Cabinet, which meets today, to take steps to protect Australia’s fragile supply chains at this critical moment.
“Amidst the ongoing COVID pandemic and the greatest supply chain crunch Australia has ever seen, Patrick Terminals is willing to throw a spanner in the works of Australian port operations by cancelling their entire workforce’s Employment Agreement and forcing an unprecedented return to the basic Award,” said MUA National Secretary, Paddy Crumlin.
The cancellation of the Enterprise Agreement would have a catastrophic impact on shifts, productivity and put an end to 24 hour operations at Patrick’s Sydney, Brisbane, Melbourne and Perth terminals.
“We are calling on Scott Morrison and the National Cabinet to ensure that the company does not move ahead with this court action and for Patrick Terminals to return to the negotiating table to bargain in good faith,” Mr Crumlin said.
The current Enterprise Agreement which Patrick Terminals seeks to terminate provides penalty rates, shift allowances and overtime provisions to enable 24-hour, 7 day operations at container terminals around the country, to ensure Australian imports and exports keep moving at all hours of the day or night.
The basic Award would force workers and the stevedoring company to observe traditional 35-hour work weeks during ordinary business hours.
“The MUA has concluded Enterprise Agreements with the entire stevedoring industry apart from Patrick Terminals. The Union is not seeking anything more from Patricks than has already been agreed to by other stevedoring companies,” said Assistant Secretary of the MUA, Jamie Newlyn.
“If Patrick Terminals are successful in their application to abolish the existing Enterprise Bargaining Agreement, they will cut their own operational capacity by 80% at a time when the workforce is already impacted by COVID-19 isolation requirements and severe global supply chain bottlenecks,” Mr Crumlin said.
“In pursuit of their own self-interest, Patrick Terminals’ management seem willing to put Australia’s domestic supply chains under massive, cumulative pressure at the worst possible time,” he added.
“The MUA is seeking nothing more than job security around hours of work and rosters, guaranteed pathways to permanent jobs and the same wage outcomes as other Australian stevedoring workforces, consistent with the rest of the industry. This provides for stability within the workforce and guaranteed productivity,” Mr Newlyn said.
The Prime Minister needs to take decisive action today to ensure Australia’s seaports keep moving and stevedores can keep working. Mr Morrison must ensure that Patrick Terminals’s management understand now is not the time for aggressive brinksmanship in the Fair Work Commission.