Safety Regulation in the Offshore Lagging in Australia 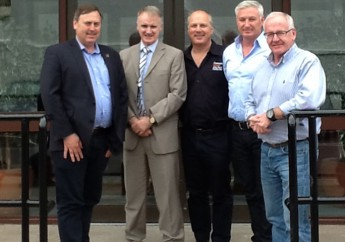 In response to serious safety deficiencies identified in the offshore sector, the MUA, under the leadership of the ACTU, has visited Norway and the United Kingdom to garner a better understanding of how each country delivers safe working environments for offshore workers.

ACTU Assistant Secretary Michael Borowick has been heading a campaign with five offshore unions - the MUA, AWU, AMOU, ETU and AMWU - for more than two years in an effort to find solutions to deliver better safety for workers in all sections of the offshore industry.

Deputy National Secretary, Mick Doleman, has been leading the MUA's charge and joined the delegation that travelled to Aberdeen, Scotland and Oslo, Norway.

"The campaign has included an exchange of high quality information between the involved unions on Occupational Health and Safety issues; in particular, what we believe is the failing of the regulatory authority NOPSEMA (National Offshore Petroleum Safety and Environmental Management Authority) and the confusion between jurisdictions covered by NOPSEMA and AMSA (Australian Maritime Safety Authority)," Doleman said.

After a number of meetings in Perth and Melbourne it was identified, he said, that the current safety regulators fall short of expectations.

"The overriding concerns include a weak inspection regime, little or no engagement of the workforce in the development of safety cases and no serious engagement of independent worker elected health and safety reps and where there are, little or no protection from the influence of the employer," he said.

While in the UK and Norway the delegation met with offshore unions and Government regulators and a report with the findings is being compiled.

"What I can say is the tripartite approach (between the unions, the government and business) in Europe is far more advanced, even under the conservative Cameron Government, than anything we have in Australia," Doleman said.

The fact finding missions coincided with the Offshore Task Group (OFTG) meetings in London, of which Mick Doleman, is the deputy chair.

The ACTU delegation also attended the discussion at the OFTG on OH&S matters.

Of particular interest was a large campaign that UNITE (UK union with 1.4 million members) are running called Back Home Safe on offshore helicopter deaths after following five crashes since in five years, resulting in 20 fatalities.

This OFTG meeting also committed to work with IndustriALL, the ITF equivalent covering construction and oil workers on fixed and floating platforms.

Depending on what is uncovered in the report a significant offshore delegates conference, to develop an effective campaign around the issue of OH&S, is being seriously considered.

While in Aberdeen the delegation endeavoured to meet with Deborah Glennie, sister of Barry Denholm, 60, who was killed on the drill floor of the Stena Clyde.

"Almost two years down the track Barry's family are still no clearer on the cause of his and his comrade, Petter Medden's, death," Doleman said.

"Deborah was greatly appreciative of the information the Australian unions were able to pass on."