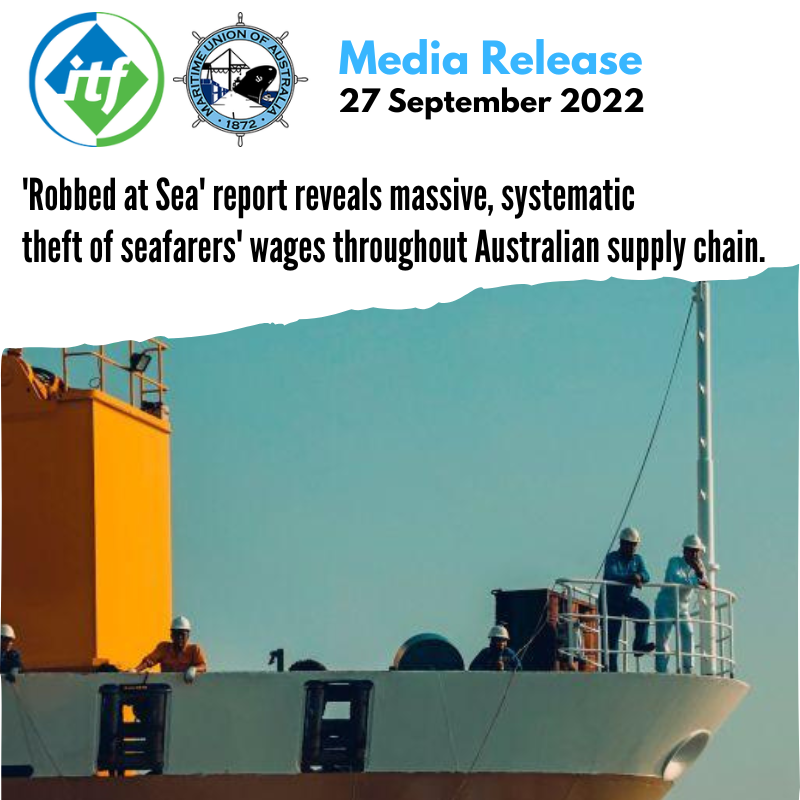 The revelations are contained in a report by The Australia Institute’s Centre for Future Work, Robbed at Sea, which examines ten years’ data gleaned from the International Transport Workers’ Federation’s (ITF) Australian Inspectorate, which conducted almost 5,000 inspections in Australian ports between 2012 and 2022.

The ITF found that 70% of ships carrying the imports and exports on which the economy depends fail to meet minimum international standards for wage payment – with resulting recovery orders totalling $38 million over that time.

“International shipping companies make eye watering profits off the back of exploiting, invisible and often vulnerable workers aboard ships registered under Flag of Convenience arrangements who fail to enforce minimum labour standards,” said Paddy Crumlin, the National Secretary of the Maritime Union of Australia (MUA) and the President of the ITF.

Seafarers on Flag of Convenience-registered vessels usually come from low-wage developing countries with limited power to resist exploitation by unethical ship owners, contractors, and sub-contractors. Strong rules in port countries (like Australia) are necessary to protect these vulnerable workers.

However, The Australia Institute report identifies several loopholes and enforcement failures that allow shipowners to routinely exploit these seafarers, even when delivering cargo from one Australian port to another.

The ITF’s Australian Coordinator, Ian Bray, said that the recoveries and revelations captured by the Robbed at Sea are just the tip of the iceberg.

“Ripping off workers’ wages is usually indicative of broader issues and greater abuses. If a boss is willing to systematically steal their crews’ wages, you can be sure there are other rorts going on,” Mr Bray said.

“Endemic wage theft within the international shipping sector is a massive problem, but there is clearly a disconnect between the various regulatory agencies like Australian Maritime Safety Authority, the Fair Work Ombudsman and various port authorities when it comes to the enforcement of maritime labour standards. We hope these will be quickly addressed so that these abuses are identified, interrupted and prevented,” Mr Bray added.

Bray said that the issues identified in the report need to be tackled in a coordinated manner by Federal Government agencies that have the authority and responsibility to enforce breaches of labour laws.

With over 90% of Australian imports and exports travelling by sea, no aspect of the Australian economy is untouched by the international shipping sector.

“The exploitation and mistreatment of these workers by international shipping companies should be of serious concern to every Australian business and consumer,” Mr Crumlin said. “The systematic theft of seafarers’ wages and the mistreatment of a vulnerable, invisible workforce is a disgrace to our stated values of fairness and decency at work.”

The Robbed at Sea report makes ten specific recommendations for reducing the incidence of wage theft from international seafarers in Australian waters. These include closing a current legal loophole that allows foreign-registered ships to conduct two trips between Australian ports without needing to respect the Fair Work Act or the Seagoing Industry Award, as well as strengthening inspection resources for the Australian Maritime Safety Authority and the Fair Work Ombudsman to ensure that existing rules are better respected.

Against this backdrop, the new Federal Labor Government’s commitment to establish a strategic fleet of Australian-flagged and Australian-crewed vessels will logically improve the standards for all seafarers visiting Australian ports.

“The systematic misconduct and abuse by these companies demonstrates how urgent the need for intervention has become,” Mr Crumlin said. “The ITF has been policing and enforcing the maritime labour standards of this country against a backdrop of intransigence and disinterest from the former Liberal Government, as well as disinformation and obfuscation by industry PR representatives such as Shipping Australia Limited.”

This week Shipping Australia Limited, which represents international ship owners operating in Australia, continued its criticism of a revitalised Australian shipping sector, revealing that their true interest lies in smothering abuses within the industry rather than coordinating with government and unions to raise standards.

“Instead of peddling fake news to protect what they view as their commercial interest, industry must do more to stamp out wage theft. The recent commentary from the so-called Shipping Australia Limited lobby group against the government’s proposal for a strategic fleet is just another petulant and defiant act of opposition to the lifting of standards for seafarers which this report highlights in starkest of terms,” Mr Crumlin said.