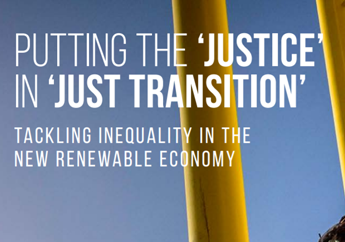 The Victorian and Commonwealth Governments are being urged to back the emerging offshore wind sector in a move that could drastically reduce carbon emissions while providing quality jobs for workers who are already being impacted by the transition out of fossil fuel industries.
In a joint report launched by the Victorian Trades Hall Council this morning, unions from the maritime, energy and manufacturing sectors have outlined a series of steps to not only encourage the use of offshore wind to reduce carbon emissions, but take advantage of the emerging industry to diversify the job opportunities for workers and communities which are currently reliant on coal, oil and gas.
Putting the ‘Justice’ in ‘Just Transition’: Tackling inequality in the new renewable economy focuses on the Star of the South project, Australia’s first proposed offshore wind farm which would use 250 turbines between 10 and 25kms off the Gippsland coast to generate up to 20 per cent of Victoria’s electricity.
The report, produced by the Maritime Union of Australia, Victorian Trades Hall Council, Gippsland Trades and Labour Council, Electrical Trades Union, and Australian Manufacturing Workers' Union, outlines the steps required to not only support the development of this emerging sector, but to ensure it delivers positive outcomes to communities reliant on fossil fuel industries.
The report recommends:

Victorian Trades Hall Council secretary Luke Hilakari said addressing climate change must be a priority and political leadership is required to ensure workers and communities currently reliant on fossil fuels weren’t thrown on the scrap heap.
“This transition must be managed in a way that ensures workers and their communities are put front and centre, with clear plans to support workers into new, quality jobs in the manufacturing, construction, and maintenance of renewable energy infrastructure, when companies make decisions to close businesses,” Mr Hilakari said.
MUA deputy national secretary Will Tracey said Australia already had highly skilled seafarers and offshore oil and gas workers, capable of constructing offshore wind projects
“Political inaction has seen the decline of Australia’s shipping industry, while the growing shift away from fossil fuels threatens the jobs of skilled workers in the offshore oil and gas sectors,” Mr Tracey said.
“The development of an offshore wind industry gives us the opportunity to transition those highly-skilled workers into the important work of delivering Australia’s clean energy future.”
AMWU Victorian secretary Tony Mavromatis said the implementation of appropriate planning and procurement policies could provide a boon for local manufacturing.
“A renewables sector that relies on bringing in equipment from overseas provides limited economic benefits, but if governments put in place requirements for the use of local content we would see a massive boost in local manufacturing jobs,” Mr Mavromatis.
“By not only fostering the development of offshore wind farms, but actively ensuring these towers and turbines are produced locally, the environmental benefits would be matched by economic and social outcomes.”
Gippsland Trades and Labour Council secretary Steve Dodd said the poorly managed power privatisation and the abrupt closure of the Hazelwood power station and coal mine had a devastating impact on the community.
“The closures in the Latrobe Valley are examples of how not to manage a transition, and we need to learn from those mistakes,” Mr Dodd said.
“But the Gippsland Trades and Labour Council, with the support of the Latrobe Valley Authority and the Victorian Government, has been able to train 2,000 workers and help most into new jobs.
“We need to continue this work with the Star of the South project, and show working people that it is possible to undertake major industry reform that puts workers and their communities at its heart by ensuring future low emissions jobs are good union jobs.”
Click here to read the report
Read more about the MUA’s work on offshore wind, a just transition and the climate crisis here: https://www.mua.org.au/campaigns/Build-Offshore-Wind-and-A-Just-Transition
Sign a petition to support the campaign.