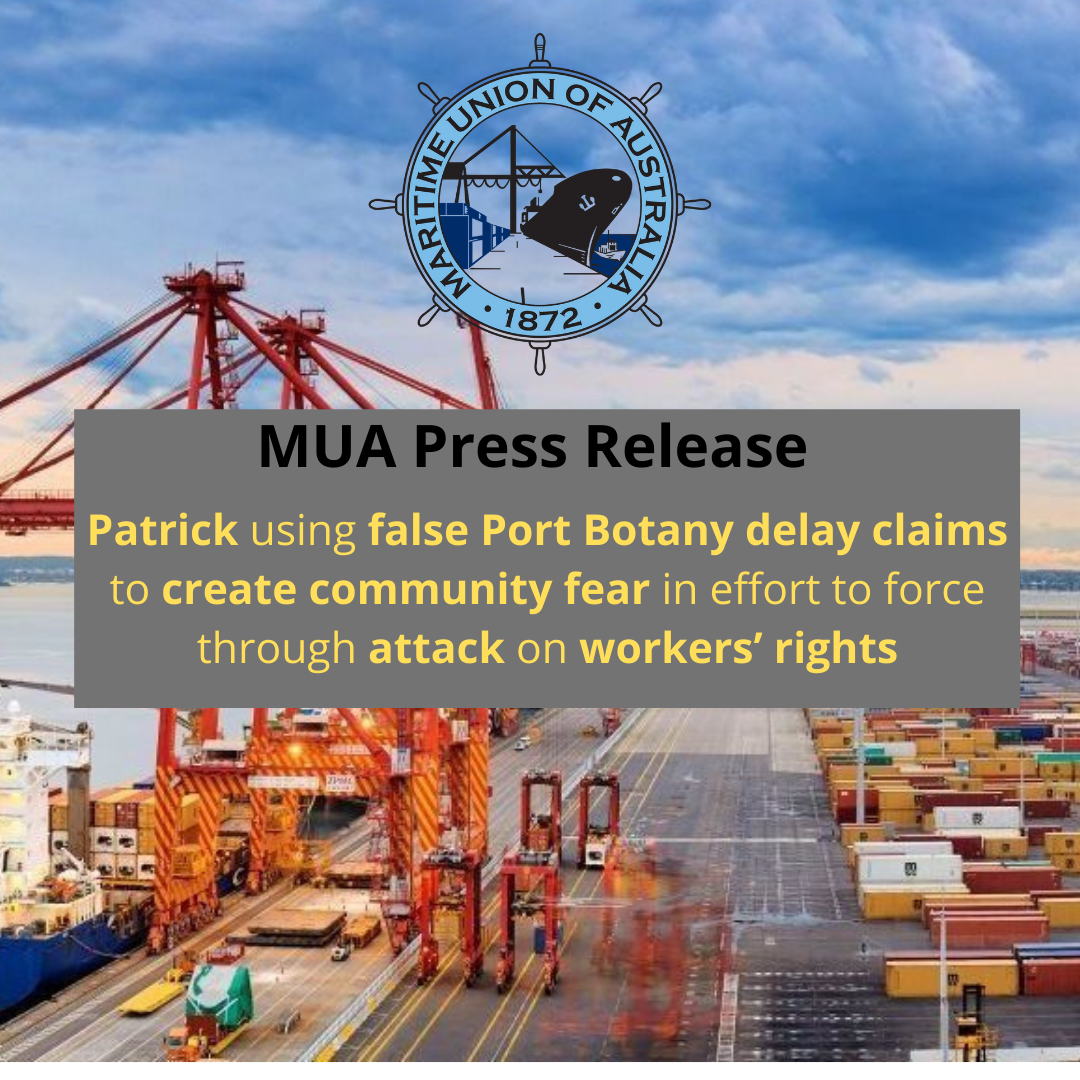 False claims that limited, legally-protected industrial action at Patrick’s Port Botany container terminal is causing major shipping delays, including to medical supplies, are nothing more than an attempt to use community fear to force through attacks on workplace rights, according to the Maritime Union of Australia.

The union said that claims that 40 container ships were sitting off the NSW coast waiting to unload was an outright lie, with vessels due to berth at Patrick’s terminal in the coming days all still travelling towards Sydney. The Patrick terminal is currently unloading several vessels, with more due to arrive this week.

The only industrial action that has occurred at the Patrick container terminal in Port Botany has been a single 4 hour-stoppage about four weeks ago, along with bans on working excessive hours.

In recent days, Patrick management cancelled three consecutive night shifts — on Friday, Saturday and Sunday nights — preventing any containers from being unloaded or transported from the terminal. Patrick also closed the terminal for eight hours at the start of the month to undertake civil construction works.

This morning, wharfies asked Patrick management to identify any containers carrying medical supplies, either on the dock or on berthed vessels, so they could be prioritised. Supervisors were unable to identify a single medical container in need of transport.

The MUA wrote to Patrick at the start of the September seeking to arrange measures to ensure medical supplies were not impacted by industrial action. That approach was rejected by Patrick.

The MUA last week wrote to Patrick offering to suspend all industrial action at Patrick terminals for a month, if the company withdrew attempts to strip away existing workplace conditions and resume meaningful negotiations. That offer was also rejected.

In June, the MUA offered Patrick a 12 month rollover of the current workplace agreement with a 2.5 per cent wage increase, allowing the company to get through COVID crisis. The company rejected that offer, instead proposing a new agreement that would strip away 50 pages of conditions covering things like family-friendly rosters, salaries and other workplace conditions.

MUA National Secretary Paddy Crumlin accused Patrick management of deliberately escalating the dispute in an attempt to use political and public concerns to drive through cuts to workplace conditions.

“This dispute has been manufactured by Patrick, with management rejecting all attempts by the union to resolve the issue and remove the need for industrial action,” Mr Crumlin said.

“The company rejected the union’s offer to roll over the existing workplace agreement, they rejected our offer to suspend all industrial action, and they rejected our attempts to put procedures in place that would ensure no impacts on vital goods like medical supplies.

“Patrick has also deliberately misled the media and public with false claims about massive delays and ships being unable to unload in an attempt to use community pressure to drive through attacks on workplace rights.

“In recent days, Patrick management has cancelled three consecutive night shifts, preventing vessels from being unloaded or containers from leaving the port. Any delays at the terminal are the direct result of these management actions, not the legal and limited industrial action.

“The company has also stood down 32 workers at the port in an attempt to escalate conflict at the Port Botany terminal.

“The Australian public are falling victim to deliberate provocation by a multinational corporation willing to go to any length to slash the workplace rights and conditions of their workforce.”

Mr Crumlin said the company’s application to the Fair Work Commission to halt protected industrial action would expose the fact that delays have overwhelmingly been the result of management, rather than union actions
.
“Patrick has been making extraordinary and unfounded claims, which will be exposed for what they are by this legal action,” he said.

“The fact is, the company has been responsible for the overwhelming majority of disruptions and delays at the terminal, through terminal closures and shift cancellations.

“There is absolutely no way the limited, legal forms of industrial action undertaken by wharfies are capable of causing the massive delays claimed by the company without any evidence.

“Our members have worked throughout the COVID crisis to keep the economy ticking over. In fact, it was our efforts to implement separation, segregation and sanitisation protocols that ensured not one day was lost at any Patrick terminal throughout the crisis.

“Patrick is not doing it tough. They have achieved record productivity, market share and profits in recent years. The board of Patrick owner Qube just awarded themselves more than $10 million in bonuses after securing over $19 million in Jobkeeper.”

Some of the changes Patrick is seeking to impose include:

- the ability to vary rosters and hours of work at management discretion with no effective recourse to the dispute settlement procedure, which would allow wages of workers to be cut;

- the removal of all current family friendly rosters from the agreement with one common roster across all sites;

- a freeze on more permanent labour and move to increased casual and irregular labour;

- the complete removal of employee input on training, skills and roles;

- a requirements for wharfies to work during rostered time off;

- a reduction in standby, notification, order of pick and minimum allocation periods so important for shift workers’ quality of life;

- the removal of dispute resolution clause, taking away the right to dispute unfair change in the workplace;

- the removal of all local, terminal-specific arrangements from the agreement; and

- a reduction to the union rights clause, including around meetings and training for delegates.