Our Commitment to the First Nations Struggle 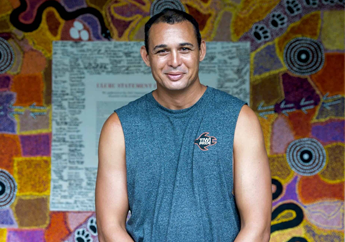 I’ve been a member of the MUA since I was seventeen years old, and it is with the MUA that I learnt of the value of solidarity and unity.

I learnt how our union – the MUA and all other divisions of the Construction Forestry Maritime Mining and Energy Union - has done more than fight for our own wages and conditions over our long history, we have also fought many battles for workers from other unions across all industries and importantly, we have fought for social justice and our communities. Our union has been a leader in bringing our society from one where workers were slaves or mere servants, punished for disobeying the master, to a society that now enjoys universal health care, weekends, various loadings, allowances and legislated rights.

Each of these wins for the union movement were maligned by employers and politicians of the right-wing ideology. Their claims of Armageddon at each progressive step have since been thoroughly proved as selfish fearmongering. Fearmongering that we will see a lot more of. It is our unapologetic representation of members and community that causes them to so vigorously move to destroy us.

As of January this year, I’m now the National Indigenous Officer across all divisions. This is a new role that continues and builds on our tradition to support our members as well as the communities we live in – local, national and global.

In May last year, the first ever conference that our newly amalgamated union held - the first conference of the Construction Forestry Maritime Mining and Energy Union – was a First Nations members conference. In attendance were around sixty Aboriginal and Torres Strait Islander members from all States and Divisions with our most senior elected officials of each Division. Together, we determined the way forward for our part in supporting the First Nations struggle, and those resolutions that came from that conference will be part of my work.

One of the resolutions was to support the proposals in the Uluru Statement from the Heart. This year, the National Aboriginal and Islander Day of Celebration (NAIDOC) theme is from those proposals – Voice, Treaty, Truth.

The proposals are in sequence – Voice first, then Treaty and Truth - for good reason. Voice is first because, as we would understand as unionists: the first thing a collective must do to negotiate greater rights is to set up our representative structure. There are more than one hundred First Nations that have been terribly divided by corporate interest and government bastardry. First Nations advocacy is weakened because First Nations lack the structure and democracy that is important to unity.

The Uluru Statement proposes to set up our representative structure, though further, it also proposes that we protect it by constitutional enshrinement. Constitutional enshrinement of the voice guarantees a say in the decisions that are made about us, because the constitution is the rule book of Australia – the legal document that takes precedent over all others. If our Voice is not in the rulebook, it will suffer the same fate of our previous national representative bodies that have all been replaced, repealed or defunded by hostile governments.

The Uluru Statements proposal for a constitutionally enshrined Voice is a visionary proposal. It is a unifying proposal. Australia is built on a lie: Terra Nullius, which simply means that the British invaders deemed First Nations lands to be unoccupied or uninhabited. Constitutional enshrinement of a First Nations Voice is not only practical by setting up structural empowerment, it is also a strong form of recognition that we were here when the British arrived, we had complex, advanced social and political structures, and we have not died out as was the expectation in 1901 when Australia moved from being a collective of British colonies to being a Federation.

If you don’t know much about the constitution, here is one thing you may not know that is important to Indigenous peoples. Section 51 (xxvi) of the constitution - the Race Power – gives parliament the power to make laws about Aboriginal and Torres Strait Islander people. Unlike other racial or ethnic groups in this country, laws and policies are being made by governments specifically about Indigenous people without our consent, and too often to our detriment. A Voice is the first and most urgent reform because it will start to address this political disempowerment, setting us on the path for the future reforms of Treaty and Truth. These are the reforms that will lead to closing the gap.

Another resolution from the inaugural meeting of First Nations members was to support the campaign against the Community Development Program. The Community Development program is discriminatory – only applied to Indigenous communities – and it is also extremely harsh – there are greater penalties if there in non-compliance, including completely cutting a person from any payment, causing great stress to the person, and also their families. This disgraceful LNP policy is one of the causes for Indigenous people in Australia being the most incarcerated people on the planet.

If you are an Indigenous member of our union, keep your eye out. I will be organising meetings of members later in the year to plan how our union will campaign for the Uluru Statement, and against CDP. If you are non-Indigenous, support the Uluru Statement campaign at www.1voiceuluru.org and get behind our Indigenous brothers and sisters so that we can walk together for change.

In our union, we say ‘Touch one, Touch all’. I remember when I was on the wharf during the 1998 Patricks Dispute. Our backs were against the wall, but the community turned out in great numbers to support us. They turned up during our hour of need because they remembered what we did to support the struggles of others, more than just our own wages and conditions. They turned out to the pickets and supported us, because they were as proud that our union existed, as we were to be members.

To all members, if you would like to be more involved in national campaigns against CDP and for the Uluru Statement from the Heart – get in touch with Thomas. Thomas is also seeking to build a contact list for Indigenous members, so don’t hesitate, get in touch with him and join the peoples movement for Voice Treaty Truth!