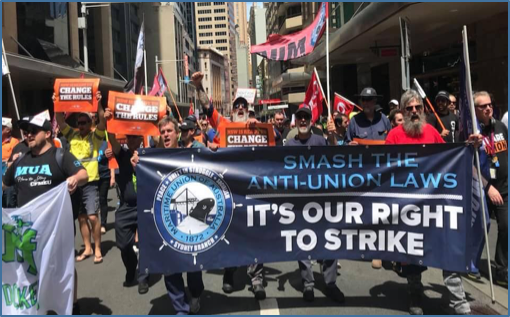 SHIPPING Australia’s absurd, evidence-free claims about waterfront bargaining are just their latest hysterical and destructive attempt to exploit COVID anxiety in the community for their blatant self interest.
None of the limited, legal forms of industrial action undertaken by wharfies are capable of causing the massive delays claimed without evidence by Shipping Australia.

At Patrick’s Port Botany terminal there has been a single four-hour work stoppage. Other actions have been restricted to bans on overtime and upgrading to higher positions.

Likewise, Hutchison Ports Australia’s response to workers taking protected industrial action in the form of a go slow has been to dock their pay 30%, which is the company’s own estimate of the impact of this action on productivity.
Compare these limited forms of industrial actions to some of the significant delays caused by corporate mismanagement at Port Botany and the root cause of any delays quickly becomes apparent.

The day after wharfies undertook four hours of industrial action, Patrick shut the Port Botany terminal for eight hours to undertake civil works on the new rail project. This was the third eight-hour closure for construction work at the terminal in just the last few months.
Patrick has also implemented a new Terminal Operating System in recent weeks. Problems with the implementation of this system have caused significant delays, with IT specialists still on site attempting to fix it.

A couple months earlier, the Patrick terminal came to a standstill for 48-hours after construction work cut a substation power cable.

None of these substantial interruptions to operations were the result of actions by wharfies or the MUA.

Shipping Australia’s spurious claims are nothing more than an attempt to deflect attention from the management inadequacies of their members: international multinationals exempt from cartel behaviour and price fixing under the Trade Practices Act.

MUA members are Australian taxpayers who continue to act in a completely legal manner, meeting all requirements of the Fair Work Act, and acting within Australian regulatory overview.

This is a standard to which Shipping Australia and its members fail to live up.

The entire business model of flag-of-convenience shipping is built on the exploitation of workers and the avoidance of Australian taxes, with many documented practices like double book-keeping and wage theft commonplace.

Shipping Australia should be taking action to fix the real crisis facing their industry, which is the 300,000 seafarers stranded at sea, some for up to 17 months in prison-like conditions.

This is not only a clear breach of Maritime Labour Convention, it is causing extreme hardship for workers and poses increased risks due to fatigue and aggravated stress and anxiety

You would think that common sense and a minimum regard to transparency and accountability would caution this lobby against the double standard of turning a blind eye to this international crisis while finding time to slander Australian workers for simply protecting their industrial rights and conditions in a complex and difficult set of conditions.

The actions of these stevedoring workers continue to be implemented in a manner that minimises potential disruption to the general public, including with clear exemptions for any medical or COVID-19 related cargo.

The union is continuing to negotiate in good faith with stevedoring companies in an effort to resolve these issues and deliver agreements that provide fair outcomes for workers, something very alien to a shipowners association notorious for avoiding tax while monopolising Australia’s essential supply chains with cartel behaviour in their unapologetic self interest.

The MUA continues to work to deliver increased and demonstrated best practice productivity on the waterfront, but only as part of a social contract with the workforce that delivers improved conditions and a shorter working week.

We accept our critical importance within the supply chain and to the community, however, after lengthy negotiations that have gone on for well over 12 months in some cases, the slight industrial urging to the employers to get on and finalise these agreements is legitimate.

We want terminals that provide safe, secure, rewarding jobs, and that are part of a strong domestic shipping industry that can maintain resilient supply chains for our island nation.

Shipping Australia would rather undermine our highly productive industry with false claims that seek to stoke industrially harmful and commercially wasteful conflict in the sector. Par for their course unfortunately.