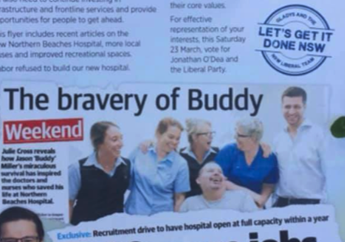 In one of the worst cases of opportunism seen in the 2019 NSW State Election campaign, Liberal candidate for Davidson, Jonathan O’Dea MP, has upped the ante on just how grubby some politicians can actually be.

In his NSW Liberal flyer Good News for the Forest Area published this week, Jonathan O’Dea used a news article about Jason (Buddy) Miller, as well as his photo, in his flyer in an attempt to promote and take credit for a good news story about the Northern Beaches Hospital in the week before the election. The Liberal MP had never requested authorisation from Mr Miller or his family to use his photo or story in campaign publications and has never shown Mr Miller any support since he became ill.

“Starting with a sore throat and being admitted to hospital on 31 October 2018, Jason Miller took a turn for the worse. Within an hour of admission, Jason literally commenced the fight for his life.” Said Assistant Secretary Paul Garrett. “Being read his last rights while in intensive care not long after the admission to Northern Beaches Hospital, Jason was not expected to live.”

Jason (Buddy) Miller was placed in intensive care on life support after being diagnosed with a bacterial infection from both streptococcus and aerococcus that has caused toxic shock syndrome and severe septic shock. He was placed in an induced coma that night as family rushed to his bedside and were told to prepare for the worst. Doctors frantically worked to save him as his internal organs began to shut down. Family were told that his heart would give out and a priest was called to read him his last rites as the family tearfully said their goodbyes.

“Jason Miller surviving was nothing short of a miracle, however came at a significant price.” Said Garrett. “Because of the illness, blood supply to Jason’s hands and feet was severely restricted. He has only just gone through the life-changing operations in recent weeks to have his hands and feet surgically removed.”

Jason (Buddy) Miller proudly worked on Sydney Harbour as a deckhand on the Manly Ferries, is a member of the Maritime Union of Australia and does not want to be associated with the Liberal Party whatsoever.

Jason will remain in medical care for a number of months to come.

“Since his terrible illness, Jason has fought back every step of the way and kept going despite every challenge thrown at him and done so with the best of spirits. It is just disgraceful that his story of inspiration and courage through adversity has been used in this way by this insignificant Liberal backbencher.” Said Garrett

“To think some backbench Liberal MP like Jonathan O’Dea can use Jason Miller’s ill-health for political opportunism is a disgrace. NSW Premier Gladys Berejiklian should call him out and immediately sanction this clown and his grubby antics.”

In a feeble attempt of apologising, Jonathan O’Dea made a $100 donation to the GoFundMe campaign set up to support Jason Buddy Miller. The family has since returned that back to Mr O’Dea.

“If Jonathan O’Dea and the Gladys Berejiklian were serious about hospital care, they would have already come out and supported the call by the NSW Nurses and Midwives Association for mandatory staff- patient nursing ratios in hospitals, instead of leaving the system dangerously overloaded.”

“Jonathan O’Dea, Gladys Berejiklian and the NSW Liberal-National Government are no friends of working people and have a poor track record with industrial relations in NSW.”

“The NSW Liberal-National Government has had eight years to stand up and create better working conditions for people in NSW. Instead it has been a legacy of privatising public assets and cutting frontline jobs. It is a bit late at election time for them to now realise that they should be investing in more frontline hospital staff.”

Support for Jason (Buddy) Miller can continue to be made through his GoFundMe page: