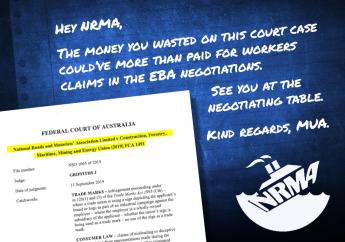 The NRMA is under fire for wasting more money on failed Federal Court action against the Maritime Union of Australia than it would have cost to simply pay workers at its My Fast Ferry business what they are entitled to.

The NRMA is estimated to have spent more than $300,000 on legal action claiming that the MUA had infringed on its trademark by using a logo showing a sinking ferry with the letters NRMA on it on fliers, placards, and other material used at a series of protests aimed at highlighting the ongoing wage dispute.

The Federal Court Judge John Griffiths yesterday dismissed those proceedings and awarded costs to the union, concluding that “the NRMA has failed to establish any of its three causes of action.”

MUA Sydney Branch Assistant Secretary Paul Garrett said it was the second significant legal loss the NRMA had suffered during the dispute.

“This is the second time the NRMA have dragged this dispute through the courts, and despite spending a fortune on a team of high-price lawyers they have again suffered a complete defeat,” Mr Garrett said.

“The extraordinary thing is that it would only cost them $200,000 a year to pay workers at their My Fast Ferry subsidiary what they are entitled to, which is much less than they wasted on this case alone.

“The NRMA continue to try every possible avenue to avoid providing workers who operate ferry services on Sydney harbour with job security or appropriate rates of pay, with approximately 95 per cent of the workforce still employed as casuals.

“This is the second significant legal loss for NRMA, with the Fair Work Commission last December rejecting a workplace agreement after finding that ferry workers were being short changed.

“NRMA members should be asking management why they continue to waste hundreds of thousands of dollars on futile legal battles rather than simply treat their workers with dignity and respect.

“The company is nearly four-and-a-half-years into the contract with Transport for NSW to provide the high-speed Manly service, yet rather than negotiate a sensible outcome that is in the best interest of workers and customers, management continue to fight an expensive and unsuccessful ideological war.

“We remain committed to resolving this dispute, but that won’t occur while the NRMA is content to throw hundreds of thousands of dollars at lawyers rather than provide job security for ferry crews or finally pay them the wages they are entitled to.”