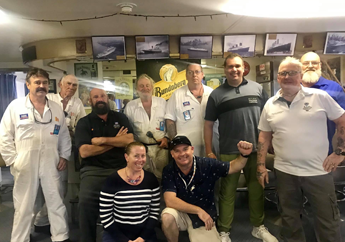 NWSSSC (Northwest Shelf Shipping Service Company Limited) has confirmed to the MUA this afternoon that they are withdrawing their proposed sale of the LNG carrier Northwest Stormpetrel.

NWSSSC had originally intended to reduce the contingent of the Australian crewed ships within the fleet from 4 down to 3 with the proposed sale of the vessel. The intended sale was disputed by the MUA under the Disputes Resolution provisions within the COA. On 10th December 2019 Sydney Assistant Branch Secretary Paul Garrett and the MUA legal department were successful in gaining an arbitrated decision that ensured the retention of 4 Australian crewed vessels in the fleet but the decision did not prevent the company from selling the Northwest Stormpetrel   It had been proposed that when sold, the crew would move onto foreign-flagged ships.

During the meeting held this afternoon with Trident LNG, NWSSSC, AMOU, AIMPE, Garry Keane and Paul Garrett from the MUA, Paul Oliver of the NWSSSC advised that there is a change in their position with regards of the proposed sale of the Northwest Stormpetrel.

Today’s announcement of the cancellation of the sale of the Northwest Stormpetrel will see all four Australian-crewed, unionised ships retained within the fleet and negate any requirement for the crew to transfer off this vessel Australian seafarers have manned since December 1994. All current crewing and EA arrangements will remain undisturbed

This is a massive win for the MUA and gives full effect to the previous decision of Arbitrator Lacy.

Sydney Assistant Branch Secretary Paul Garrett said “With the advances being made by the MUA in the shipping campaign, this is further positive news for Australian shipping and securing the rightful place of MUA seafarers to be up the gangway. It also reiterates the foresight of the SUA back in the 1980s to enter into the COA for the LNG project in the first place, giving certainty of employment to union members. Moving forward, it is appropriate to continue the good work done by the MUA in starting the discussion then shifting ALP policy to establish a national strategic fleet plan, to ensure we include LNG.”

National Secretary Paddy Crumlin said “The MUA rank-and-file who crew these four ships every day need to be acknowledged that it has been a hard time with the potential of losing their employment ongoing since the initial announcement on 27 November 2017. They should be congratulated on how they have got on with the job and continued to carry themselves with the well-renowned fighting spirit of the MUA!”