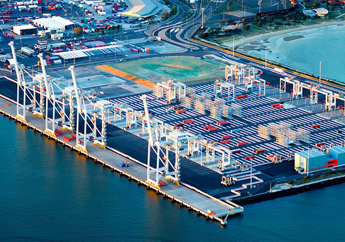 Wharfies are striking for 48 hours at DP World’s Brisbane, Sydney and Fremantle container terminals, and for 96 hours in Melbourne, to fight against automation, outsourcing, cuts to income protection insurance, and dishonest bargaining by the company which is trying to use change provisions in existing agreements to secure outcomes it cannot bargain into new agreements.

The two day strike, which begins Monday morning in Brisbane, is the first in a series of 48 to 96 hour work stoppages planned for container terminals in Brisbane, Sydney, Melbourne, and Fremantle run by Australia’s largest stevedore. Sydney and Fremantle workers will strike this Thursday and Friday, and Melbourne will be out from Wednesday until Sunday morning.

Workers have also imposed a range of indefinite work bans, including bans on upgrades, overtime, and shift extensions. DPW challenged the rights of the Maritime Union of Australia to use bans in the Fair Work Commission, with a decision pending on Monday.
This restriction on utilising the legally protected bans has forced workers into strike action as their legal rights to use the bans was effectively removed by the company and FWC.

The industrial action follows the expiry of a three month cease-fire agreement between DPW and the MUA, which saw the company press ahead with a savage agenda of job cuts and attacks on rights and conditions. Income protection for workers remains as a target of the company.

The strikes will proceed after their protected status was confirmed by the FWC on Friday, when the company sought 418 orders to stop workers using strike action. Fair Work Commissioner Paula Spencer dismissed DPW’s application and reaffirmed the legal and protected nature of the strikes, stating that they could continue.

MUA Assistant National Secretary Warren Smith said the company had unnecessarily escalated the conflict earlier this year when it unilaterally stripped workers of income protection insurance.
“Management initially used the wellbeing of workers and their families as a bargaining tool, and wharfies don’t take kindly to that kind of corporate bullying and intimidation,” Mr Smith said.

“The attacks on wharfies have been escalated by DPW beyond income protection, with outsourcing, automation and downright dishonest bargaining processes by DPW being targeted by workers.

“We will not roll over and accept an unfair agreement, we won’t accept unilateral attacks on workplace rights and conditions, and we won’t stand by while outsourcing and automation are used to axe quality jobs from the Australian waterfront.