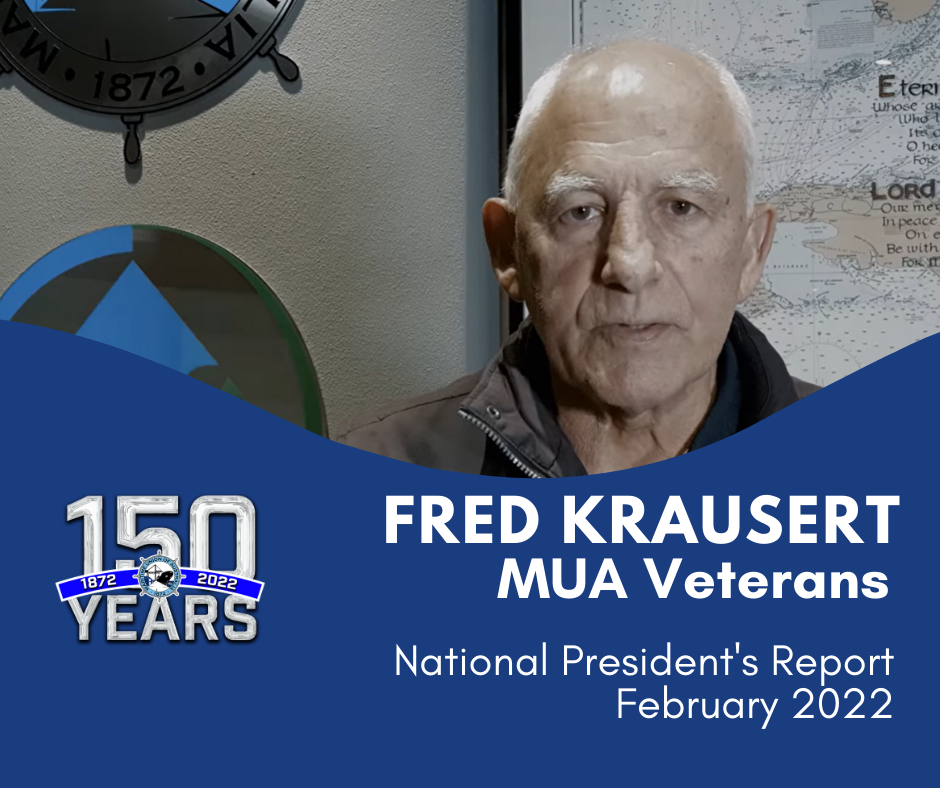 This report is an appeal to all MUA. members, retired members, families, and friends.

In the political arena at this time in history we are facing so many unfriendly fronts from a government that has done nothing but attack the people they are supposed to represent.

I am not a member of the ALP (was for thirty years for the union until my retirement); but I am a realist and know that we don’t always get what we want from politics, however I do understand politics and know that if we don’t change this “anti-people” government we will never recover from the damage they have inflicted upon us.

Just look at the way they keep on wanting to attack us through the various legislations they have introduced; and the deals done with overseas big business and their partners that have us on the back foot all the time.

I want an Australia that will give our future generations an “AUSSIE FAIR GO”, not just the one class that has it all and believes we can all go to hell. These parasites take from our country but never contribute to it and, we all know they pay NO tax.

Now I would like to address the pensioners, the unemployed and the hardships they suffer.

Once again, we are starting a New Year with so many conversations regarding COVID and all the illness and dying it brings with it.

On a world scale where is it going and what is next? We can only analyse the whole situation we are in as a complete failure by a government that is unable to address the emergency situations as they arise.

All they seem to be able to do is lie, use the blame game with no national direction - each State running its own course. How are we ever going to navigate through a pandemic or any situation when we only have a “blame game” Government and no united front?

So many chances have been lost – not taken up. No forward planning. No direction has occurred. Testing was late in coming and is confusing. I could keep going, but I will finish this section by repeating what I have said before “we must do everything in our power to rid this country of this Government that only rules on lies and on behalf of its own class with no ability to navigate through the vital issues facing us".

All we seem to have is “witch-hunting” and placing Australia into so much debt that our future generations will have to pay the bill.

In an announcement made earlier this year the German Government stated that their nuclear power stations would all be permanently shut down by 2030; and they will permanently decommission the 7 oldest ones which were switched off following the Fukushima disaster. They will be turning their backs on nuclear power and more broadly embracing wind and solar energy generation.

However, on the home front the Australian Government is attacking us by doing deals with the USA and the United Kingdom to procure nuclear powered submarines; and with the USA to supply oil. No deals or agreements to procure merchant ships or tankers – which are the life blood of this country.

Since the inception of this Coalition Government in 2013, the people have been under constant attack, they ignore the homeless, small business and the hundred thousand children that go without proper food, care, and shelter.  Jim Donovan has outlined that the billionaires around the world have gained $502 billion in profits – great – while we are sick and dying.

The lack of public housing and affordable rental properties is not being addressed and is an indictment on this Morrison Government.  If it was not for those good people who on a day-to-day basis work to support those in need it would be a much worse situation. This pandemic has highlighted the enormous amount of stress our front-line workers are suffering to the point it is affecting their health.

Recently, the Leader of the Labor Party, Anthony Albanese, announced Labor’s shipping policy which includes the return of Australian ships, manned by Australian crews, carrying Australian cargoes. Joy to our ears we say. At the same time as announcing ALP’s shipping policy, he also advised they would be delivering a fast train service between Sydney and Newcastle.

I do not have to address our concerns regarding the shipping campaign.

I am a great believer that “a face-to-face campaign” pays off. We only have to look at WORKCHOICES and the win we had which resulted in Howard losing his seat. We CAN do it again; the ACTU and the whole UNION MOVEMENT around Australia must get behind the campaign to change this government.

We can do this with people power going round shopping centers, regional shows like AG-QUIP and wherever we are needed speaking to the issues confronting us every day, all of which are causing hurt and suffering to too many people across the country. I believe if we do it this way, we stand a good chance of winning the people over. There are 4.2 million pensioners in Australia, not one tenth of them would have a computer, so the importance of a face-to-face campaign is a must. There will be more in the coming months from our campaign team – but we must start planning now.

Comrades, as stated many times our HEALTH SYSTEM IS UNDER ATTACK.  Funding for clinics has ceased and doctors are unable to service the public sector. Add to this the cuts that have taken place in Medicare under this Coalition government and these attacks will continue should Morrison’s team be re-elected. The ALP has promised to restore Medicare to its fullest capacity.

Also, to address the skills shortages in Australia the ALP has stated that under Labor, Australians studying in an industry with a skills shortage will be supported through the provision of FREE TAFE.  They also plan to create more university places.

This COVID crisis has played into the Federal Government’s hand. Diversions and double standards are the order of the day resulting in the public not knowing what is going to happen next.

On 1st January 2022 the government’s revamped reverse mortgage scheme now known as The Home Equity Access Scheme (HEAS) came into being. It is still the same old evil con job. Unfortunately, some senior groups have fallen for it – but we ask that you be wary. If there is an outstanding loan at the time of your death, the amount will usually be recovered from your estate. Interest will continue to accrue until the loan is repaid. The main change is the reduction from 4.5% to 3.95% interest rate.

To conclude, I come to the Cashless Debit Card which this Government has said they do not want to introduce across all who receive a government payment. I do not believe this government is being honest regarding this card – more likely it will be high on their agenda should they be re-elected again.

Comrades, I call on all of you to please support the people of Australia and our Unions to elect a Federal Labor Government this year.

You can volunteer for your local ALP MP or candidate here: https://www.alp.org.au/volunteer

We may be retired from the workplace – but never the struggle.

On behalf of the National Executive of M.U.A. VETERANS

Yours in Unity and Solidarity