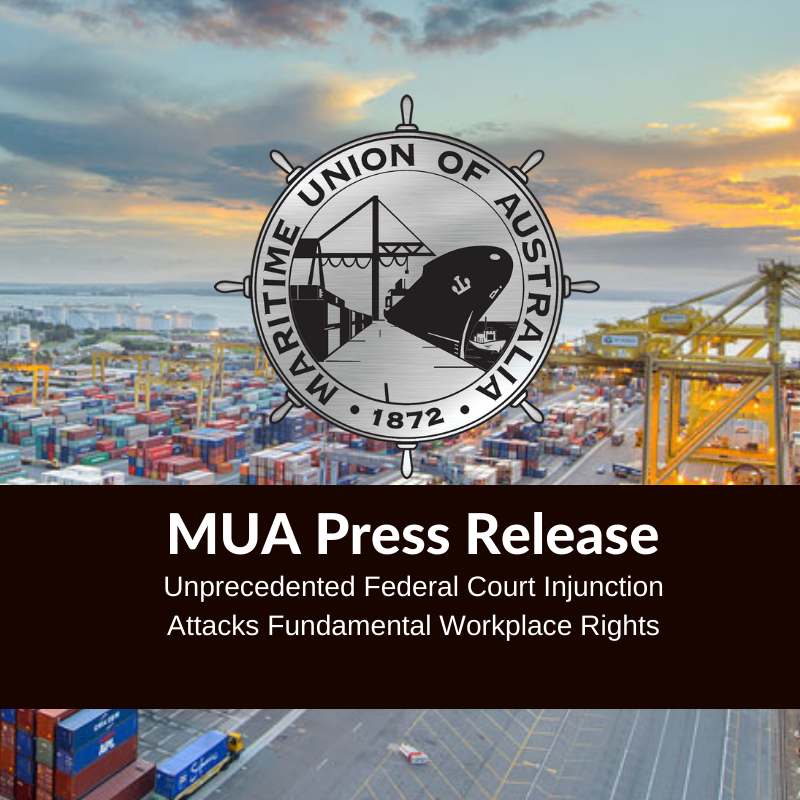 Wharfies are outraged after the Federal Court issued an interim injunction banning them from undertaking legally protected industrial action as part of their fight for a new workplace agreement, describing it as an attack on the fundamental democratic rights of all Australian workers.

The Maritime Union of Australia said the decision should send a shudder down the spine of all working Australians, with the Federal Court entrenching the power of foreign and local corporations and undermining the ability of workers to have any chance of standing up against workplace greed, inequality and for justice in the workplace.

The union said the decision effectively bans those fundamental traits so cherished by Australian workers, which have achieved so many gains and conditions that we continue to enjoy today, and are now all up for grabs by anti-worker legislation, courts and commissions.
MUA Assistant National Secretary Warren Smith said the Federal Court decision was just the latest in a long list of aggressive moves by DP World aimed at forcing workers to accept management’s demands for a new workplace agreement.

“This injunction doesn’t just prevent wharfies from taking legally protected industrial action, it is an alarming attack on democratic rights that will give companies open slather to strip all Australian workers of long held workplace conditions, which will effectively mean reduced standards of living for all,” Mr Smith said.

“In the Federal Court, DP World relied on distortions and straight-out verballing to muddy the waters in an effort to strip MUA members of their lawful right to take industrial action.

“In the last year, DP World management have launched unlawful and aggressive attacks on workers’ rights, cancelling approved holidays, attempting to strip away social benefits such as income protection, sacking workers, docking pay, preventing workers from meeting with their union representatives, cancelling Christmas bonuses, and threatening the mass termination of 10 per cent of the workforce.

“Our members don’t like corporate thuggery and they won’t back down to intimidation. They are willing to take the necessary steps are necessary to defend their hard-won rights and conditions from this company and win new protections for themselves and their families.

“By using the Federal Court to strip away the democratic rights of Australian wharfies, DP World have made this the fight of every unionist and every worker in this country and around the world whose rights have just been removed in the name of corporate profit.”