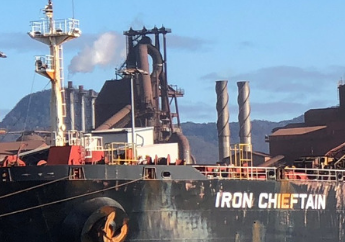 The Iron Chieftain will be leaving Port Kembla under tow for the long journey to its final resting place in Turkey. The Chieftain suffered irreparable damage after a fire on board in June last year. One of the last Iron ships with an Australian Crew before that fateful day.

On Monday, 18 June 2018 the CSL Iron Chieftain was alongside Berth 113 in Port Kembla Harbour discharging a load of dolomite when the belt drive system caught fire which quickly spread along the system.  The IR on watch immediately raised the alarm and the crew, having been woken by the emergency sirens, followed the onboard firefighting procedures with the CIR and another IR donning the fire suits and valiantly entering the tunnels to do what they could to stem the fire however they were eventually pushed back by the thick smoke and heat.

The fire had taken hold and from that point on there were 110 firefighters and 5 units daily fighting the blaze from the wharf with 2 Svitzer tugs, whose response time was equal to the emergency services crews, spraying water directly onto the flames initially then maintaining boundary cooling duties on the hull. In all it took 5 days before the fire was brought completely under control.

Due to the significant damage the decision was made by the ship owner CSL to retire the ship.

The Iron Chieftain was the 3rd last Australian crewed Iron Boat before the fire and since then the Lowlands Brilliance and the Mariloula have had their Australian Crew removed leaving no Australian Crewed Iron ships servicing the coastal trade for BHP and BlueScope.

The Iron Chieftain and Tug crew who fought the fire along with local emergency authorities and prevented a major catastrophe, as will farewell one of the true workhorses of the Australian Coast.