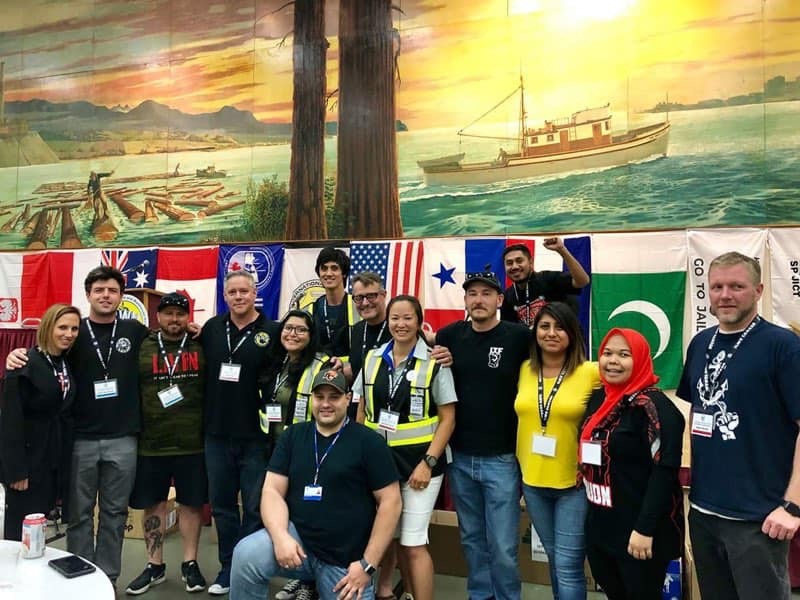 The MUA sent a small delegation to the ILWU Youth Conference in Vancouver, Canada 4-6 September.

My trip to Canada for young worker’s conference with the ILWU was one of the most unique and amazing experiences I have ever been presented with.

What I learned at the conference was invaluable, from how trade unionism traditionally works and also how the ILWU itself works which is very different to how the MUA operates as they have their local’s system where we have our branches, it was also very interesting to see how the ILWU holds us in such high regard in the international trade union community, this is due to our militant rank and file and also how Harry Bridges the Australian born trade unionist who helped establish the ILWU.

We further learned about the Patricks dispute of 1998 which for myself was an eye opener as I was not yet born at the time so it was interesting to learn a bit more about Australian trade union history, lastly we learned about the ITF and how it works and how big the international trade union community is and to learn about other issues going on around the world.

My time in Canada was very interesting and challenging for myself, it was an opportunity for myself to step out of my comfort zone of Sydney harbour and travel to another country to meet new people and experience different cultures. The conference enabled me to meet many different people and even presented me to opportunity to get up and address the conference to talk about my experiences in the work place as a union member and what they could take away from it this further pushed me out of my comfort zone but enabled me to further my public speaking skills, as a whole the conference was well worth every second of my time and would recommend anyone if they get the opportunity to attend.

The highlight of my trip had to be listening to Willie Adams address the conference he is an amazing and inspirational speaker and to hear his thoughts on the trade unionist community and the future of the community was definitely thought provoking and inspiring, there were many different highlights of the conference but I have to say besides listening to Willie speak it was meeting all different people from around the world.

First, I would like to thank the MUA for giving me the opportunity to represent them in Canada.

Overall the ILWU 2019 young workers conference was a great experience.

To see people from Canada, USA, Croatia, Indonesia, Poland and Australia all come together to discuss their struggles and successes was a real eye opener.

For me the MUA war on the waterfront video had the biggest impact. I had never seen that video before, and I couldn't believe that Australian wharfies had been dragged of their work site at midnight by men with balaclavas and attack dogs.

It showed me the importance of union power, global solidarity and the general community spirit of the MUA.

The whole experience was great. To see so many young people come together with one common goal was truly empowering.

ILWU Canada YWC was mandated to be held every 2nd year at the 32nd annual ILWU Convention in 2012 and since has gone from strength to strength this year’s them was educate, agitate and organise 3 words all militant left-wing unions such as the MUA and ILWU should be very familiar with. All involved in organising should be firstly congratulated on this great initiate and it shows just how dedicated the ILWU Canada/international is in ensuring that the next generation of their union will be engaged, active and educated. These young workers will undoubtedly go on to be future leaders back in their locals and possible at higher levels in the future within the ILWU.

A highlight of conference was a presentation given by a retired Longshoremen, labour activist and ex VP of his local Steve Nasby. Steve spoke from the heart and talked about the importance of educating the next generation Steve was responsible for organising the original ILWU Canada young workers committee and conference. He spoke of real working-class values, collectivism, unity, equality, standing up for your coworkers, standing up for union principles and human rights not only on the job but taking these core working class values/principles back into your communities something that is vitally important for all workers today and something that I identified with.

Steve also talked about the importance of empowering young female wharfies which led to a really special moment and showed just how much this meant to him when it bought him to tears to mention Viri Gomez and meeting her on the job Steve encouraged Viri to get more active and involved in the ILWU young workers committee which has been a major success as Viri was elected on their Young Workers Committee and was also elected Co-chair of the ITF young dockers last year in Singapore at the ITF congress. At the end of Steve’s amazing talk, he was joined on stage by the young workers committee and presented with a special dockers hook by 2nd VP Dan Kask (who Steve also identified and got active). Moments like this show just how important the actions of dedicated older members are in empowering and mentoring younger workers and just how invaluable it is.

The conference was in the best traditions of international working class and only strengthened the bonds of solidarity and unity between the MUA and ILWU and the important role of the ITF in campaigning and fighting for the rights of workers the world over. As Harry Bridges stated, " The most important word in the language of the working class is Solidarity".