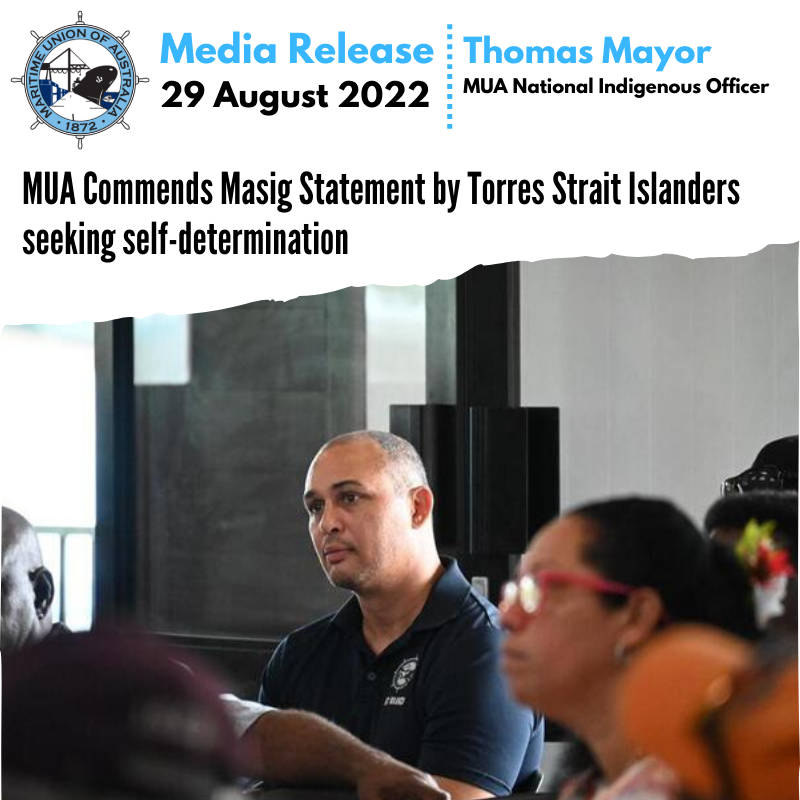 The Maritime Union of Australia has commended and lent its support to communities of the Torres Strait who are seeking self-determination and greater autonomy, which they’ve outlined in a four point plan called ‘The Masig Statement - Malungu Yangu Wakay (Voice from the Deep)’.

The release of the statement comes after a visit to the region last week by Prime Minister Anthony Albanese and Indigenous Australians Minister Linda Burney and amidst a significant, national campaign for formal recognition of First Nations people in the Australian Constitution.

The four aims outlined in the Masig Statement are to achieve self-determination for the people of the Torres Strait and Northern Peninsula area; freely determine political status and pursue economic, social and cultural development; self-government in matters relating to internal and local affairs, and create partnerships with regional stakeholders, and the Queensland and federal governments to achieve the region's goals and aspirations.

Thomas Mayor, the MUA’s National Indigenous Officer, said the Torres Strait Islander ‘Voice from the Deep’ will only add strength to the Uluru Statement from the Heart, which was launched in 2017.

“I think Torres Strait Islanders being a part of the Voice will lift that Voice and make it stronger, and the other way around,” he said.

“Listening to the conversations here, just like the issues I’ve heard as I’ve travelled the country, there are similar issues here. When Aboriginal and Torres Stait Islander Voices can come together, these issues are more likely to be addressed.”

“A Voice to Parliament, with strong regional and local representations, is the key to improvements for Aboriginal and Torres Strait Islander people. A referendum is vital.”

Torres Strait Island Regional Council (TSIRC) Mayor Phillemon Mosby, said the Masig Statement can work alongside the Uluru Statement from the Heart, and support the Voice to Parliament.

“The Masig Statement is a mandate from the people for the leaders of our region to stand together in unity, to support things like the Uluru Statement to support the movement of First Nations people, for their rights and interests to be reflected and enshrined in the fundamental document of this country, the constitution," he said.

"We fully support that ... We see that voice to parliament and constitutional change will give our voice a unique place in this country."

The document seeks a beginning of regional sovereignty in the Torres Strait by August 2037, heralding the release of the Masig Statement as ‘the beginning of a new beginning’.

The Maritime Union of Australia has a long history of campaigning alongside First Nations communities for justice, equality and recognition and wholeheartedly supports Torres Strait Islanders’ push for self determination through the Masig Statement.