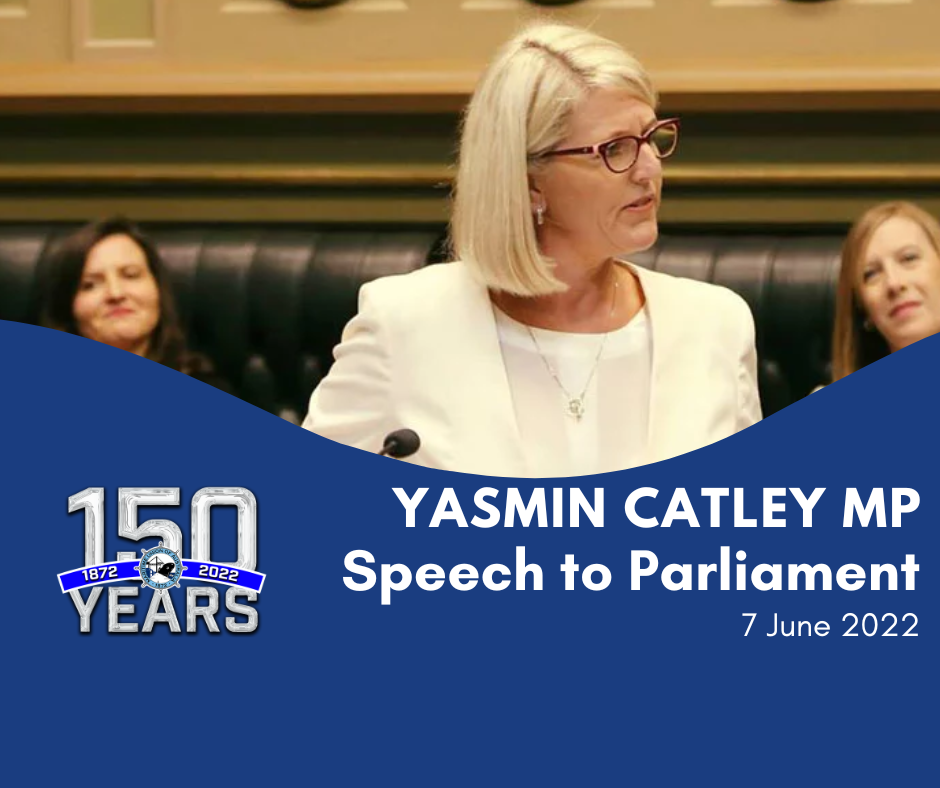 This year marks the 150th anniversary of the Maritime Union of Australia, the great MUA.

The MUA had its beginnings on the waterfront in Melbourne in 1872 with the first seamen's union, which became the Federated Seamen's Union of Australasia two years later.

That same year, the first local waterside workers unions were formed, representing wharf and dock workers. There was the Wharf Labourers' Union in Sydney and the Port Adelaide Working Men's Association in Adelaide. The MUA has always had a reputation for effective and determined political leadership, and this had its roots early on. That is why, in the year after Australia's Federation, a federated union of waterside workers was established, bringing all of the local port unions under a national leadership. They knew then what all unionists will tell you now: We are stronger together.

In 1993 the Seamen's Union of Australia and the Waterside Workers' Federation of Australia amalgamated to become the MUA. Since then the MUA has developed a reputation for principled and resolute political and industrial representation for its members throughout Australia.

I am fortunate to have been closely associated with the MUA and with seafaring and waterside work throughout my life. I am proud to bring the perspectives of these communities into this Parliament. My father, Jack Catley, was a seafarer and is a lifelong trade unionist. He is a proud man. As a young woman entering the workforce, my dad told me that two of the most important things I could do were to join my union and to put money aside for superannuation. This was before it was compulsory. Seafarers and waterside workers are among the most politically engaged groups of workers in our society. They knew all along how important it was for working class people to save for their retirements. They also understood that they could use those savings in the meantime to stake a claim in the networks of capital that control workplaces and use their collective financial influence to improve societies.

My husband, Robert Coombs, was a seafarer and rose to become the secretary of the Sydney branch of the MUA at a time when Sydney Harbour was still one of the busiest ports in Australia. It is easy to forget that, as recently as 2005, we had a container terminal at Darling Harbour and White Bay processing thousands of ships every year.

More recently, my daughter Alex has been training as an officer aboard coastal trading ships and will continue the Catley-Coombs family connection to seafaring and maritime work. The MUA now represents maritime workers in industries as diverse as seafaring, stevedoring, inland navigation, diving and port services. With more than 98 per cent of Australian imports and exports moving by sea, the MUA's work is as important as ever.

I pay tribute to the national leadership of the MUA: National Secretary, and my friend, Paddy Crumlin, Deputy Secretary Warren Smith and assistant secretaries Adrian Evans and Jamie Newlyn. I also pay tribute to all of the branch secretaries around Australia, particularly those from my home port of Newcastle, Glen Williams and Denis Outram.

I also acknowledge the political leadership the MUA has taken recently on the issue of First Nations justice, led by its National Indigenous Officer Thomas Mayor. What a week to mention this. I also acknowledge the MUA's work on workplace justice and empowerment for working women, led by its National Women's Officer Mich-Elle Myers. Once again, the MUA is fighting from the front on the social and political issues of our times, working towards a better and fairer society for all working people.

It has always been an active, political and progressive organisation, and I know it will continue this rich history for generations to come.

After all, the MUA is here to stay.