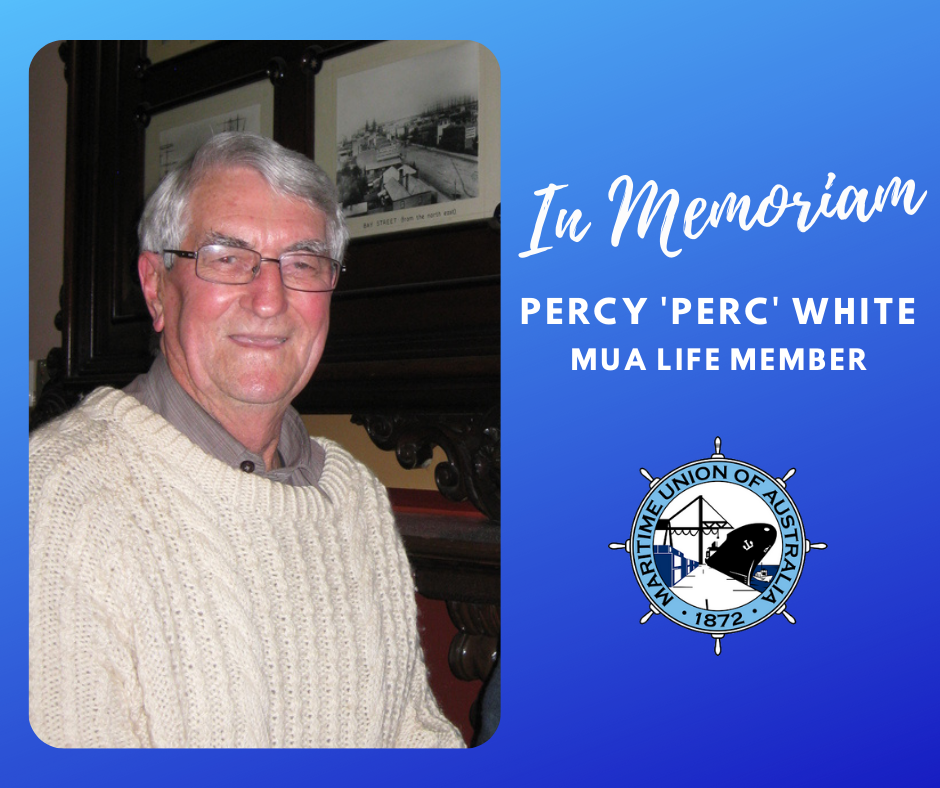 The MUA and the ITF express their deepest sympathies to Perc White's family on his passing after a rich, productive and meaningful life in support of his family and others, particularly those in great need.

Perc was a working class hero.

Supporting the union and fighting for workers rights was followed by a retirement that did the same and was at the core of Perc’s life.

A great internationalist, I had the great honour to accompany Percy on a number of delegations overseas where he spoke and represented the union in general and veterans in particular with the great conviction of the rank and file and from his deep experience as a working class activist and delegate.

His support for the Republican movement in Ireland, the Liverpool Dockers, his anti-nuclear and peace activism and his involvement in many Australian and International campaigns for solidarity, social justice and labour rights were known, respected and admired by generations of workers here in Australia and around the world.

His patient demeanour and faultless grasp of the issues together with his humorous observations usually accompanied by a little wink of the eye made him enormously influential in debate while also making him many friends who greatly loved him.

He was part of the MUA delegation to Mexico City where we ran a rank and file campaign to win the Presidency of the ITF and as always his support and wisdom were an important part of winning that day and helping the ITF become more activist and militant.

Mostly Perc led by example, with the quiet authority of his experience and standing.

A Port Melbourne boy, he was so well known and respected that he served three times as the Mayor of Port Melbourne and counted many politicians and leading community activists amongst his friends and fellow travellers.

His long and decent life and the many achievements that he helped bring about for his community, our union and labour rights, peace and social justice have led many generations of fellow working men and women down the same path to a better world.

Vale Perc White -- true friend to many, comrade to all , family man, proud unionist and lifelong defender of justice peace and workers rights. Now at rest.