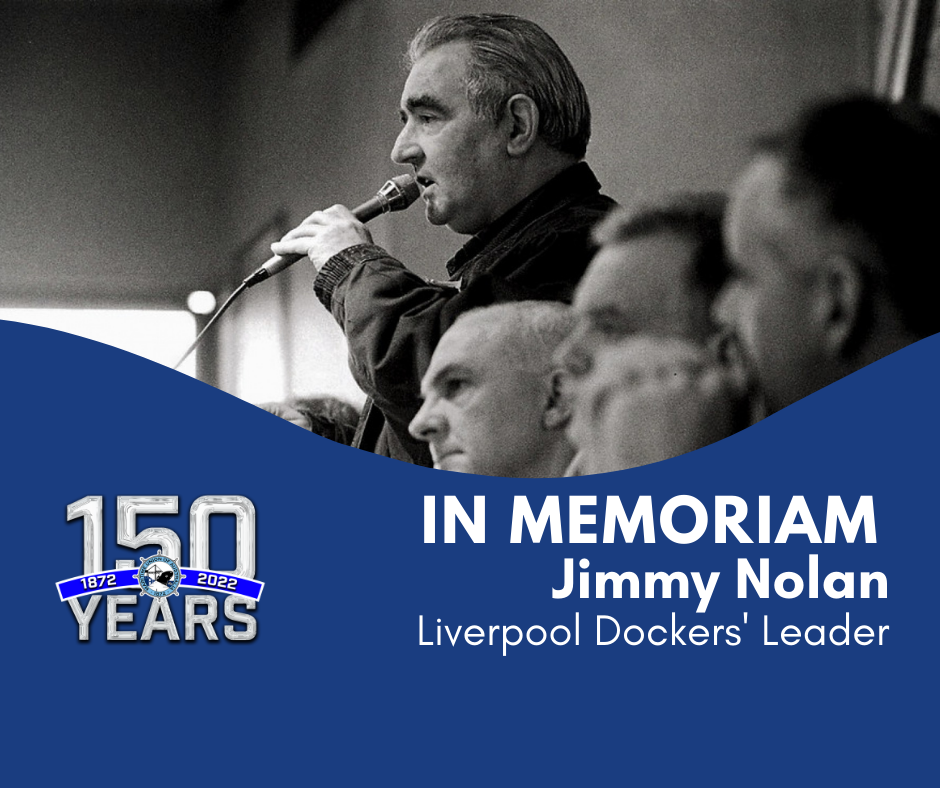 PADDY CRUMLIN
NATIONAL SECRETARY - MARITIME UNION OF AUSTRALIA
NATIONAL PRESIDENT - CFMMEU
PRESIDENT - INTERNATIONAL TRANSPORT WORKERS FEDERATION
CHAIR - ITF DOCKERS SECTION
On behalf of the Maritime Union of Australia and the CFMMEU, along with international transport, dockers, and other maritime unions, we offer our deepest sympathies and condolences to the family, friends and comrades of the legendary Liverpool docker Jimmy Nolan.
Jimmy Nolan was trade unionist of the highest calibre, who never put personal ambition above the collective interest – no matter the cost.
Jimmy worked tirelessly for the Transport and General Workers' Union (T&G), and its successor Unite the Union. He was deeply respected by all who were fortunate enough to work with him.
Jim was part of the key leadership in the Liverpool Dockers Dispute that was the forerunner of a series of international attacks on Dockworkers that included the Patrick Dispute and the ILWU lockout.
Jim and the Liverpool Dockworkers worked tirelessly with international Dockers' and Seafarers' unions, rallying solidarity and mobilising an international campaign that continues today.
Being locked out and never reemployed only strengthened Jim's resolve and commitment, to both the international and national solidarity campaign - through education, training, solidarity forums. These actions continue to resonate today, when attacks continue to mobilise against dockworkers and seafarers across the world.
A rank-and-filer, Jim and his comrades, brothers and sisters, never forgot where they came from. He was enormously respected by unions and unions' senior leadership for over 25 years.
To those who knew him he was humorous, generous and excellent company. He lived his life through a humility strengthened by his strong principles. ‘Never cross a picket line’ was fundamental to these.
His solidarity was always international, as was his reputation a relentless fighter for the working-class, his class. Like the best trade unionists, he brought people together, and he understood that when we are united, we are at our strongest. He was a man with no time for sectarianism or division, Jimmy was a socialist and trade unionist of the old school who understood the class struggle and committed his life to it.
Jimmy’s passing is a huge loss especially to his family, friends and dear comrades. His loss to the wider trade union movement will be felt across oceans for years to come. We pay our sincerest respects to Jimmy, and offer our humble and heartfelt condolences to his family. This is a sad day.
Vale Comrade Nolan; docker, internationalist and socialist. A man of community, family, and human and labour progress and defence.