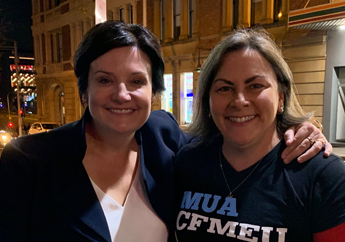 Members of the Maritime Union of Australia Newcastle Branch at their May monthly meeting unanimously endorsed a resolution declaring their support for Jodi McKay to be the next NSW Labor Leader.

"Jodi has always supported a container terminal in Newcastle, which is the single most important development opportunity in Newcastle and the Hunter region with the potential to shape the future of the economy and drive employment.

"Jodi has declared her longstanding commitment to values and justice for working people, ensuring that Labor will continue to fight to criminalise wage theft, introduce industrial manslaughter laws, and crack down on dodgy labour hire. These are all commitments the MUA supports.

"Jodi is a person of great integrity and has fought battles against powerful forces which ultimately cost her seat in Newcastle.

"She has a proven track record of standing up for working families and MUA members believe she will be a great advocate for those who have no voice in the parliament.