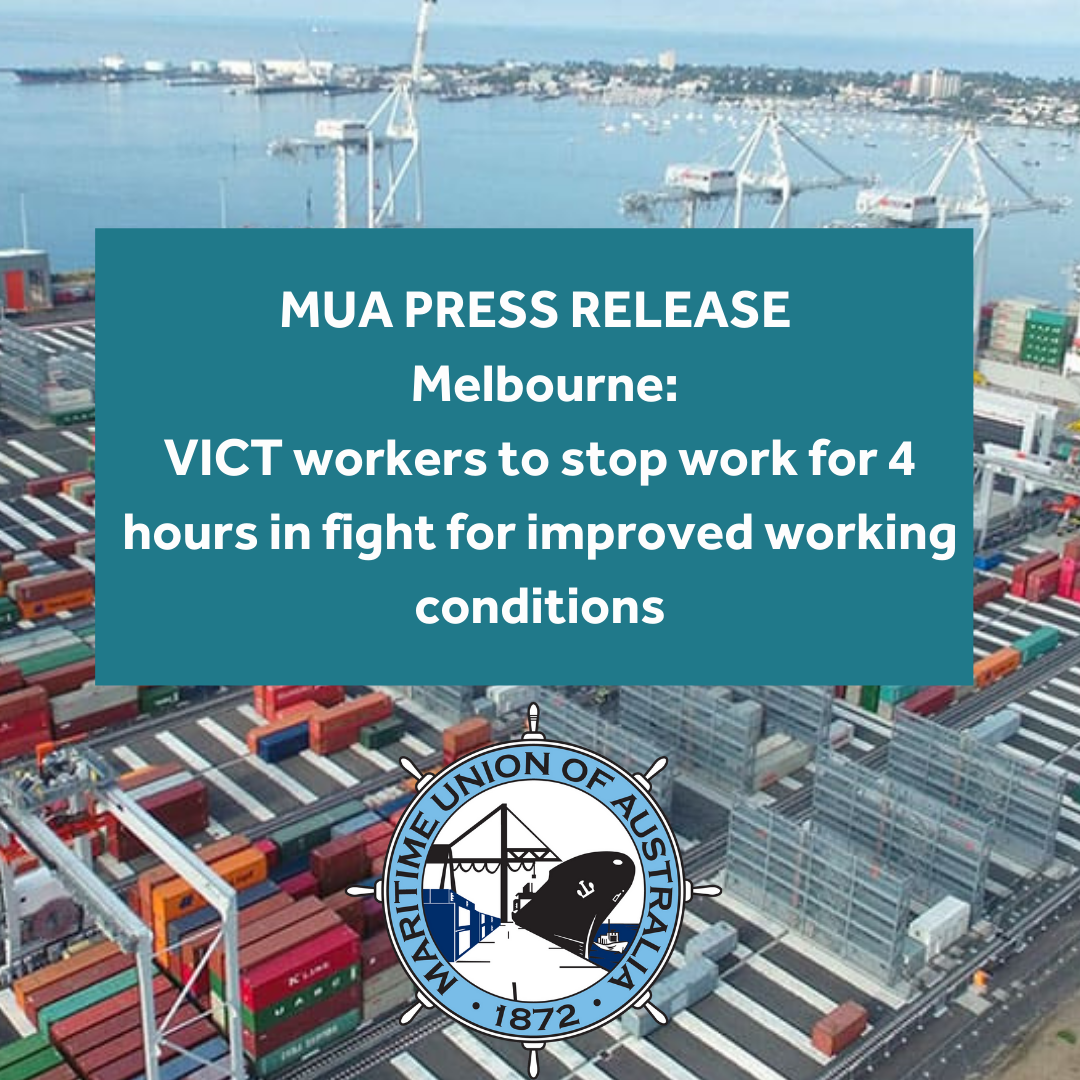 Workers at the Victoria International Container Terminal in Melbourne will undertake a legally protected four-hour work stoppage next week as part of their campaign to address unsafe staffing levels and improve working conditions.

Work at the VICT terminal at Webb Dock will cease between 4pm and 8pm on Tuesday, 16 February 2021.

VICT workers have overwhelmingly rejected two proposed company agreements — with more than 90 per cent voting against the most recent offer — instead demanding a union-negotiated agreement that addresses their serious concerns around excessive hours and unsafe staffing levels.

MUA Western Australia Branch Secretary Will Tracey, who is coordinating the negotiations on behalf of the VICT workforce, said the dispute centred around the unacceptable working conditions at the terminal.

“VICT are under the mistaken belief that just because they’re running an automated container terminal, they can treat workers like robots,” Mr Tracey said.

“Unlike the machinery they operate, these workers have families and life outside of work, and they deserve a workplace agreement that protects their safety and quality of life.

“Workers report being required to work huge amounts of overtime — in many cases between 50 and 70 additional 12 hour shifts during the last year — due to the company’s refusal to employ an appropriate number of people.

“This same shortage of workers has resulted in the company pressuring staff not to take breaks during their 12 hour shifts, making it impossible to have a meal and extremely difficult to even use the toilet.

“This is not only unpleasant, it’s a fundamental safety issue, which is why workers are demanding improved staffing at the terminal as part of negotiations for a new workplace agreement.

“Workers also report extreme difficulty with taking annual leave, because the terminal is so short staff, with some told they will only have leave approved if they can source their own replacement from among their workmates.

“The result of this appalling situation is that approximately 95 per cent of the workforce have joined the union in recent years, with a clear set of demands to improve conditions at VICT and bring the company into line with how other Australian container terminals operate.

“VICT, which is controlled by Philippine billionaire Enrique Razon, has repeatedly refused to engage with the issues their Australian workforce have raised, with management going so far as to walk out of negotiations last week, further aggravating tensions.”

Mr Tracey said the company was in denial about how frustrated workers were, and their willingness to escalate the dispute through all legal means to achieve a fair outcome.

“All the union is doing is putting forward the claims of VICT workers. This is a rank and file driven campaign, led by the local bargaining committee, outlining the clear desires of the entire workforce to improve conditions at the terminal,” he said.

“We have outlined a range of offsets to cover the costs of these claims, particularly around improvements in staffing levels and hours of work, yet the company has repeatedly refused to even cost our options.

“VICT have also failed to provide any evidence quantifying their outlandish claims about the cost of our proposed changes, instead making statements that simply don’t represent what we have proposed.

“They can’t walk away from the fact that their workforce is unified in their demands for a radical overhaul of staffing, rosters, and other arrangements at the terminal.”

Mr Tracey said the company was also exaggerating the level of automation at the terminal, with the majority of employees still undertaking manual work.

“The company likes to claim that their workforce is simply sitting at a computer terminal, operating machinery remotely, but the fact is most are still engaged in manual work,” he said.

“Many tasks simply can’t be automated — in some cases, such as the pinning of containers — the automated machinery has simply failed to deliver, requiring those tasks to again be done manually.

“For most workers, their roles are extremely similar to those undertaken at any other container terminal in the country, which is why they are so unhappy with work practices and conditions that are so far below the industry standard.

“It doesn’t matter whether you perform a job manually, or sit at a computer terminal, it simply isn’t safe to have people working 12-hour shifts without a break, working for 60 hours or more a week, or doing a run of eight or ten 12-hour shifts in a row.

“These workers are not the automated machinery many of them operate and they are simply demanding well overdue change at that terminal.

“VICT needs to stop attacking its workforce and instead undertake genuine negotiations that result in an agreement that addresses the many serious and concerning problems at this terminal.”