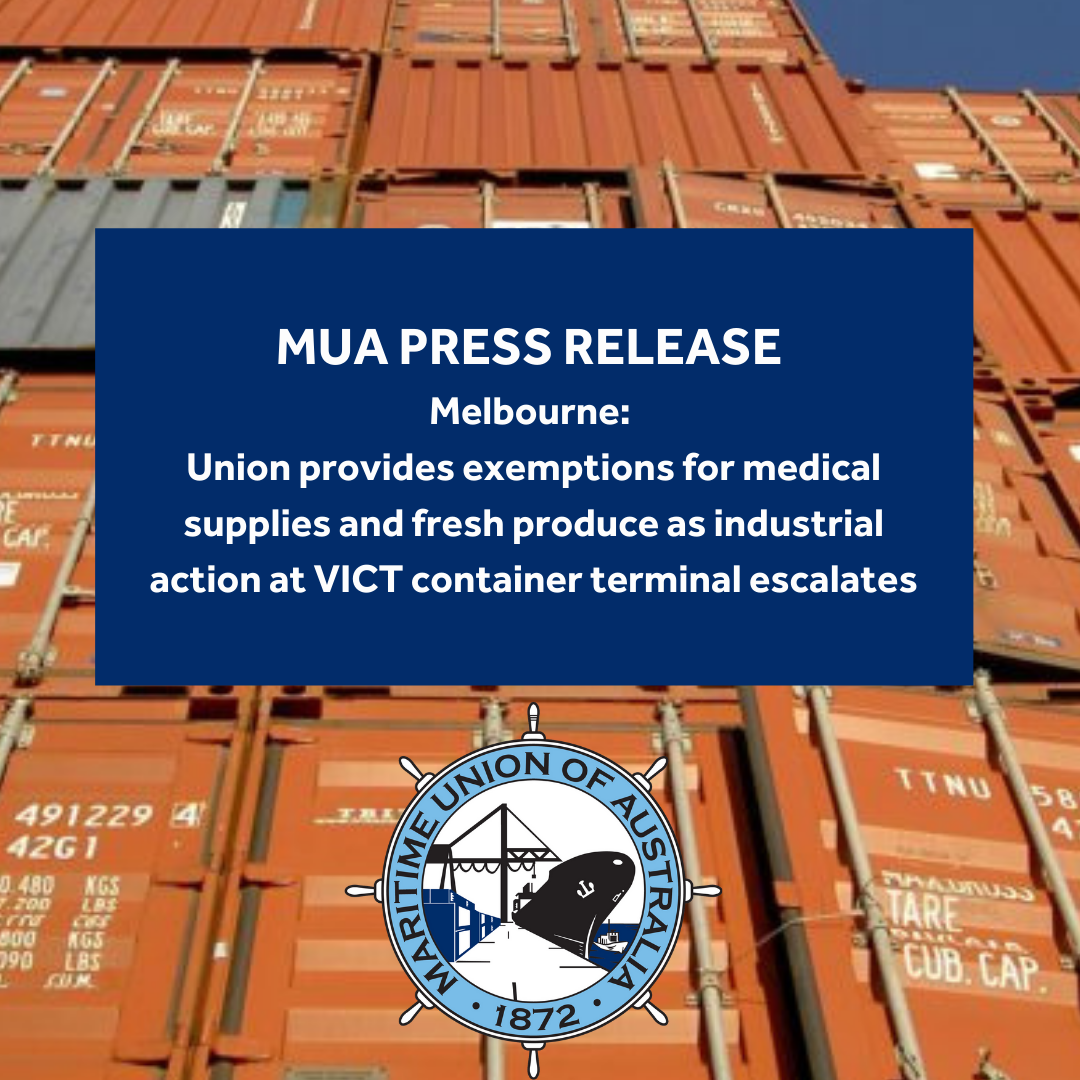 Legally protected industrial action will be expanded from later this week at the Victoria International Container Terminal in Melbourne, with workers undertaking a series of stoppages and bans as they fight for a new workplace agreement that addresses excessive hours and unsafe staffing levels.

The Maritime Union of Australia has written to VICT outlining a proposal to ensure any containers that contain medicines, medical supplies, or urgent medical equipment are exempt from the industrial action.

The union has also committed to exempting all refrigerated containers from the planned industrial action, ensuring agricultural exports, fresh food, and perishable goods are not impacted.

In an effort to reduce any potential impact on third parties, the union is also providing extended notice of planned actions to assist the company with making appropriate arrangements for essential goods.

The notified industrial actions to take place at the VICT terminal at Webb Dock, in accordance with the Fair Work Act, include:
- a 12 hour stoppage from 6pm on Friday 19 February;
- a 36 hour stoppage from 6am on Sunday 21 February; and
- a series of work bans, including on working overtime, the use of personal phones for work purposes, and other specific work tasks.

VICT workers are able to legally undertake the work stoppages and bans as part of their campaign for a new workplace agreement following a formal ballot, conducted by the Australian Electoral Commission, in which 100 per cent voted in support of all 19 forms of proposed industrial action.

MUA Western Australia Branch Secretary Will Tracey, who is coordinating negotiations on behalf of the VICT workforce, said the union was committed to ensuring the industrial dispute didn’t impact on medical supplies or fresh produce.

“It has always been the union’s practice to grant exemptions for essential cargo, reducing any adverse impacts on third parties from bans and stoppages,” Mr Tracey said.

“We have written to VICT, outlining our proposed exemptions for all containers carrying medicines, essential medical supplies, and urgent medical equipment, along with any refrigerated containers, such as those used to transport agricultural exports and perishable goods.

“We have requested the assistance of the company to identify any containers carrying essential cargoes to allow our members to move them as a priority, but we will need their cooperation to protect the community from any adverse impacts.”

Mr Tracey said the workforce had been left with no choice but to escalate industrial action in response to the company’s refusal to address unacceptable and unsafe working conditions at the terminal.

“VICT thinks that just because this container terminal is automated, they can treat workers like robots,” Mr Tracey said.

“Examples of this unsafe and exploitational attitude include workers being pressured not to take breaks during their 12 hour shifts, with many complaining they struggle to eat or use the toilet.

“Many have been required to work huge amounts of overtime — in some cases between 50 and 70 additional 12 hour shifts during the last year — because the company refuses to employ enough people.

“The same inadequate staffing means workers find it extremely difficult to take annual leave, with management telling them it will only be approved if they can convince workmates to undertake overtime shifts to cover them.

“Unlike the machinery they operate, workers have families and life outside of work, and they deserve a workplace agreement that protects their safety and quality of life.”

Mr Tracey said VICT, which is controlled by Philippine billionaire Enrique Razon, had repeatedly refused to address the issues raised by their Australian workforce.

“VICT is still in denial about why 95 per cent of the workforce has joined the union in recent years, why they have overwhelmingly rejected the company’s last two proposed agreements, and why 100 per cent voted to take industrial action,” he said.

“Workers have had enough, they are sick of being treated like robots, and they are unified in their demands for a fair agreement that improves staffing levels, addresses unsafe work practices, and brings them into line with industry standards at other Australian container terminals.

“The company tries to justify their work practices by claiming the terminal is fully automated, but up to 80 per cent of workers still undertake manual roles which can’t be done by machines.

“Regardless of whether someone performs a manual job, or works from a computer terminal, it still isn’t safe or acceptable to require them to undertake 12-hour shifts without a break, work 60 hours or more a week, or do runs of up to ten 12-hour shifts in a row.”