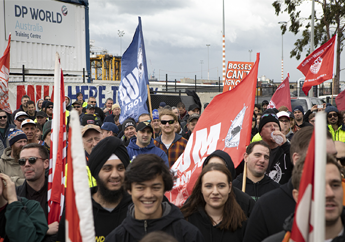 Trade unionists and community activists will converge on Swanson Dock tomorrow to throw their support behind striking wharfies who are battling to protect jobs and conditions at Australia’s largest stevedore. More than 600 wharfies are currently taking part in a four-day strike at the DP World container terminal, along with more than a thousand colleagues taking industrial action at ports in Sydney, Brisbane and Fremantle.

The Maritime Union of Australia said workers at Australia’s largest stevedore have taken industrial action in an effort to finalise a workplace agreement that would protect them against outsourcing, automation and cuts to conditions such as income protection.

MUA Victorian Deputy Branch Secretary David Ball said the community barbeque was an opportunity for the broader community to support the struggle of Melbourne wharfies.

“Wharfies didn’t take this strike action lightly, but when DP World management is insisting on an agreement that will have significant and unacceptable detrimental impacts on workers, they were left with no choice but to fight back,” Mr Ball said.

“Rather than bargain in good faith, management drew a line in the sand, telling workers they needed to withdraw their claims entirely and accept the company’s offer if they want to reach an agreement.

“What DP World need to recognise is that Australian workers have rights and are prepared to fight for those rights and protections in their agreement.

“This community barbeque is a chance for trade unionists and the broader community to not only show their support for local wharfies, but to send a loud and clear message to big business that we will not be bullied and intimidated into surrendering workplace rights and conditions.”