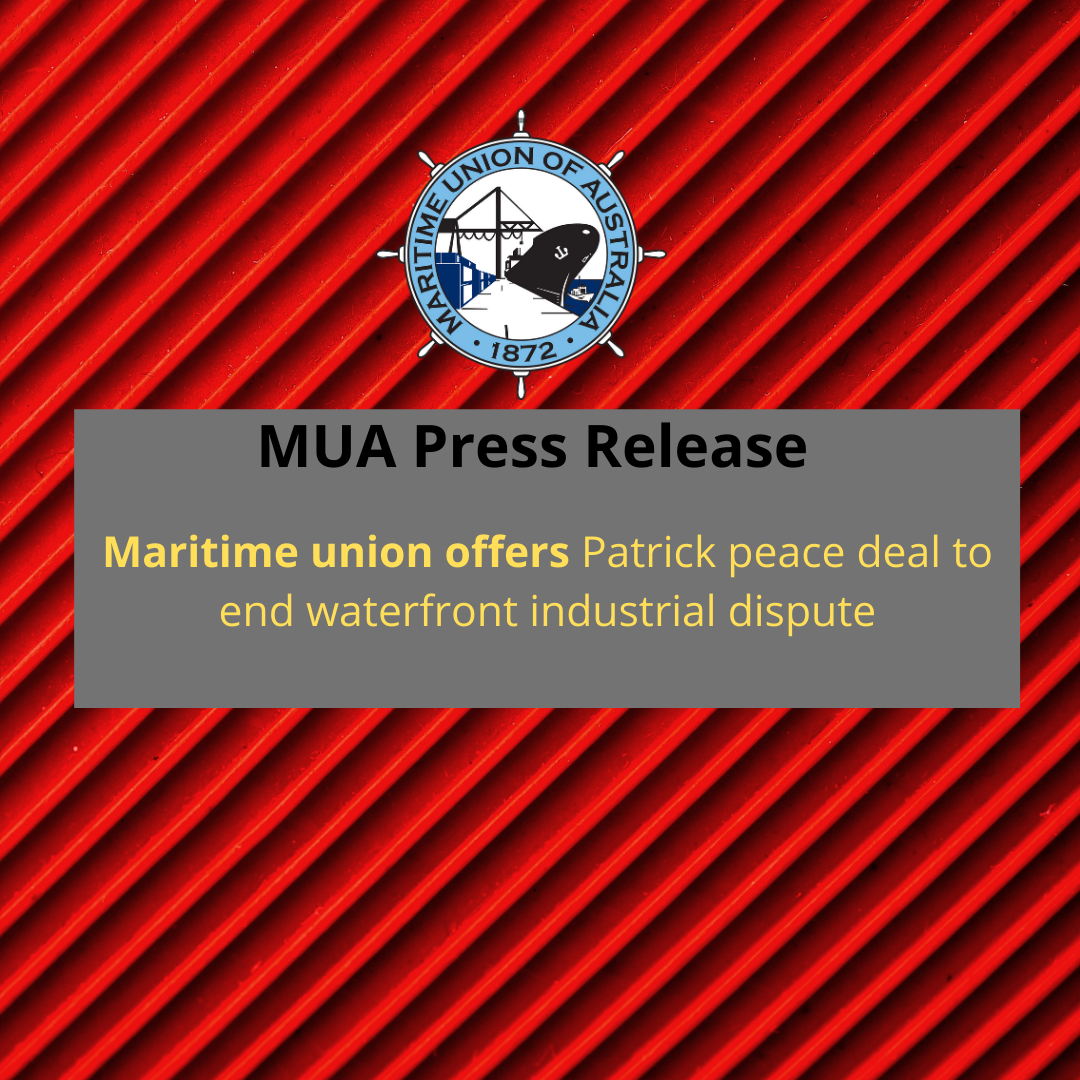 The Maritime Union of Australia will today use a conciliation hearing of the Fair Work Commission to formally offer a peace deal to Patrick that could deliver an immediate end to all industrial action at the company’s container terminals.

The union proposal would see the company’s existing workplace agreement extended for 12 months, maintaining the status quo with existing terms and conditions, while providing a reasonable 2.5 per cent pay rise to wharfies.

By extending the existing agreement for a year, it would prevent any form of protected industrial action from occurring, providing certainty for Patrick, workers, and the Australian community.

MUA National Secretary Paddy Crumlin said that while the union rejected Patrick’s outlandish and baseless delay claims, it was acting to address the concerns of the broader Australian community.

“When the MUA and Patrick sit down for a conciliation hearing before the Fair Work Commission today, the union will be putting forward this genuine, reasonable, and fair peace offer that could bring the current dispute to an immediate end,” Mr Crumlin said.

“The union proposal would see the existing workplace agreement rolled over for another 12 months, maintaining the status quo in relation to workplace rights and conditions, while providing a reasonable and affordable 2.5 per cent pay increase to wharfies.

“Our proposal does not seek to modify a single word of the existing agreement, so there is no change to the arrangements that Patrick has successfully and profitably operated their container terminals under.

“This peace deal would result in the immediate end to all industrial action at Patrick container terminals, now and for the duration of the agreement.

“It would provide certainty for farmers, exporters, and the general community, and allow Patrick and the union to refocus our efforts on the ongoing challenges posed by the COVID crisis.”

Mr Crumlin said if Patrick was serious about resolving the dispute in the interest of their customers and the broader community, they would accept the union’s genuine offer.

“The truth is, this dispute has never been about money, it’s been about Patrick’s desire to slash the conditions of their workforce under the cover of the COVID crisis,” he said.

“If the company steps back from their proposal to slash 50 pages of conditions from the current agreement — clauses that govern things like rosters, hours of work, and family-friendly provisions — we could have an agreement today that ends this dispute.

“By locking in a 12 month peace deal, it also gives both parties the opportunity to come together in a mature way and undertake genuine bargaining about what a future agreement would look like.

“If Patrick refuses this peace offer, the Australian public will be left in no doubt which party is responsible for escalating this unnecessary conflict at such a difficult time for the nation.”