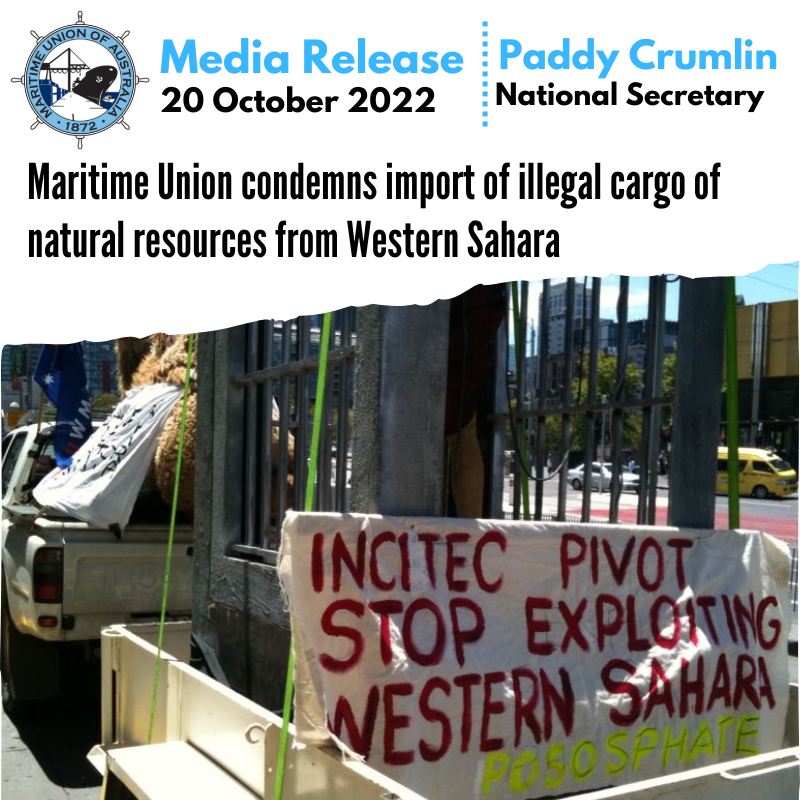 The Maritime Union of Australia condemns the actions of Incitec Pivot, an Australian company, which has recommenced importing illegal cargo from the occupied Western Sahara through the Port of Geelong.

The Clipper Isadora vessel has discharged 33,000 tonnes of plundered natural resources – a cargo of phosphate mineral rock – worth A$15 million at the bulk terminal in Geelong.

This represents a resumption in trade of a commodity extracted from a country confirmed by the United Nations General Assembly to be the subject of an illegal occupation by neighbouring Morocco. It is the largest and most populous territory on the United Nations’ list of Non-Self Governing Territories. The situation for the people of Western Sahara and its quest for independence is analogous to the plight of the East Timorese, which came to a head in 1999.

As a matter of international criminal law, the export and sale of Western Sahara’s phosphate rock – a non-renewable resource – is a war crime.

“The Maritime Union has a long and proud tradition of solidarity with international campaigns for sovereignty and self-determination, and we join with representatives of the Saharawi people here in Australia in condemning Incitec Pivot for their decision to recommence trade in this illegally plundered resource,” said Paddy Crumlin, National Secretary of the Maritime Union of Australia.

“We must respect the sovereignty of First Nations people throughout the globe and their rights to the natural resources of their homelands. The exploration and extraction of these finite resources should be for the benefit of their true owners, not those who illegally occupy their territory,” Mr Crumlin said.

In 2017 the Saharawi government pursued civil legal proceedings against separate cargos of phosphate rock, successfully detaining cargo ships in Panama and South Africa. In determining the cargo to be the sovereign resource of the Saharawi government and people, the South African High Court observed that Western Sahara is occupied under international law and that Morocco and its state-owned companies could not lawfully purport to sell the commodity.

The MUA’s Victorian Branch Secretary, David Ball, expressed his solidarity with the people of the Western Sahara, stating that “MUA members are concerned to know they've been told to work a ship carrying an illegal, plundered cargo. Our labour here in Australia should not go towards turning a profit for those who are illegally occupying the Western Sahara,” he said.

The Maritime Union of Australia understands that Saharawi authorities are considering several possible actions including pursuit of Incitec Pivot Limited in domestic civil and criminal action, commencing further legal proceedings against the Clipper Isadora ship in subsequent countries where the ship may appear, as well as formal complaints to various United Nations agencies.