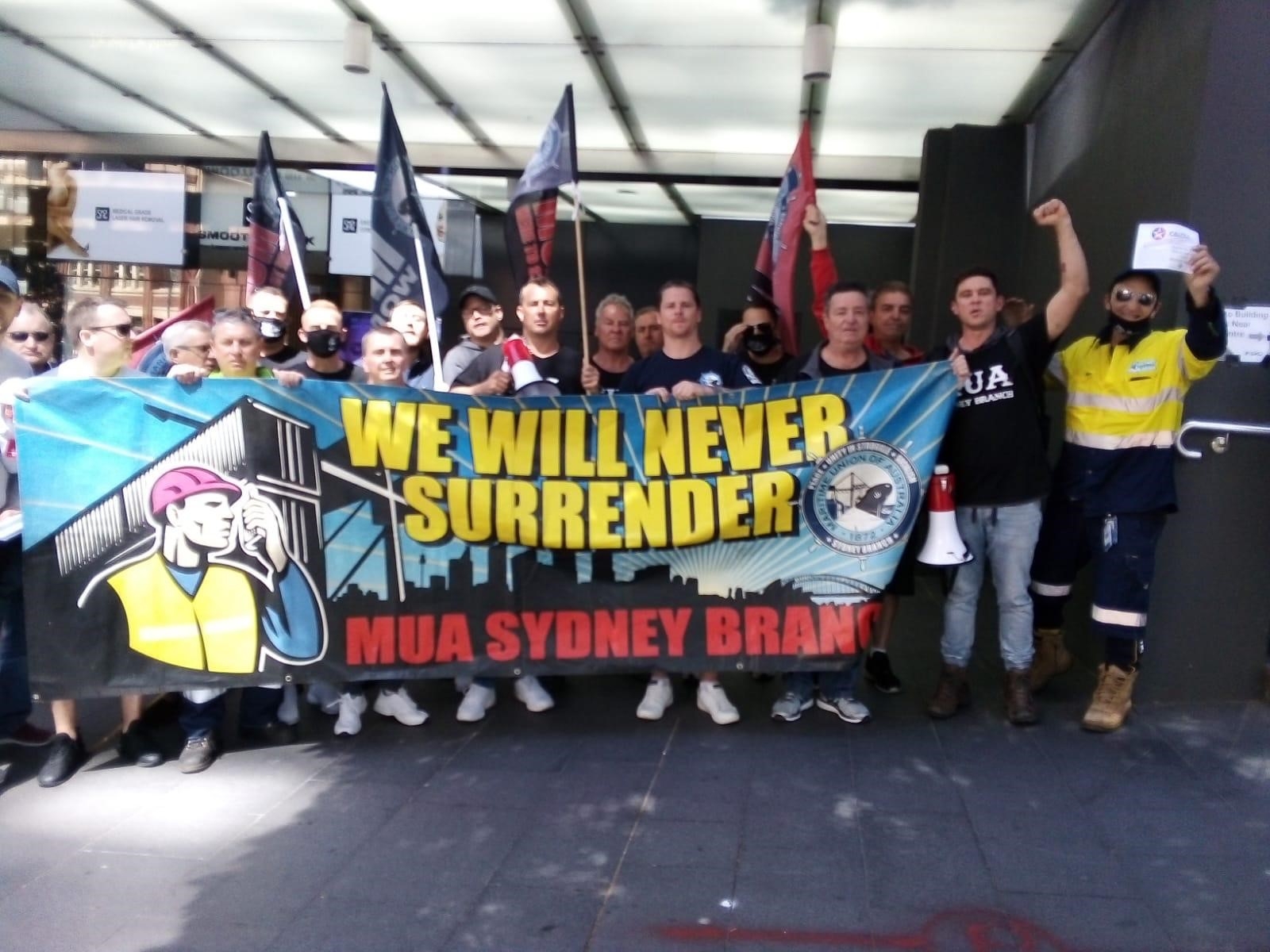 Ships lines workers in Port Botany today held a protest at the Caltex head office in Sydney over their ongoing contract with lines operator Port and Harbour Services.

MUA Sydney Branch Deputy Secretary Paul Keating said “We will defend our members right to work – no matter what the cost. We call on Caltex and all maritime industry players to withdraw all relations with this pariah company”.

Approximately 50 workers held a protest in the foyer of the head office on Market St. in Sydney, enraged at Caltex’s decision to hire Ports and Harbour Services. The workers are demanding a meeting with the Caltex Australia CEO. Despite their pledge to continue their campaign, the CEO did not come down to meet the workers.

Police attended the scene shortly after the workers arrived, and demanded that the workers leave or face arrest. The workers left chanting “Shame Caltex Shame! Shame Caltex shame!” and pledging to escalate their campaign across Australia and around the world.

“We are inviting all Australians who support justice and decency in our workplaces, to boycott Caltex products and services until they do they do the right thing by the Australian community” said Mr. Keating.

In the midst of union EBA negotiations in March this year, mooring company NMS Botany closed its doors, sacking its entire unionized workforce. The owners blamed COVID-19 and market conditions for the decision.

The remaining lines workers on Sydney harbor were forced to work around the clock to keep Sydney open and get through the COVID pandemic.

Six months later, the owners have re-launched the company “Port and Harbour Services” and commenced work in Kurnell and Port Botany without a union agreement.

Paul Keating said “Shutting down a company to try and dodge paying industry rates and undermine competitors is the oldest trick in the book. This kind of bottom feeding behavior will never be allowed to take root in the Sydney maritime industry”.

“What we see here yet again is an example of a company using the excuse of the COVID pandemic in the most cynical way.”

Ports and Harbour Services have got a contract with fuel distributor Caltex to moor and unmoor ships carrying fuel into Sydney from Monday the 21st of September. Since then MUA members have been campaigning against every vessel on land and at sea.

“This is an industrial dispute, and we’re seeing NSW Water Police escorting scab vessels, aiding and abetting an employer that is trying to take food from the mouths of union-members’ families” said Mr. Keating.

Mr. Keating said “This is only the beginning, this fight will not end until we see this Company gone. If Caltex and Ports and Harbour Services think that we’re going away they have got one hell of a shock coming. This scab company thinks they can just sail in and do whatever they want? Well we will see about that”.

The dispute with this mooring company has come in the context of building tensions with container stevedoring operators in Port Botany.

“Port and Harbour Services seems to think that the MUA is distracted by what's happening with the stevedores and they can slip under the radar. They have badly underestimated how seriously our members take this kind of threat.”

This dispute comes at a time that Caltex Australia is seeking to distance itself from anti-union corporate behavior by re-branding as Ampol.

“This is classic behavior we’ve come to expect from multinational oil-barons. This is Caltex’s chance to change its ways and do the right thing by Australian workers” said Mr. Keating.

Solidarity and support has begun to flow from far and wide. This kind of behavior flies in the face of the values of our communities, and our communities will not tolerate it. The port communities and its surrounds despise scabs and the companies that employ them. There should be laws that protect Australian workers from sham contracting, phoenix companies and police protected union busting.”

“We will never allow union busting in port botany – not now, not ever”.

Further community actions on land and at sea will be escalating over the coming days if Caltex or any other Company does not cancel its contracts with Port and Harbour Services.