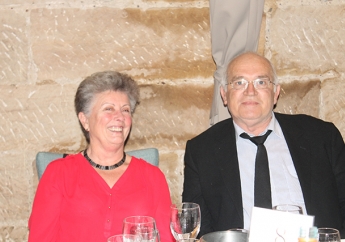 The domestic and international maritime community is in mourning today following the death of the manager and founder of Hunterlink Recovery Services, Paul Karras.

Paul, 63, passed away on Friday afternoon after recently being diagnosed with liver disease.

Tributes from across the nation and around the world are now pouring in for man greatly admired for his compassion, professionalism and selfless commitment to others.

"Vale Paul Karras. A man of deep compassion and humility who dedicated his life tirelessly to the assistance and welfare of others. Now at peace,” Crumlin said.

"Paul was the much admired and respected Manager of Hunterlink who was recently diagnosed with a liver disease and although the prognosis was not good, the expectation was that he would be with us for longer.

"Regrettably, it was more aggressive than predicted and Paul’s life has been tragically cut short."

Crumlin said Paul had been ringing him regularly to plan his return to work, notwithstanding the gravity of his medical condition.

Hunterlink Recovery Services was established as a response to the need for support, recovery and welfare within the maritime industry.

Through the support of union, employers and community, Hunterlink expanded since its inception in 2010 to become a 24-hour provider of services, not just for local seafarers but also international seafarers visiting Australian waters.

Hunterlink Recovery Services won the Seafarers Welfare Award at the Lloyd’s List Australian Shipping & Maritime Industry Awards in 2013 and had been repeatedly praised for its work by the ITF, including when it took a leading role in counselling the seafarers who were caught up in a string of suspicious deaths aboard the infamous 'Murder Ship' the Sage of Sagittarius.

"I have known Paul for many years through his long and dedicated career of helping people with mental illness, disabilities and with addiction issues in the Newcastle region,” Crumlin said.

"He was the logical choice for inaugural Manager when the union, in partnership with the CFMEU (Mining and Energy Division), decided to pilot the establishment of a workers rehabilitation and counselling service, based in Newcastle, in 2010.

"That program focused on providing counselling, early intervention, housing and other support for many of our and other union members, international seafarers and others seeking a way through enormous difficulties in their lives.

"Through the network of superannuation funds particularly Maritime Super and the MMPCU, together with some employers through the EAS program, along with the ITF and ITF Seafarers' Trust, many lives have been reclaimed and saved.

"Over the past 4-5 years Paul’s professionalism, his dedication to helping workers and their families and his personal charm have seen Hunterlink grow from a small operation in Newcastle, to a national organisation that has commanded respect across all industry stakeholders, and government, and which is now on the cusp of further international expansion.

"Paul will be sadly missed by not only the union and its officials and members, and others in our industry, but particularly by the thousands of people he and Hunterlink have counselled and assisted.

"His personal touch will resonate and remain with them and us for many years to come.

"Paul's greatest wish he told me recently was that his and Hunterlink's work continues."

ITF Australia Coordinator Dean Summers said Paul would be remembered by transport workers the world over.

"Paul will be sadly missed but his legacy for transport workers and in particular seafarers will be realised for a very long time," Mr Summers said.

"I am gutted and deeply saddened to hear about the passing of such a great man,” Patchett said

“All of us in Victoria continue to try to live and work as best we can as a result of our loss of highly respected and loved member, Anthony Attard.

“Without Paul's professionalism and his great personal caring nature to all of us I doubt whether we would be where we are today because of what he did for all of us.

“Sincere condolences to his wife and family from all of us in Victoria. We will hold a minute’s silence for him next week.”

MUA National Safety Officer Matt Goodwin said Paul's work at Hunterlink had changed how we deal with workplace tragedy in the maritime industry.

"Paul was one of the first responders when Anthony Attard was killed in May last year," Goodwin said.

"The workers at Toll were shellshocked by what had happened. I was very proud of the role Hunterlink played and Paul in particular."

“This is terrible news, Paul was really one of the good guys,” Keane said.

“We shall do all that we can to ensure that his outstanding work will carry on through our continued support for Hunterlink.”

Queensland Branch Secretary Mick Carr said this was "the sad loss of a great bloke”.

"Paul's commitment to such an important cause was resolute, carried out consistently, professionally and without fuss,” Carr said.

"The world will be a poorer place with his passing."

“Paul was a good bloke who would go out of his way to help people,” Cain said.

"Paul played a massive role in supporting many of our trainees through some serious issues and I know he saved the lives of a few,” Earle said.

MUA Newcastle Branch Secretary Glen Williams said this was very sad news and that Paul had been taken away too quickly.

"I developed a very close relationship with Paul over the past few years and will miss him dearly,” Williams said.

"He was a decent human and a quality person."

In addition to providing any required support to Paul’s family, the MUA is also supporting Hunterlink Program Coordinator Gavin Kelso through this difficult time.

Paul's was laid to rest at Morriset Cemetery on April 10.