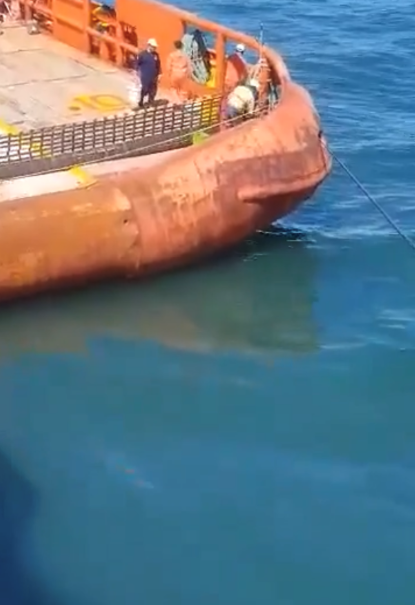 A maritime pollution incident in Port Phillip Bay this week, involving diesel spilling overboard during refuelling operations, appears to have been caused by the use of inexperienced foreign seafarers who had been flown into Australia to replace the vessel’s local crew.

The incident occurred when the new crew were attempting to refuel the MMA Coral, an offshore supply ship operated by MMA Offshore, for the first time after replacing the Australian crew last week.

Authorities, including the Australian Maritime Safety Authority, Environment Protection Authority, and Port of Melbourne, are investigating the spill, which occurred shortly after 11am on Wednesday.

The Maritime Union of Australia said the previous crew of Australian seafarers had disembarked at Barry Beach Marine Terminal, in Gippsland, before the vessel was sailed to Melbourne by a group of foreign seafarers to refuel ahead of a planned voyage to Karratha in Western Australia.

“This significant environmental incident was the direct result of skilled Australian seafarers being replaced by a less experienced foreign crew that was unfamiliar with this vessel,” MUA Victoria Branch Secretary Shane Stevens said.

“Thankfully, our members onboard the refuelling barge immediately halted the transfer of fuel once the spill was spotted.

“They believe the spill occurred because the crew of the MMA Coral instructed for the fuel to be pumped at too high a pressure due to a lack of knowledge about the correct procedures for the ship.

“While the refuelling operation was meant to involve the transfer of approximately 200 tonnes of fuel onto the MMA Coral, the spill thankfully only involved a minimal quantity due to the quick thinking of the crew of the refuelling barge, who spotted the spill and immediately halted operations.

“This incident, and the significant environmental damage it could have caused, would have been prevented if skilled Australian seafarers with an intimate knowledge of the MMA Coral were still onboard.

“The MMA Coral remains in Port Phillip Bay, and still needs to take on approximately 100 tonnes of fuel ahead of its departure for Karratha, so there remains a need for vigilance to prevent a repeat incident.”

“This vessel was sailing between Australian ports, operating entirely in Australian waters, so should have been crewed by Australian seafarers with the skills, training, and knowledge to safely operate the vessel,” Mr Bray said.

“Instead, in an apparent cost-cutting exercise, MMA Offshore flew a team of foreign seafarers into Victoria — in the midst of the COVID crisis — to replace the Australian crew onboard the vessel.

“The fact that the very first refuelling undertaken by this replacement crew caused a diesel spill into Port Phillip Bay highlights how the Australian environment is put at risk by this approach.

“The Australian Government needs to stop providing temporary licenses and travel exemptions to shipping companies to allow them to utilise foreign seafarers on coastal shipping routes, and instead protect local jobs, safety, and the environment by insisting they utilise skilled Australian crews.”