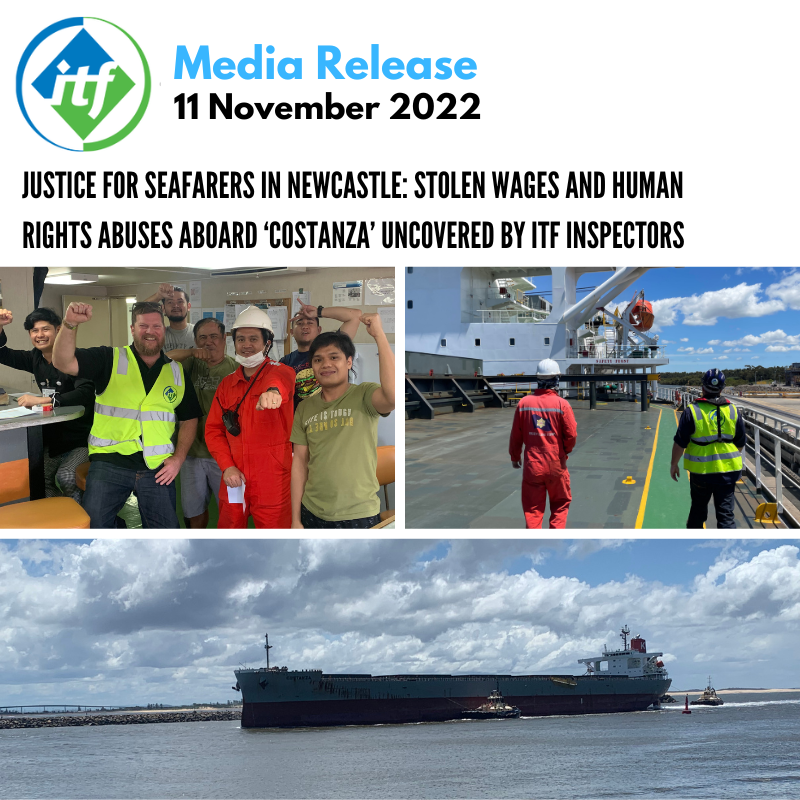 In the face of meddling, obstruction, and brazen breaches of international law alongside the NCIG coal terminal at Kooragang Island this week, the International Transport Workers Federation (ITF) inspectorate has delivered justice for a crew of international seafarers aboard a coal ship operated by Orient Line Corp, headquartered in Japan.

Earlier this week, ITF inspectors performing random inspections at the Port of Newcastle discovered a shocking case of wage theft and human rights abuse aboard the bulk cargo ship Costanza, with crew members denied their legal right to shore-leave and robbed of US$66,500 (AU$100,000) in wages owed to them over three months.

Rectification plans in place before ship sets sail for Japan

As a consequence of the ITF inspectorate’s findings, the Australian Maritime Safety Authority (AMSA) detained the ship in Newcastle and has enforced compliance with Australian and international laws, delivering wage repayments and a repatriation plan for crew members at the next port-call, along with shore-leave in the meantime for crew, some of whom have been aboard for almost 11 months.

One crew member, on condition of anonymity to speak freely about the conditions aboard the ship, told the ITF inspector Dan Crumlin, "I really want to get off and just to walk around, just to touch a tree and refresh, this will be very good".

The ITF also arranged for access to free, high-speed WiFi via Seafarer Connect, a project by the Tas Bull Seafarers Foundation to provide reliable, fast and free WiFi to visiting seafarers.

“Just being able to provide the means to call home or join a video call with family members on the other side of the globe is a massive boost to the mental health of seafarers who’ve been treated so poorly and basically imprisoned on this ship”, said Mr Crumlin.

The issue of seafarers being denied shore-leave is under heavy scrutiny by the ITF and AMSA, with there being no legal basis for preventing crew from taking time off while at port to disembark and enjoy some respite away from the ship. AMSA has repeatedly threatened rogue shipping companies and agents with legal action if they refuse to permit crews access to shore-leave while berthed in Australian ports.

Speaking after the shore-leave fiasco was eventually resolved, the ITF Australian coordinator Ian Bray said “This disgraceful episode leaves significant, unanswered questions about the fundamental rights of seafarers being denied in the Port of Newcastle as well as the role of organisations like Mission to Seafarers in delivering or failing to deliver the means to access such leave entitlements.”

Mr Bray also expressed disappointment with the role played by coal terminal operator, Newcastle Coal Infrastructure Group (NCIG); “We had an obstructionist and uncooperative terminal operator in NCIG hampering our progress. We said all along that we are not here to visit NCIG, we don’t need to talk with NCIG, we just need them to provide safe access and egress to the ships so we can talk to the people that matter, the seafarers!”

The ITF Inspectorate in Australia is now calling on AMSA to investigate who at the Port of Newcastle, NCIG or the shipping line itself interfered at the last minute in the lawful right of seafarers to access shore-leave, a human right for international seafarers conferred within the Maritime Labour Convention, an international legal instrument managed by the United Nations through the International Labour Organisation.

“These questions need answers and whilst they remain unanswered, uncertainty exists about the Port of Newcastle, NCIG and indeed Mission to Seafarers’ ability or willingness to uphold and protect basic human rights under the international laws to which Australia is a signatory,” Mr Bray said.