Industry Wises Up to Automation 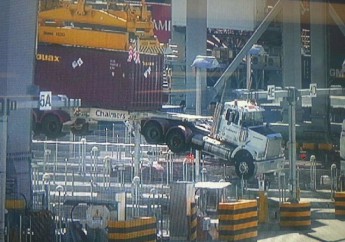 Union and industry have found common cause in denouncing the practice of automation without consultation, Assistant National Secretary Warren Smith reports.

The article, available here, is behind a paywall. So we’ll provide some of our favourite excerpts for you:

One freight forwarder quoted described DP World Brisbane as “rubbish”, while another said dealing with the stevedore was a “nightmare”.

John Lines, managing director of shipping line ANL, was reported as blaming the automated system for the awful service delivery at the terminal.

We have long criticised the callous and frenzied way automation has been introduced into Australia at all major terminals and now we’re not alone.   Automation in practice is showing that it is not the panacea for productivity in Australian ports, proven by the fact business is now running their own anti-automation campaign.

DP World was unfortunate enough to be singled out in this instance but it is not not alone - Patrick, Hutchison and the new Melbourne operator ICTSI are all embracing automated modes of operation and not one of the companies that has already automated has demonstrated that their productivity across the berth is higher than their human-driven operations in other states.   Wharifes know that in these ports when conventional operations are run side-by-side with automated operations, the conventional operation win hands down every time.

The massive ‘productivity gains’ for stevedores are based on the fact that wharfies are being thrown on the scrapheap at the same time as service for shipping lines and land-based transport companies seem to be thrown on the same scrapheap.   At automated sites and at sites on the cusp of automation (Patrick & DP World Port Botany) we have a situation where morale is at an all time low and workers feel like they are under constant surveillance and for what? Not for better customer satisfaction.

Our concern is that customers running from one stevedore to another will create massive instability not just for the industry but for us working in it.   Are we going to be looking at a situation where we have to suffer cycles of redundancies and rehiring, inevitably causing a massive training burden on the companies that will undoubtedly hit their profit margins.

I think this is an opportune time to introduce a labour pool to stop this uncertainty that I am sure shareholders, customers and workers would all stand to benefit from.

This latest news has shown it is now foreseeable that the likes of Patrick and DP World will have to go cap-in-hand to their shareholders and explain how their massive capital expenditure projects could not be justified. Maybe, one day, the management will sit back and reflect; “perhaps we should’ve listened to the MUA.”