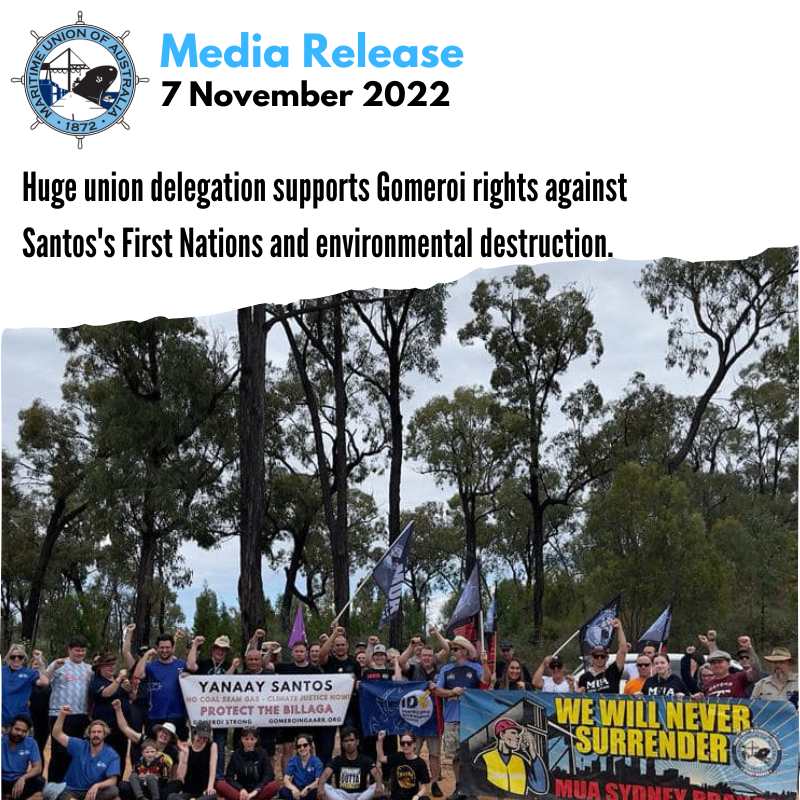 The union movement has mobilised in solidarity with the Gomeroi people’s struggle against the climate-wrecking Pilliga/Narrabri coal seam gas mining operation on Gomeroi lands in the Pilliga forest.

A large gathering of unionists travelled to Coonabarabran to stand in solidarity with the Gomeroi people demanding that Santos immediately withdraw the four “Future Acts Determination Applications” lodged with the Native Title Tribunal.

Gomeroi have never ceded sovereignty and given no consent to coal seam gas. They have cared for these lands and waters since time immemorial, fought to maintain connection despite violent, racist policies of exclusion and stood on the frontline of protests against destructive fossil fuel projects for generations. The union movement has come out in support of the Gomeroi people identifying that the struggles of First Nations people are the struggles of the union movement.

Unions NSW Assistant Secretary Vanessa Seagrove said, “We are proud as unions to stand alongside the Gomeroi People in their right to protect the Pilliga Forest. Unions NSW affiliates voted on Thursday night at the council meeting to commit support for the Gomeroi People and their land rights. This includes writing to the Federal and State Governments to withdraw any support for the 850 gas wells being proposed by Santos.”

“This weekend has shown me first-hand how important this land is culturally but also what this would do to the environment. It cannot go ahead and we will continue to fight alongside the Gomeroi People - as unions have done over many years - for as long as it takes,” said Seagrove.

Paul Keating, Sydney Branch Secretary of the Maritime Union of Australia, said “Our union is committed to the ongoing struggle in support of the Gomeroi people against this project. Our support isn’t just moral support. We will continue to mobilise to overturn and reject this environmentally destructive project.”

“We are determined to not allow this project to succeed and have committed to ongoing solidarity and direct action, including blockades, involving our members and the entire trade union movement”, said Keating.

Damien Davis Frank Branch Secretary of the St Vincent’s Public Hospital Sydney said “As a member of the NSWNMA we stand proudly beside the Gomeroi people to help defend the health of this land. Health of country equals health of people and as a nurse it is our duty to advocate for the health of our planet so that future generations have clean water and clean air. I’m proud that the NSWNMA has voted to support the Gomeroi people and is committing to being on the ground, making sure this climate and health bomb doesn’t go ahead.”

AMWU NSW State President Keith Lang said, “The AMWU stands side by side with the Gomeroi people in their fight to preserve the Pilliga wilderness for future generations. The Artesian Basin cannot be compromised for capital profit.”

Tamworth based Country Organiser Katie Sullivan said, “Teachers, students and their communities here in the Pilliga, and across NSW will lose their homes, schools and livelihoods. NSW Teachers Federation are committed to supporting the Gomeroi Nation and rejecting Santos’s gas projects and any other projects that threaten to destroy our country here or anywhere else.”

IEU NSW/Act Branch Assistant Secretary, David Towson said, “The Gomeroi have spoken loudly and clearly. If we believe in aboriginal voice, we need to start listening to those voices. The IEU is proud to stand alongside so many unions in support of the Gomeroi’s campaign to save the irreplaceable lands and waters of the Pilliga. This environmental and cultural vandalism must end.”

Local aboriginal community representative of the Gomeroi people of Coonabarabran Suellyn Tighe said, “First Nations people are used to promises. What we aren’t used to is follow through. It was a pleasant surprise to see the number of delegates representative of different unions travel to Coonabarabran to experience the beautiful Pilliga and to hear our voices and understand the concerns of the Gomeroi Nation.”

Instead of gas-fired dispossession, we urgently need to be strengthening First Nations rights and investing heavily in a just transition away from fossil fuels, with large-scale employment in renewable energy and sustainable development.

This project cannot be allowed to proceed. If the Native Title Tribunal will not defend Gomeroi rights, we pledge to support a fight that will stop Santos on the ground.