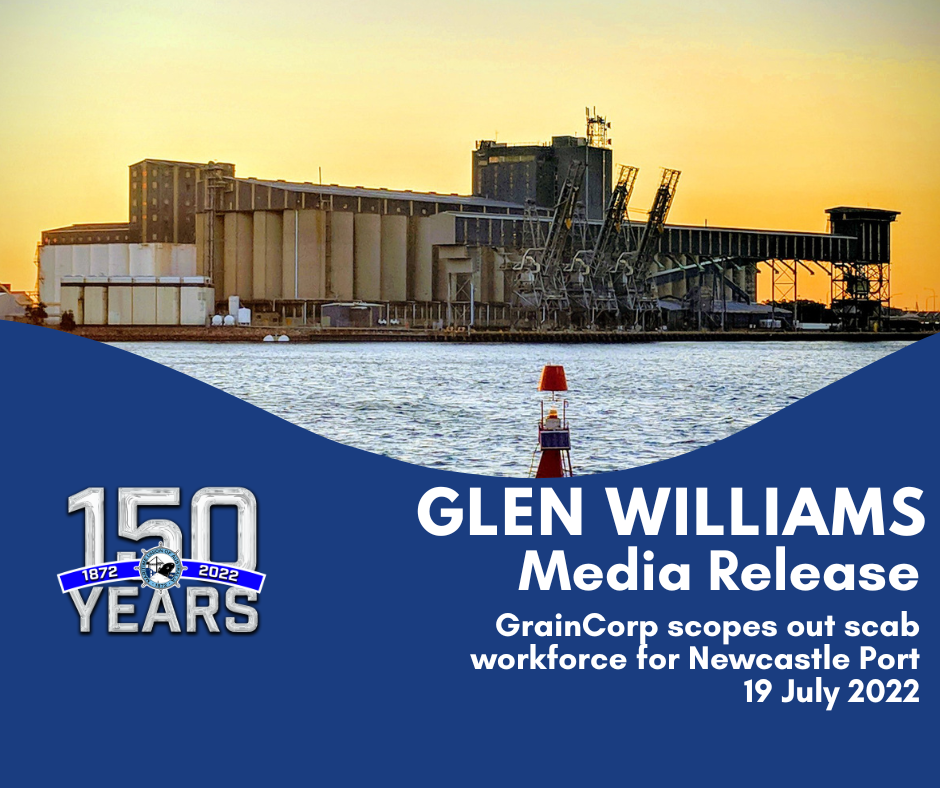 Against a backdrop of record profits and forecasts of another bumper profit next financial year off the back of favourable La Nina conditions, GrainCorp Limited has been caught scoping out a scab workforce for its Port of Newcastle operations, according to the local branch Secretary of the Maritime Union of Australia, Glen Williams.

While the company is purporting to negotiate in good faith with the union for a renewal of the existing Employment Agreement, GrainCorp secretly brought contract labour hire company MCC World International through the Newcastle terminal today to assess the suitability for a takeover by a scab workforce.

“This behaviour is nothing short of disgusting from GrainCorp. They posted a record profit during the first half of this year, with a net profit after tax of $246 million, and their first action is to train up scabs and develop a plan to lock out their existing workforce,” Mr Williams said.

“Any other company would offer their employees a fair pay rise for the contribution made to their massive profitability, but the management of GrainCorp don’t want to share a cent of it with the people whose hard work has actually driven these profits,” he added.

After two consecutive bumper crops from farmland throughout the east coast of Australia, GrainCorp’s fortunes have further risen on the back of conflict in Ukraine, which have driven up grain prices worldwide.

However, over the past ten years, often under drought conditions, GrainCorp workers at Newcastle port have accepted minimal pay increases below CPI. With inflation running at over 5% this year and record profitability for the company, long term employees of GrainCorp have been looking forward to a pay rise that kept pace with the cost of living and rewarded them for their many years of loyal service to the company.

“This is a perfect illustration of a management class that is totally out of control and totally deluded about the underlying causes of their commercial success. The last thing they should be doing off the back of their incredible run of good fortune is seeking to replace their workers with scab labour whilst they bargain for a new employment agreement,” Mr Williams said.

The Maritime Union has called for GrainCorp’s Managing Director and CEO, Robert Spurway, to come clean on the company’s secret plans to bring in a scab workforce to replace the hard working, loyal workers currently employed by GrainCorp in Newcastle.

“Having now been caught trying to train up a scab workforce, Mr Spurway needs to come clean with the community about what he has planned for the grain terminal at Newcastle Port, because he should know that this sort of behaviour is not welcome in this town,” Mr Williams said.