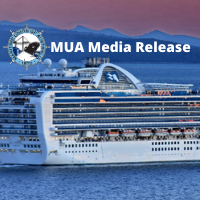 The Maritime Union of Australia is urging the Federal Government to urgently repatriate all crew members on board foreign cruise ships, other than those directly responsible for marine operations, to address the growing humanitarian crisis.

With reports that up to 11,000 foreign workers remain on board 11 foreign cruise ships in Australian waters, the union said it was alarmed but unsurprised by the ongoing failure of the industry to help workers return to their home countries.

“The plight of the thousands of crew members on board foreign cruise ships anchored in Australian waters is an emerging humanitarian crisis that requires immediate government action,” Mr Crumlin said.

“The Australian Government must urgently act to allow the safe repatriation of all crew members not essential for marine operation to their home countries.

“The crew of these ships must be tested for COVID-19, and the ships sterilised under the highest Australian standards, with crew members then allowed to disembark through Australian ports and flown back to their home countries at the expense of their employers.

“All relocation, travel, and medical expenses must be covered by the international cruise companies like P&O, Carnival, and Royal Carribean.

“Not a single cent should be paid by Australian taxpayers to support or bail out these international companies that have spent years using flags of convenience and opaque ownership structures to avoid paying local taxes and exploit workers.”

ITF Australia Coordinator Dean Summers it should now be abundantly clear to all Australians the threat posed by flag of convenience shipping to public health, the economy, environment and national security.

“The current Federal Government’s maritime policies have encouraged the use of flag of convenience vessels in both domestic shipping between states and territories, along with the cruise ship industry,” Mr Summers said.

“These ships have no connection to Australia, other than sourcing huge profits from our community for faceless multinational corporations, while their home ports are in the Caribbean or West Africa.

“At a time when the COVID-19 pandemic is making our country’s supply chains extremely vulnerable, our community is at the mercy of cheap flag of convenience ships registered in countries including Panama, the Bahamas and Liberia to deliver essential food, fuel, and medical supplies.

“It should be abundantly clear to all Australians that flag of convenience shipping is responsible for serious threats to the nation’s health, economy, environment, and national security.”

Mr Crumlin commended Australian-based cruise ship operators like Queensland-based Coral Cruises and West Australian-based True North, saying both had rejected the policies of the former Abbott Government which had encouraged them to abandon Australian registration for their vessels, despite only operating in Australia.

“These cruise ship operators which have chosen to register their vessels in Australia, pay tax here, and employ local workers should be commended,” he said.

“As we start to imagine a future beyond the COVID-19 pandemic, we are urging the Federal Government to ensure the use of ships whose registration has a transparent link to the country of beneficial ownership.”

The MUA is urging the Federal Government to undertake a number of actions in response to the cruise ship crisis, including:

1. All crew, other than those directly responsible for marine operation, on board foreign cruise ships must be repatriated home through Australian ports and airports at the expense of their employers. These ships must be brought alongside crew tested and ships sterilised under the highest Australian standards;

2. That no taxpayer money or in kind support be given to this industry in any form other than to Australian registered and crewed vessels, where needed;

4. The development of a policy to further build an Australian cruise ship industry, employing Australian workers and on ships registered in Australia; and

5. That no cabotage exemptions be given to international flag of convenience cruise vessels working around the Australian domestic cruise ship market.